In March 2006, across the street from the not-yet-hip Trinity Bellwoods Park, a storefront window on Queen Street West held a teaser display: a brown leather armchair piled with books. Behind the chair was a black curtain obstructing the rest of the coming-soon new store from view. Behind the black curtain, two employees sat amid piles of publisher catalogues entering orders while the two owners and a carpenter put the finishing touches to the shelving, the flooring, and the office. Now and then a curious passerby would push open the door: “What are you going to be?” they’d ask. “We’re going to be a bookstore.” “Well, that’s brave. Good luck!” And off they’d go. 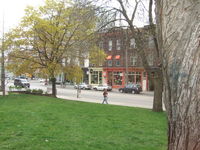 A decade ago, opening an independent bookstore probably did seem brave. In the years leading up to Type’s opening, big-box, national chains (Indigo Chapters here, Barnes & Noble and Borders to the south), able to order in massive quantities, commanded the best discounts from publishers and were able to offer the biggest choice to customers at the lowest price. Independents, often with a small inventory and just a single retail location, struggled to compete.

And yet, instead of viewing the landscape as forbidding, Type co-owners Joanne Saul and Samara Walbohm, who met while completing PhDs in Canadian literature, felt that the growing absence of the kind of bookstore in which they’d most love to shop was precisely the reason to try and do something about it.

“We opened Type because we had seen so many indie bookstores die,” Saul told me in an email. “In a landscape of big box and online book-selling we believed (and we still do) that people craved a hands-on, community-based book-buying experience.” 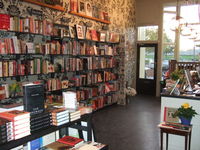 Sure enough, Type’s brand of hands-on book buying became quickly beloved by the local and literary community alike. The store is a regular venue for book launches and literary events, including an instore book club, commands a dedicated following on Instagram, thanks to its good-looking and on-trend inventory showcased by community manager Serah-Marie McMahon’s photography, and boasts creative, whimsical window displays that capture major media attention and draw in passersby, thanks to on-staff craftician Kalpna Patel and artist Paul Dotey. Co-owner Saul is a regular books columnist on CBC Radio One, and the remaining staff includes three published authors (including one who is the outgoing Writer in Residence for this very website). No wonder then that in addition to the support of the community, Saul says, “the major factor in the store’s success, hands down, no question, is its staff.” A staff that is plugged into the community, and talented at many things in addition to selling books.

Last Friday Type held a private “thank you” party to celebrate the community that has made the store a success: the publishers’ sales reps, publicists and editors; life-of-the-store regular customers; local authors; and staff, past and present. The following day, as part of a national indie-bookstore-community celebration, they celebrated again, in a very public way, with the help of more than 20 authors playing bookseller for a day as part of the second annual Authors for Indies Day. I was at both and I can tell you that industry insiders and book-buying civilians love them a bit of Type Books.

I can’t conclude this piece without telling you I have a personal connection to all of this. Ten years ago, I quit my job as an editor in London, England and moved to Toronto on a one-year adventure. Packed in my suitcase were 14 pairs of shoes and the idealistic notion of finding a job in a nice independent bookstore. Idealistic, but not unrealistic, as it turned out. I was able to paint the backstage picture at the top of this piece because I was there, behind the black curtain, two weeks after I landed in Canada, entering the very first orders of books to be shipped to my new home’s newest bookstore. If you’ve ever dreamt of quitting your job to go and work in a bookstore, it was pretty much exactly like that.

My Canadian adventure was only supposed to last for a year, but like Type I too just celebrated ten years in Toronto. Of those ten years I’ve spent six of them (non-consecutive) on staff at the store, and even in the years in between my official comings and goings I haven’t really been away all that much, returning to work a shift or several at Christmas (truly the most wonderful time of the year at a bookstore), help plan a party, or send a few emails to media friends to talk up a Type milestone or event. The thing about a great community is that once you’ve found one, it’s pretty hard to walk away.

So happy birthday, brave Type, and congratulations to Jo, Samara, and all the staff past, present and future. It’s been an honour to spend ten years with you. Here’s to the next decade and beyond.

Becky Toyne is a publishing consultant specializing in manuscript development and book promotion. She is a regular books columnist for CBC Radio One, a bookseller and events and communications coordinator for Type Books, a member of the communications committee for the Writers' Trust of Canada, and the author of a monthly column about Toronto's literary scene for Open Book: Toronto. You can follow her on Twitter: @MsRebeccs