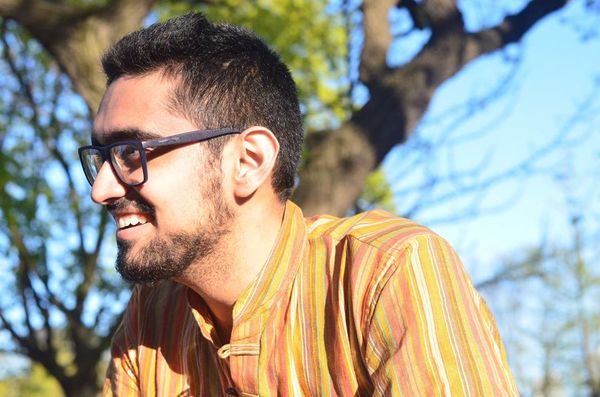 Who is the “speaker” in your poems talking to? Is there a listener within your story? Who is the narrator’s confidante?

I’ve been thinking a lot about a sense of address and I’ve come to believe that it’s a form of unspoken magic – the person being addressed, the listener in the work – that gives a poem or a story its voice.

Last month I was a finalist for the 2021 National Magazine Awards for two poems published in Event magazine. The two poems are part of a “Dear Kin” series in which I address people who are my “kin” both given and chosen, blood and not. The first time I read these poems in public was at Nandi Odhiambo’s launch for Smells Like Stars. I remember choking up as I read them, which was surprising, because I’ve never felt deeply emotional during one of my own readings before.

For many BIPOC people, tracing ancestors and family histories using textual and historical archives is like swimming alone at night. The only light is above, unreachable. Because of my mixed-race family histories and erasures due to colonization, it was especially difficult to trace one person in particular. I wrote these poems during one of these dead ends while researching family histories for my novel in progress. When I felt like I had no one to turn to, I began talking to dead people, as usual, only this time it was a little different.

Previously, the sense of address (to my kin) remained in my head: an intuited fact, unspoken and secret. The “Dear Kin” poems published recently in Event were the first ones I’ve shared which explicitly address my kin. When reading the poems aloud again after first choking up at Nandi’s book launch, I realized that I was deeply emotional because I was hearing my own voice – so clearly. It sounds obvious, but it was incredibly uncanny and new for me.

In the past, I’ve personally judged the amazingness of my own poems like so:
1) Ditch the poem for a week.
2) When you return to the poem, does it sound like you? If yes, see #3. If no, see #4.
3) Keep revising and rewrite.
4) It’s probably good enough to proceed. Wait on it a little longer.

In my personal judging system, the more unrecognizable and surprising the poem, the better it was. But after hearing my own voice in the “Dear Kin” poems for what might be the first time, I knew that it was the sense of address which had brought out my voice.

Because I was writing to my kin, I performed a kind of intimacy that made me feel so vulnerable I almost cried in public when I first read my own poems. Without the sense of address, the poems would not have the same searching voice – or the wholesome fragments of joy that enabled me to take a leap of faith in addressing the dead and my kin.

Choosing to use a sense of address has led me to my literary kin, too.

I think of Otoniya Okot Bitek’s response to Wangechi Mutu’s homage to the 1994 Rwanda genocide in 100 Days. I think of Ocean Vuong writing his novel in the form of a letter to his mother, who is illiterate. I think of Canisia Lubrin, who addresses Jejune, an invented chorus, in her long poem, The Dyzgraphxst. I think of Eli Tareq El Bechelany-Lynch, who writes poem-letters to their friends and lovers to talk about queerness and disability. And I think of Khashayar Mohammadi, whose Dear Kestrel chapbook may have been the first to inspire a sense of address in my own work.

A sense of address also completely transformed the fourth draft of my novel.

If you can find your listener, you may just begin the telling again.