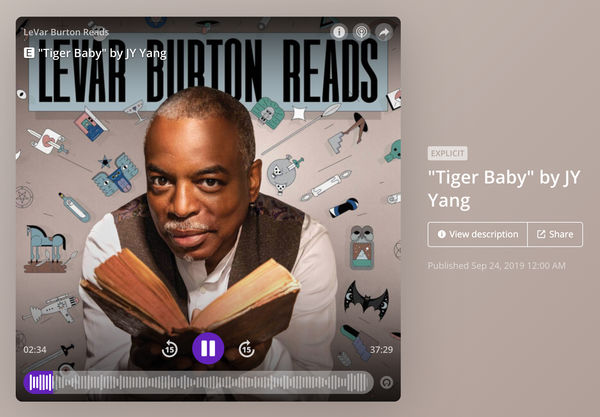 Being read to is a luxury.

Growing up, there were no bedtime stories in my household, at least none that I can remember. There were true stories traded around dinner tables of course, but there was none of what I saw in movies like The Princess Bride. There was always an abundance of books, but they were read quietly in my head upstairs in my room.

Perhaps this is why I disliked the rowdy classroom readings as a child. When my teachers would read Robert Munsch, the callbacks would swell to a cacophony, each voice trying to outscream the other. It seemed to ruin the quiet reverence of what I thought reading was at that age, a silent solitary act.

This didn’t keep me from loving voice though. I adored listening to the radio for music of course, but also for the banter built in between and the story frame that was applied to tracks. I gravitated to albums with skits and narration that painted a full narrative. As a teen, I had CDs of old radio plays like Frankenstein and War of the Worlds. When podcasting took off, I found myself engulfed in audiodramas like Welcome to Night Vale and We’re Alive.

During this pandemic, I’ve found it hard to focus. Originally, I thought it might be a chance to get to the books I’ve been meaning to read for a long time but when I hold these books in my hands, my mind refuses to keep attention. I find my eyes fluttering away from the page, fixating on a new crease in the paper or the serifs on the letter t or the shape of the paragraphs. My mind drifts in every direction, and I have to re-read sentences 3 or 4 times before actually registering them. Trying to read feels like chaos as everything seems to buzz and frenzy in all directions. What ended up allowing me to visit stories again was the act of being read to.

Téa Mutonji has been telling me about how she loves audiobooks for a long time, but this pandemic is the first time I’ve actually tried them. And I owe Téa an apology for not listening to her sooner, because audiobooks have been a balm during this time.

I still think of being read to as a luxury and in some ways as an act of love. Even though these are pre-recordings, they feel like a gift to me. As my mind has become more unfocused, the sound of a voice is what allows me to draw myself back and nestle into these stories.

Here are a few things that I have been listening to during this time:

What can I say about Ocean Vuong that hasn’t already been said? Please instead accept this repetition: this novel is a letter from a son to a mother who cannot read, and recounts the narrator’s family history that begins in Vietnam and moves its way to America. But to distill it as just that feels false. Even the words urgent and graceful and moving, which have been used in so many reviews, falls short of describing the beauty and impact of this book. The audiobook is narrated by Ocean Vuong, and at times it feels like one long poem. Every line feels expertly crafted, every metaphor linking with one another in a vast constellation.

In LeVar Burton Reads, we’re brought back to the time of Reading Rainbow. In each episode, LeVar Burton picks a short story to read. There is no specific criteria - he just loves each of these stories. The podcast features the tales of so many other brilliant authors, including Toni Morrison, Austin Clarke, Carmen Maria Machado, and more.

In “Tiger Baby,” JY Yang creates a world in which a woman is haunted by dreams of being a tiger, and is interwoven with William Blake's “The Tyger.” This episode is one that I come back to frequently. It dismantles and reassembles the mundane, and the repetition of the poem throughout gives it a beautiful meter to be read aloud.

The Slowdown has been called a "literary once-a-day multivitamin." It's a 5 minute podcast with new episodes every weekday that revisits poetry. Each episode is hosted by Tracy K. Smith who is a former United States Poet Laureate and acclaimed author and educator.

“In Which Our Wants Are Worlds” is a poem by Jasmine Reid that struck me the moment I heard it. Tracy K. Smith’s introduction touches on the way “happiness in practice can feel different from our long cherished theories of happiness.” I felt primed to receive Reid’s poem in an aching, longing way, reading: “We bought a vehicle of want./ Our hearts rot oppressively in the trunk.”

If you didn’t know, Audible Canada has released a few of the books that won the Scotiabank Giller Prize for free. I read Fifteen Dogs when it was first published. I love short books, magical tales, and stories with a strong sense of place. This makes Fifteen Dogs the perfect combination for me. This novel focuses on (as the title suggests) a group of 15 dogs who are kennelled at a veterinary clinic in Toronto. When they're gifted human consciousness because of a bet between Hermes and Apollo, the dogs escape and set up a new society in High Park.

Bonus: This is Love Episode 2: Something Large and Wild (Podcast)

This doesn’t count as being read in the same way as the others do because it incorporates interviews, but I wanted to include it anyway. This is Love is a non-fiction podcast by the producers of podcast Criminal. I was hesitant to try this podcast because of the word love in it and the possibility of saccharine feel-good stories. But much like Criminal is a sidestep from true crime, This is Love is a collection of surprising, genuine stories about connection.

This episode takes listeners to the Pacific Ocean with interviewee Lynne Cox. While she's known in the public eye as an American long-distance open-water swimmer, this story takes you back to when she was a teenager and her encounter with something unexpected.