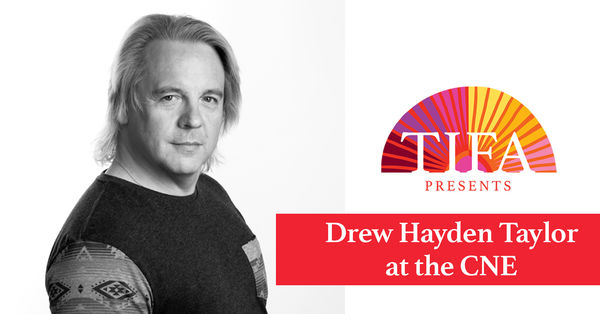 The Toronto International Festival of Authors returns to the CNE to kick off its 40th Anniversary celebrations with a look into the illustrious career of Drew Hayden Taylor. Drew will take the stage with fellow author Kevin Hardcastle to discuss his work as an Indigenous writer, filmmaker, journalist and playwright, and provide a sneak peek into his upcoming book, Chasing Painted Horses.

In partnership with the CNE

Kevin Hardcastle is a fiction writer from Simcoe County, Ontario. He studied writing at the University of Toronto and Cardiff University. He was a finalist for the 2012 Journey Prize, and his stories have been published widely in Canada and anthologized internationally. Hardcastle’s debut short story collection, Debris, won the Trillium Book Award and the ReLit Award for Short Fiction. His novel, In The Cage, was published to critical acclaim in 2017, and has recently been translated into French and German by Editions Albin Michel and Polar Verlag.

Drew Hayden Taylor is an Ojibway from the Curve Lake First Nations in Ontario and an award-winning playwright, journalist, short-story writer, novelist, commentator, scriptwriter and documentarian. As a writer/creator, he strives to educate and inform about issues that interfere with, reflect on and celebrate the lives of Canada’s First Nations. With around 30 books to his credit, including the series that considered First Nations’ lives through the themes of Me Funny, Me Sexy and Me Artsy, Taylor turns his attention to another genre: Science Fiction. He presents Take Us To Your Chief and Other Stories.

Cost: Free with admission to CNE

For more event information, check out the TIFA website: https://festivalofauthors.ca/events/drew-hayden-taylor-at-the-cne