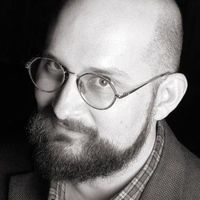 Toronto's dark side takes centre stage in A.G. Pasquella's Jack Palace series. Season of Smoke (Dundurn Press), the newest instalment in the series, sees Jack backed into a terrible corner when his past comes calling. He's pressured by the mob to kill one of his closest friends, leaving him stuck between carrying out an impossible order or putting a bounty on his own head.

Pasquella's smart, tense stories of Palace, an ex-con gone straight, are expertly crafted, compulsive page-turners and Season of Smoke is a great addition to the series. We're excited to welcome A.G. to Open Book today to talk about this newest novel as part of our Long Story novelist interview series. He tells us about an obscure library gem that taught him the art of lock picking, writing a science fiction novel with his daughter, and the thoughtful dedication in Season of Smoke that gives the gritty novel a sweet twist.

Beginnings are so important.  I like to start writing a book as soon as I can see the opening scene and the final scene. For the opening scene of Season of Smoke, I saw my main character Jack sitting on a beach next to a dead body. Then I worked on the first sentence for a bit, making sure the words evoked the image. I came up with this: “I sat on the beach next to the corpse and watched the waves roll in.” As soon as I had that, I was ready to write the rest.

I was born and raised in Dallas, Texas but I’ve lived in Toronto for the past 25 years. There’s a great tradition in crime fiction of writers really bringing a city alive. Think Dennis Lehane with Boston or James Ellroy with L.A. or Tana French with Dublin. I wanted to do that—or at least try to do that—with Toronto. Toronto in general is a very safe city (In 2019 The Economist called it “the safest city in North America”) but like any city it has a seamy side. If I’ve done my job right, Season of Smoke will let you explore that seamy side without ever leaving the comfort of your couch.

Oh man, that’s tricky. I do get attached to my characters but people in crime novels can get bumped off at any time. I really like my main character (Jack Palace) but I really like his best friend Eddie Yao, too. A few years back a friend of mine bounced up to me at a book launch and shouted, “If you kill Eddie, I’ll kill you!” Really, how can you choose? It’s like picking favourites between your children. It can’t be done.

I was in my local library and I randomly stumbled across A Burglar’s Guide To The City by Geoff Manaugh. It’s a fascinating book dealing with the intersection of architecture and crime. I learned a lot about lock picking that I ended up using for Season of Smoke’s heist scene. My 10-year old niece got a lock picking kit this past Christmas (from her dad, not from me). Maybe she and I should team up and use our newfound powers for the forces of good!

I’m writing a science fiction book right now with my 9-year old daughter. As soon as we finished the very first chapter, she said, ‘now let’s bake a cake!’ So we did. I didn’t celebrate like that when I finished Season of Smoke, but maybe I should have. Next time!

My wife Emma. She’s always supported my writing and it wouldn’t have been possible to write this book—or the first two in the series—without her. Writing is such a solitary activity, but getting a book out into the world takes a village. Agents, editors, proofreaders, designers, sales reps, publicists, publishers, booksellers, interviewers (Hi Open Book!), reviewers and of course the readers— I am grateful to each and every one of them.

A.G. Pasquella is the author of two other books in the Jack Palace series, Yard Dog and Carve the Heart. When he’s not writing, he makes music with the bands Miracle Beard and LaserGnu. Born in Dallas, Texas, he now lives in Toronto, Ontario.

It looks like ex-con Jack Palace’s troubles will never end when he is pressured by the mob to kill one of his best friends.

Jack Palace is trying to go legit with his own security company — but his old life keeps trying to pull him back in. A mobster named Sammy DiAngelo wants revenge for a killing that happened in Jack’s past. DiAngelo blames Jack’s friend Grover for the murder and gives Jack an ultimatum: kill Grover or be killed himself. Meanwhile, Grover has plans of his own. He wants to rip off the mob, and he needs Jack’s help to do it.

Jack is desperate to start a new life with Suzanne, a woman from his past … but is he desperate enough to kill?