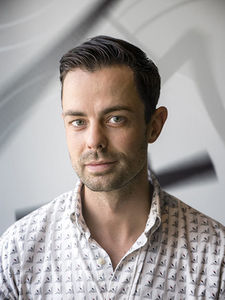 Filmmaker Adam Garnet Jones started writing and making movies in his teen years, and even in those early works, he never shied away from difficult, complex storytelling. So it's no surprise that his novel, Fire Song (Annick Press), brings that same power and fearlessness to bear on the story of Shane, a young man who has just lost his younger sister to suicide. Blindsided by the loss, Shane is left reeling, even as he tries to process his feelings for his friend, Daniel -- the only person on the rez he truly loves now that his sister, Destiny, is gone.

The deep, honest, gripping quality of Jones' writing shines on the page even in Shane's darkest moments. It earned Jones a starred Kirkus review and a rave review from School Library Journal, which praised the novel's complexity, resonance with young readers, and arresting prose, amongst other accolades.

We're thrilled to welcome Adam to Open Book today to talk about Fire Song as part of our Lucky Seven series. He tells us about the challenges he faced as a Two-Spirited person that inspired Fire Song, about the process of adapting Fire Song (which began its life as a film) into a novel, and why moments of writer's block sometimes take him literally underground.

Fire Song started its life as a screenplay, and it became my first feature-length film. In truth, I never imagined it as a novel until the opportunity came. People joke that I’m doing it backwards, which might be true. The idea for the film came because much of my own early life as a Two-Spirited person was dominated by suicidal depression and alienation. Like most people who feel that kind of darkness within them, for a long time I thought I was the only one. As I got older, I moved to Vancouver and then Toronto. I was looking for community, and in some ways I found it. As I connected with other Queer and Indigenous youth, I learned how many of us share the story of loneliness, isolation, depression, and suicide.

At the time, the media occasionally reported on suicide “clusters” in First Nations communities, but it was always with a veil of mystery surrounding it, as though the depths of that kind of pain was so deep, so inexplicable that the origins were almost magical, impossible to understand. But for me, the reasons for the epidemic of suicides are clear. Young people feel hopeless as a direct result of historical genocide, systemic poverty and oppression, substance abuse, the demonization of traditional culture (including sexuality) and its replacement with Christianity. Not to mention residential schools, the poisoning and theft of the land, and the frustrating persistence of the question “why?” coming from the mouths of non-Indigenous Canadians.

When I wrote the film, I wanted to talk about the network of systemic issues at play for young Two-Spirited people, but I also wanted to tell a story about resilience and the strength of family in the face of unimaginable pain. Fire Song premiered at the Toronto International Film Festival in 2015, and it went on to find audiences all over the world. Annick Press, contacted me because they thought that the story had strong potential as a young adult novel. They thought they might have another writer work on the adaptation, but after living with the story for so long, it was important for me to try to take on the adaptation myself. I wrote a few chapters on spec to demonstrate what my take on the adaptation would be, and Annick gave me the green light to move ahead with the rest.

When I began writing, I knew that I did not want Fire Song to be about a young guy who hates his home, so he sets off to find happiness in the big city. That story has been told over and over and, for Indigenous people - particularly Two-Spirit people - it’s a false promise. It’s a lie. And the lie is tempting for writers because, structurally speaking, it provides a clear goal and an easy resolution to the problems of these kinds of stories. But those stories tell readers, “if you don’t like where you are, just move. If you don’t move, it must not be that bad.” The problem is, this structure conforms to assimilationist narratives about Indigenous people. It places blame on Indigenous people for systemic oppression by forcing a false binary: stay and suffer or leave and (probably) suffer. In order to tell a story that felt truer to my community, I had to figure out what resolution Shane was looking for. It turned out that the story wasn’t about a young man choosing which fork to take in the road of his life; the story was about a broken family trying to heal. Once I knew that the story was about a broken family, I knew what the ending needed to be.

The screenplay started as a supernatural drama, so I think it’s fair to say it changed quite a bit from the original idea. The film took about seven years from the time I began writing to the time I finished the film. The novelization took about a year and a half more, and the story underwent a significant transformation when I shifted from one medium to another. The biggest difference is the addition of a written interiority. With screenplays, you are only supposed to write what will be seen and heard in the final film; all of the sense of a character’s interior life has to come from their actions, the subtext of the dialogue, and the actor’s performance. It was wonderful to have the freedom to put some of that interiority on the page. My editor will tell you that I got excited and went too far at first and had to pull back during the edit. 4. What do you need in order to write – in terms of space, food, rituals, writing instruments? I don’t need much. I need a laptop and some space. Sometimes I need quiet and other times I want some vocal-free music to keep me inside it. I stopped eating breakfast when I started writing more or less full-time. I found that if I begin working on an empty stomach, I can keep my mind clear until lunch. If I eat and then sit down first thing in the morning I get sluggish. I also disabled my Facebook news feed to limit that particular temptation.

I find that the best thing to do when I’m feeling discouraged is to go back and re-read what I’ve been writing and focus on editing. The editing process forces me to remember what it is that I actually wanted to say, and reminds me that it isn’t all garbage. It also feels good to cut out the bits that are garbage and leave the rest. I sometimes write in the basement of the gym, away from cell phone and internet signals. When I hit a block, I can hop into the shower or the sauna to clear my mind. Sometimes I wonder why the gym isn’t full of frustrated writers on their laptops.

A great book is many things, but perhaps most importantly, it’s one that comes along at just the right time in your life. It has to be very well written, of course, but it also has to have the spirit of something unseen, a magic that makes it seem like the book is whispering only to you. And sometimes it really is just for you. We’ve all passed on books we adore to friends or family who shrug their shoulders when asked whether or not they liked it. I’m too often disappointed by that response, as though it’s an indication of how well that person does or doesn’t understand me. The Lesser Blessed is a book that caught me off guard. It shouted at me from its opening lines and made me love it almost beyond reason. I remember throwing it across the room at one point because I was so electrified by some bit of language. The Grapes of Wrath knocked me over when I was eleven and kept knocking me over when I read it again and again through my teens. The Color Purple has been important to me. When so much good writing has anger and cynicism at its core, reading Alice Walker is a reminder that, although more rare and likely more difficult, great writing can spring forth from love and generosity.

Right now, I am developing a TV series that deals with the people involved on different sides of the Indigenous foster care system. I’m also developing a film about the horror of growing into a man when the all the men in your life are monsters. I have a new novel in mind, about how my family’s community was forcibly enfranchised in the 50’s, but it’s difficult to know where to begin. Isn’t it always?

Adam Garnet Jones is a Cree/Métis filmmaker and writer who grew up in Edmonton and the B.C. interior. He experienced an abusive childhood and began making films as a teenager in part to work through that pain. Much of Adam’s work deals with stories focused around sexuality, abuse, suicide, depression, and Indigenous cultural identity. Soon after Adam began making films, he started to help other youth share their own stories. It was through this sharing that he learned just how frequent the experiences of isolation, hopelessness, and despair are for LGBT and Two-Spirited people. The story for Fire Song was inspired by Adam’s own experiences as a teenager, by the experiences of the brave, resilient LGBT and Two-Spirited young people he has come to know, and by those who have been lost. Adam lives in Toronto.

How can Shane reconcile his feelings for David with his desire for a better life?

Shane is still reeling from the suicide of his kid sister, Destiny. How could he have missed the fact that she was so sad? He tries to share his grief with his girlfriend, Tara, but she’s too concerned with her own needs to offer him much comfort. What he really wants is to be able to turn to the one person on the rez whom he loves—his friend, David.

Things go from bad to worse as Shane’s dream of going to university is shattered and his grieving mother withdraws from the world. Worst of all, he and David have to hide their relationship from everyone. Shane feels that his only chance of a better life is moving to Toronto, but David refuses to join him. When yet another tragedy strikes, the two boys have to make difficult choices about their future together.

With deep insight into the life of Indigenous people on the reserve, this book masterfully portrays how a community looks to the past for guidance and comfort while fearing a future of poverty and shame. Shane’s rocky road to finding himself takes many twists and turns, but while his path doesn’t always offer easy answers, it does leave the reader optimistic about his fate.