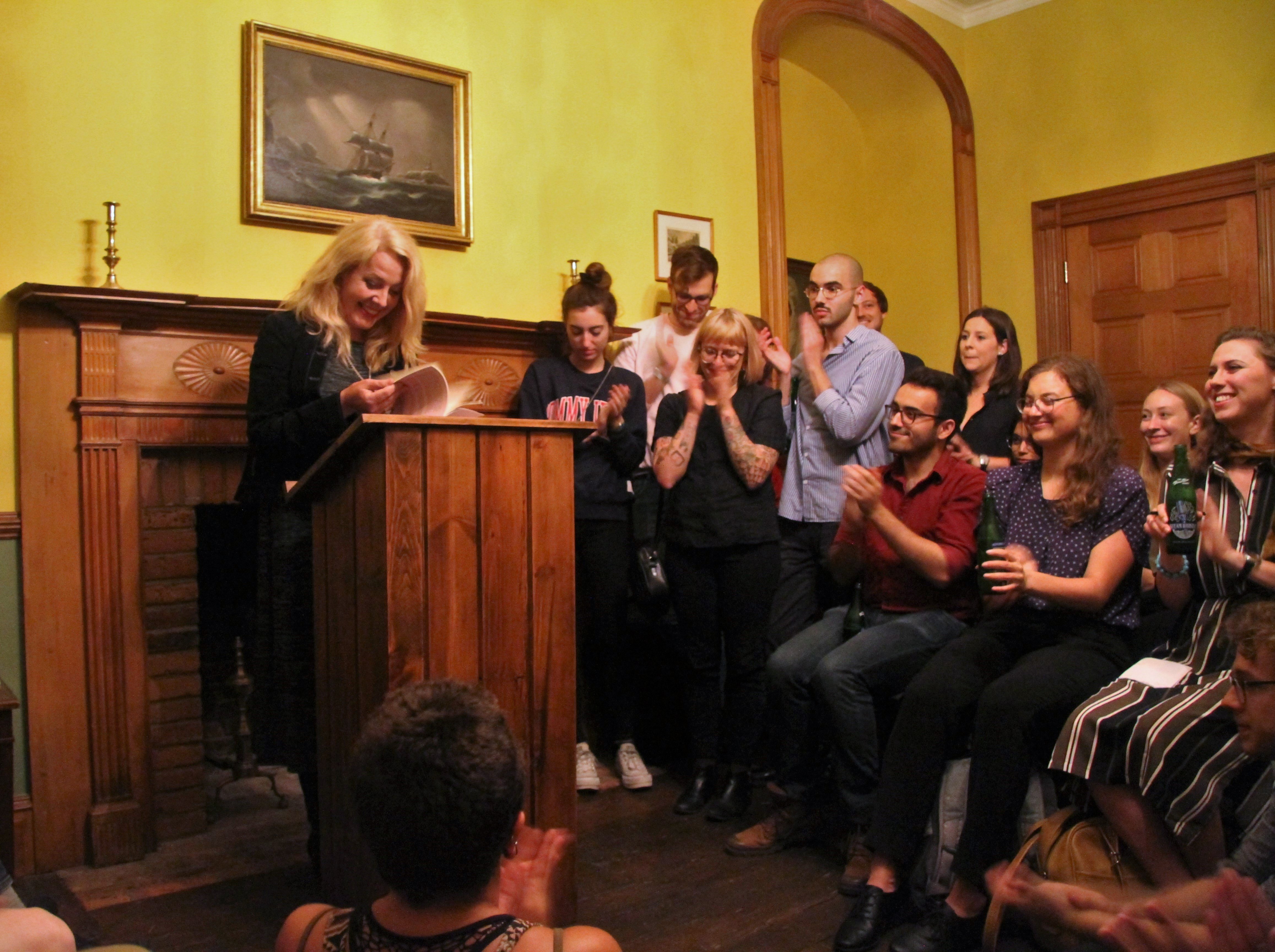 On the fourth Monday of each month, literary types gather at the very nifty Campbell House Museum on Queen Street West for an evening of readings curated and hosted by writer Daniel Kincade Renton.

The series was created in 2012 by poet, musician and translator Jessica Moore, who wanted to create a space in which a diversity of voices—from emerging to established—could come together to share new work. After Moore relocated to Montreal, she shifted the bulk of responsibility to Renton who recruited Vincent Colistro for administrative support and Alexandra Prochshenko as media specialist.

I recently attended a reading, and was blown away by the crowd that had assembled. Sure, it was a terrific line-up: Kateri Lanthier, Aaron Tucker and Zak Jones (with food on offer and drinks at five bucks a pop), but I expected the typical smattering of bookworms who would actually leave their homes on a Monday night to hear poetry. I did not anticipate a nerd mob that would fill every seat, spread out across the floor, and spill into the standing-room-only entrance hall. The staid Campbell mansion was buzzing with energy.

I spoke with Daniel Renton about the series and his role in it. 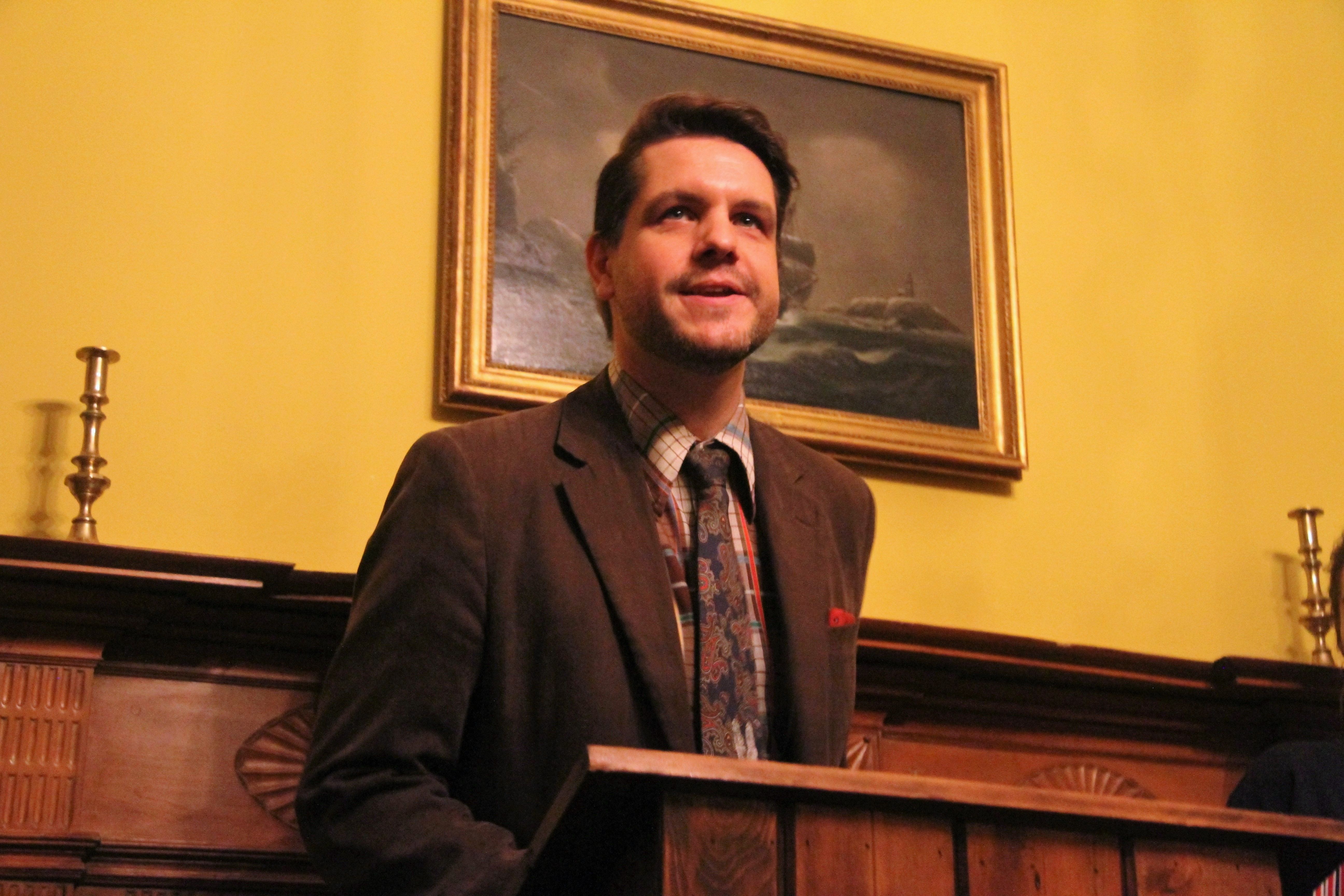 The reading I attended was completely packed. Is it usually that popular?

It’s funny you should begin by asking if we are popular, since the etymological Latin root of that word, popularis, actually meant “common”; so yes, we are usually popular at least by title – but if we called it the people’s popular reading series, we’d sound a bit like a radical political party. Perhaps in these topsy-turvy times that wouldn’t be so bad?

September’s reading was heavily peopled; could it have even been overpopulated? Possibly, but the air of anxiety lapsed as soon as the poetry began. Poetry can be wonderful for that. Leonard Cohen’s performance famously calmed a rioting crowd of 500,000 at the 1970 Isle of Wight festival, despite a faulty sound system. We enjoy a kind of improvised social experiment at every event or else it doesn’t really deserve to be called an event. Zak Jones talked to me that night about his ambitions to make every literary reading more spectacular and I know he rallied to bring out the numbers – many of our regulars were there as well. It was the closest that any of these readings has come to that mostly non-fictional scene in Kerouac’s The Dharma Bums, where Ginsberg debuted Howl to an ecstatic audience fueled by cheap wine. I wonder what Dr. Campbell would have thought about writing students sitting on his parlour floor? The room seemed to fill with joy. 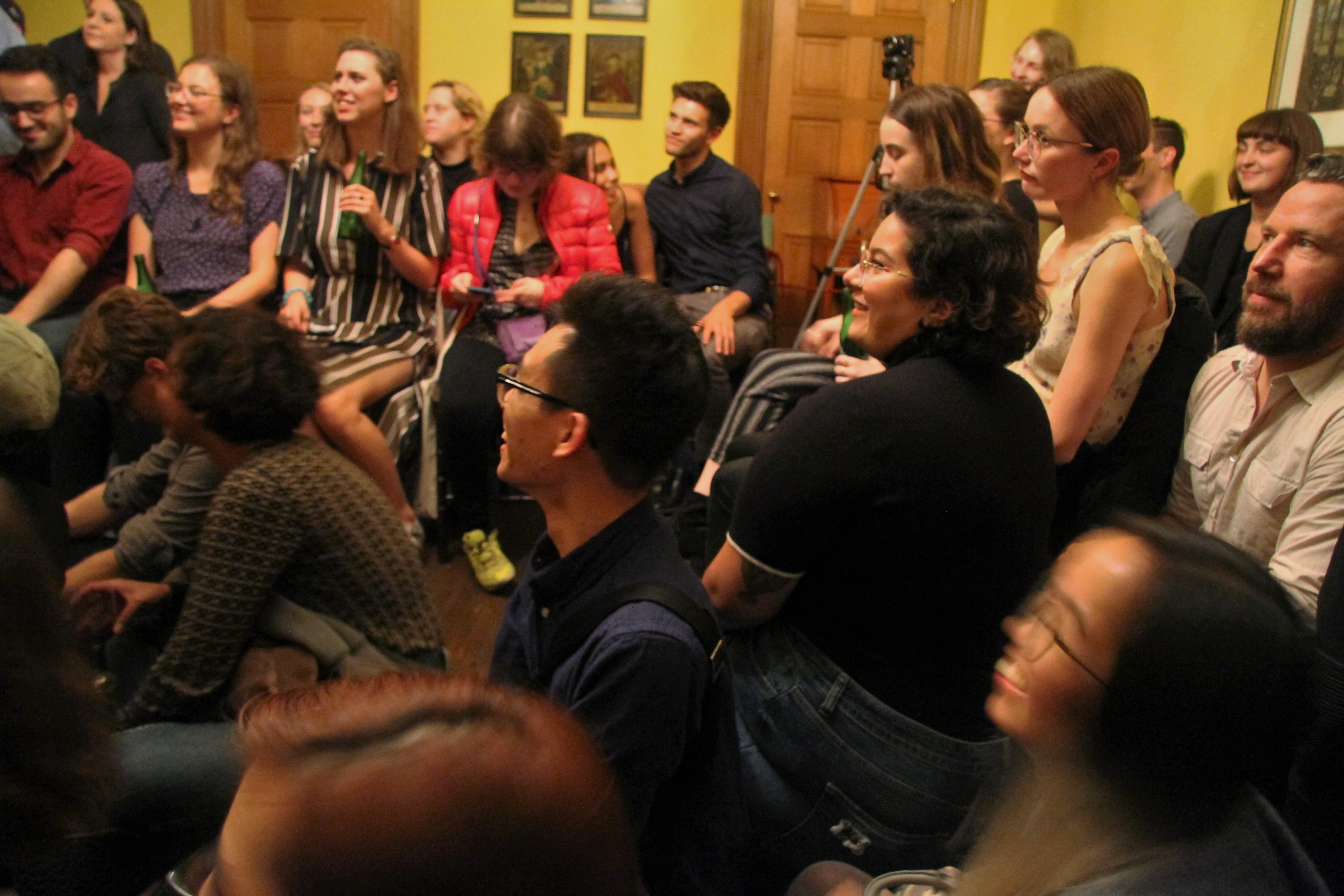 Why is it called Common Readings?

Our first venue was a Toronto coffee bar called The Common. Oddly, they lost interest right around the time when we won runner-up for best reading series in Now Magazine. When I took over as curator, we moved to The Bell Jar Café but preserved the brand, which seemed apt given our ambitions to create a welcome-to-all atmosphere. This agenda continues to provide a rationale for our mandate to match emerging with established writers, to create ties within the literary community that might not otherwise happen, and to preserve a warm and fun communal space for a diversity of writers. 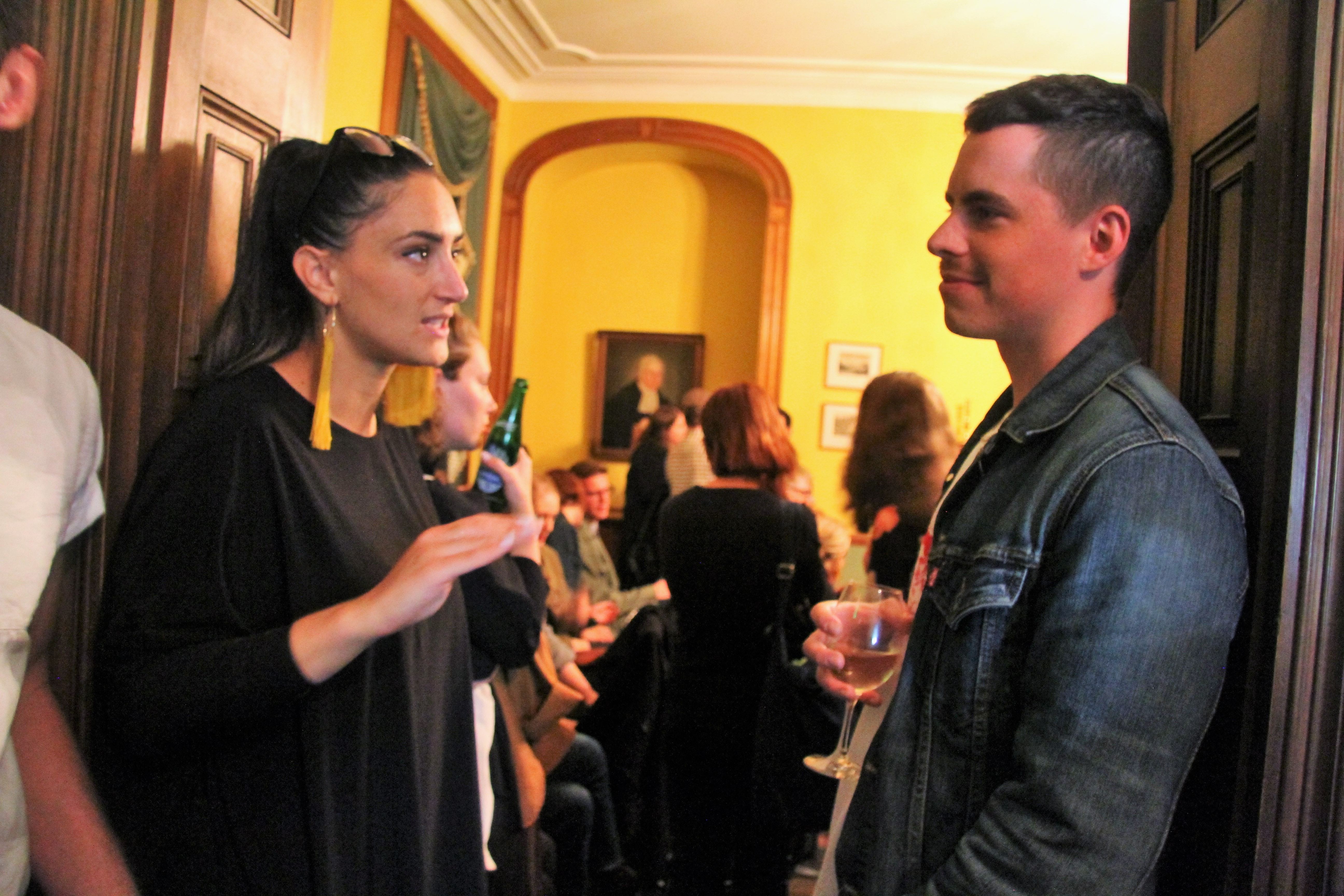 It was nice to attend a reading in a quiet space, free of the usual distractions. How did you end up in the Campbell House Museum?

The venue is gorgeous and uniquely historic. I’ve been asked this question with slight bewilderment many times since moving, but the truth is that I simply inquired. I wrote a detailed letter to then-strangers who turned out to be very kind people and accommodating curators. They agreed to give us a trial run to make sure it could work. And it did – with incredible support from the literary scene. This willingness to ask despite the odds seems to me to be the most important skill involved in curating an arts event. It also helps if you enjoy attention and don’t mind riding the coattails of talented people!

The Campbell House museum hosts a wide assortment of superb arts installations and performances. I lucked out by asking at a time when curators, Liz Driver and Antonia Krajina, were interested in adding more literature to their programming. It seems to have been mutually beneficial because so many of our readers and audience members, say to me (without a shred of hyperbole), “I’ve walked by here one hundred billion times, always dreaming I could go inside for a cool historical tour but didn’t realize I could!” Part of the role of our residency is to expose a larger audience to the museum, so I would be remiss not to direct your readers to their website, which lists all of their events and offerings: http://www.campbellhousemuseum.ca/. 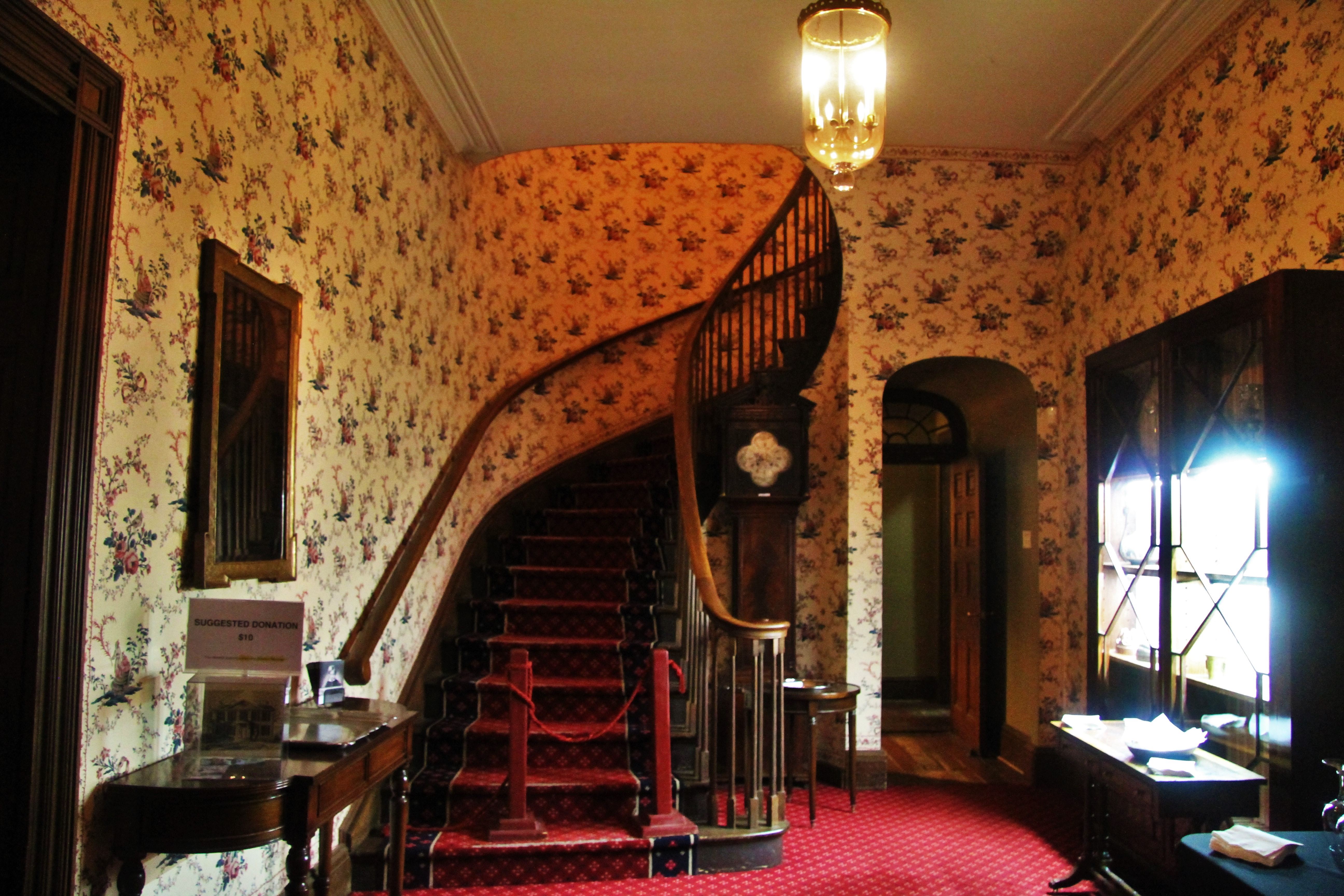 What are you looking for when you’re programming readers?

Excellent literature and performances. When I started booking, my greatest fear was that I’d run out of people who could fit that bill. What I’ve come to realize is that there’s far from any shortage of talented authors in Toronto (or travelling through).

I’m also consciously doing my best to include a wider diversity of styles, backgrounds, cultures and identities. I try to attend as many events as possible to keep privy of new voices, but I also regularly appeal to the help of a variety of writers I know and trust, to push our offerings beyond my own social bubble and personal tastes and happenstance knowledge – which any writer worth their salt should constantly be striving to do. And I’ll add that none of these ambitions have ever sacrificed the quality of the work.

here were three poets on the bill the night I attended. Is Common primarily focused on poetry?

Not at all. In fact, while Aaron Tucker read some poetry, you’ll recall that he was also promoting his new novel, Y: Oppenheimer, The Horseman of Los Alamos. Our first reading of 2018 consisted solely of three prose writers: Kevin Hardcastle, Amy Jones, and Cherie Dimaline – and, thanks to Alexandra, you can view videos of these full performances, along with most of our readings of 2018 at www.commonreadings.com.  Many of our authors migrate fluidly between genres and are all encouraged to read whatever they choose. Upcoming prose writers this fall include: Daniel Perry, Catriona Wright, Chris Gilmore, and Alex Boyd.

I’m interested in accommodating any literary genre that elicits a compelling public performance. In the past, we’ve hosted literary criticism, memoir, creative non-fiction, even the occasional musician.

Actually, if your readers are interested in prose readings, they really ought to check out a wonderful new (perhaps Toronto’s first?) all-prose reading series called Vacant Nobodies, which is expertly curated by Sophie McCreesh and Fawn Parker! They’re on Facebook: https://www.facebook.com/vacantnobodies/ 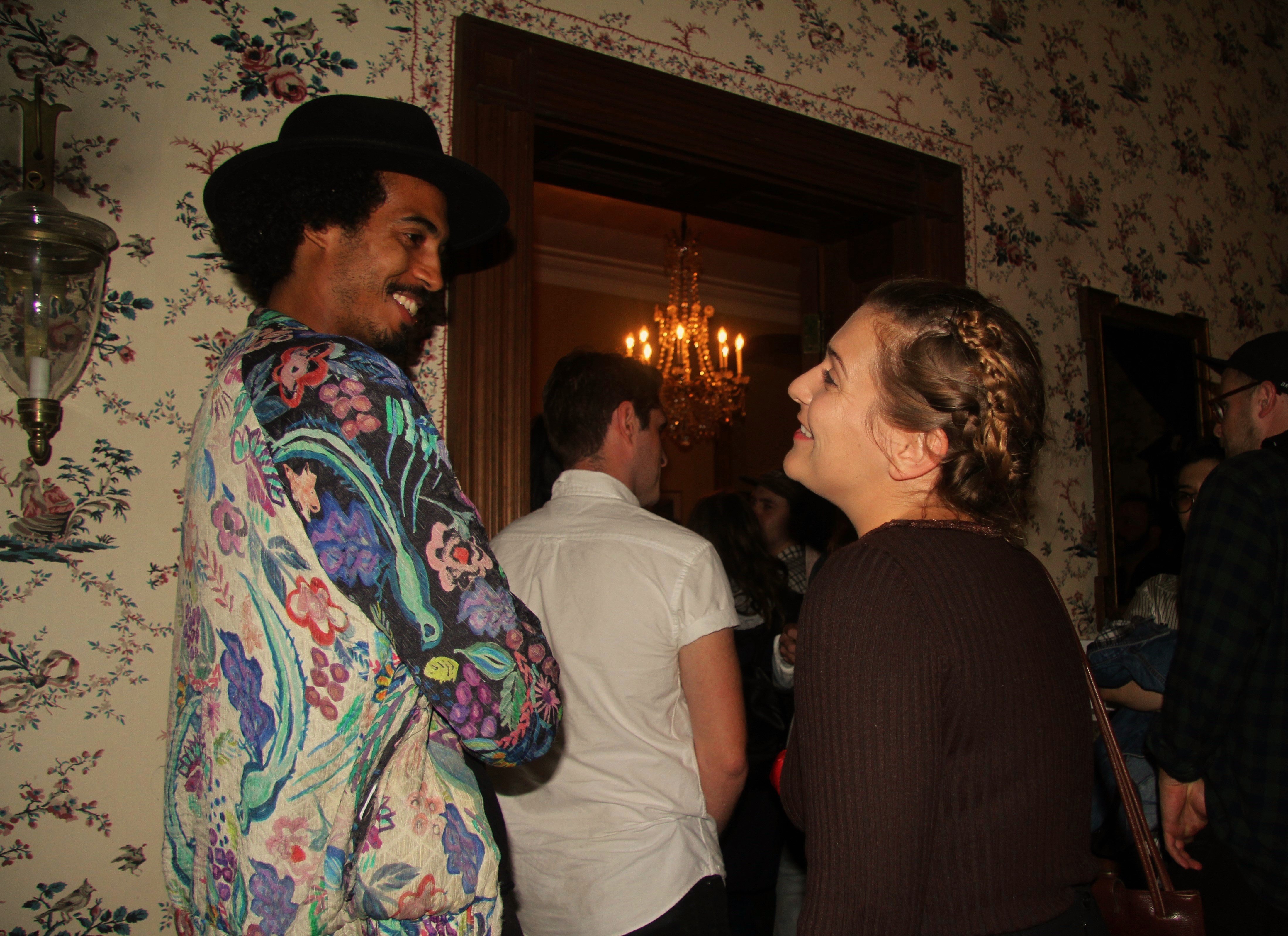 You took over as host and curator in 2015. Aside from locations, how has the series changed over the years?

The format hasn’t changed: three readers, approximately ten minutes each with breaks between each reader. We’ve been doing that since I started hosting. I stole the format directly from Jacob Mooney, when he hosted Pivot Readings at The Press Club, a venue which is now defunct – but, happily, Michelle Brown and Canisa Lubrin are doing an amazing job at keeping that series thriving at The Tranzac! (Check out: https://pivotreadings.ca/).

I personally enjoy this format because it allows for much mingling time, where the feeling of the common—what the ancient Greeks called the agora—really shines after a polishing of literary performance.

I believe the shorter sets are also more accommodating to new audience members, just dipping their toes in the contemporary literary scene. My hope is to develop a few regular swimmers this way. 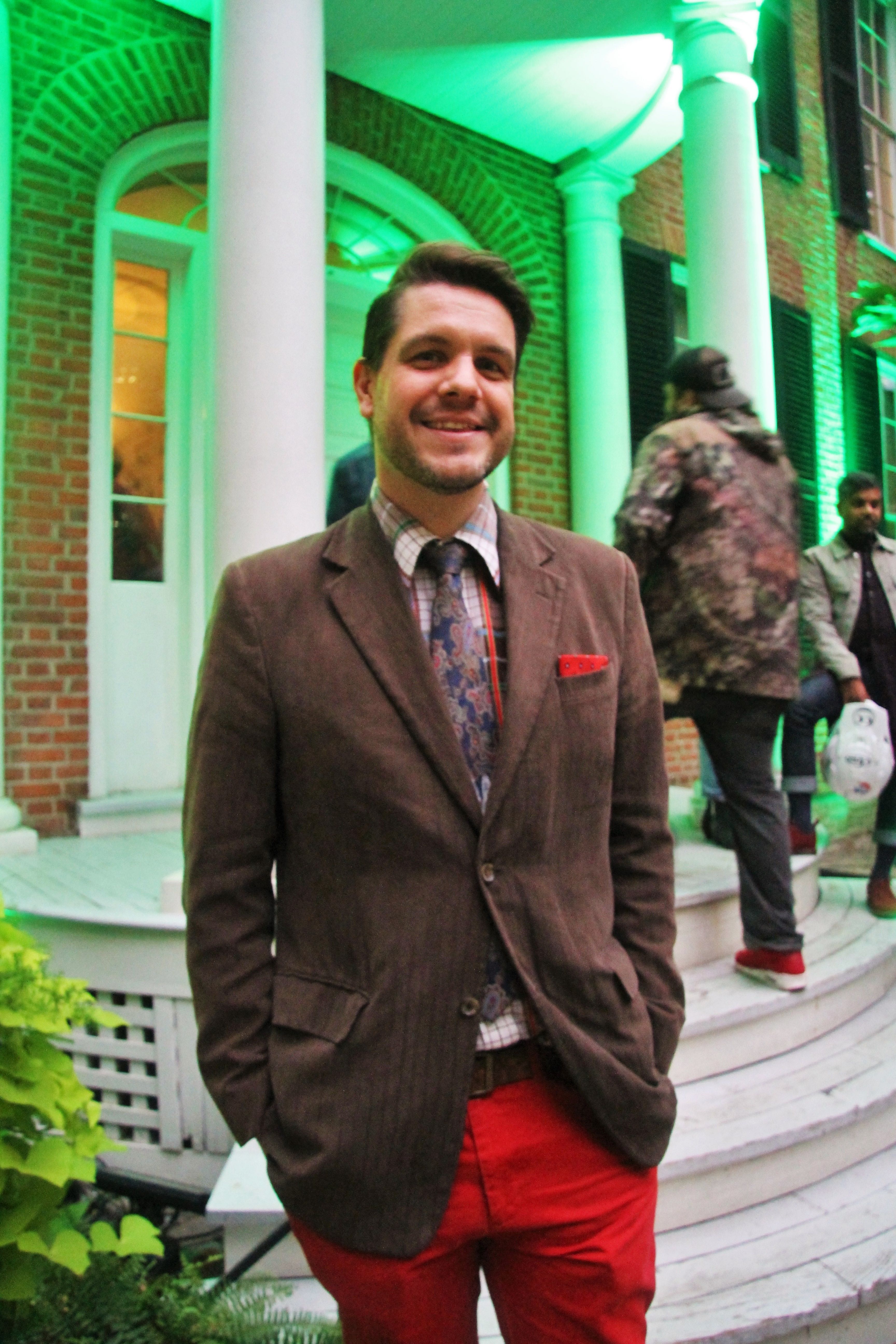 There was a real feeling of conviviality in the room (with talk of carrying on the evening at a local bar). Is that something you’ve tried to cultivate, or did it just happen organically over the years?

I’m so pleased to hear you had this impression. When I talk of the ancient agora and the importance of mingling time, I’m not just being facetious or pedantic – I mean it.

Before I moved to Toronto, finding a community of writers was rare and, while that’s readily available here to those who seek it, we shouldn’t take for granted that this is not the case across Canada. I strive to develop the kind of atmosphere that I once could only experience a few times a year, at places like the Banff Centre and UNB’s Poetry Weekend festival. When I was dipping my own toes in the lit scene, I felt unreservedly welcomed and supported by established writers like Ken Babstock, Karen Solie, Jan Zwicky, John Barton, and members of the Sweetie Babies Club: Joshua Trotter, Leigh Kotsilidis, Gabe Foreman and Linda Besner – all of whom really had nothing tangible business-wise to gain from this kindness. But I’ve also witnessed the opposite of this, where writers seem only interested in interactions that capitalize on a prestige economy – which always feels so shallow and disheartening. Ideally, I hope to create a social forum that’s more about sharing and supporting those interested in the arts in any capacity rather than about judging or schmoozing. At a period in time where the arts feel very much devalued economically, yet are finding an exponential interest from people of every kind, I believe this kind of strong positive support to be absolutely essential to our ability to continue producing valuable works of art and to hold on to those things that make us all feel wholesome and human. That said, I’m open to the future possibility of fine literature crafted by passionate non-humans as well. 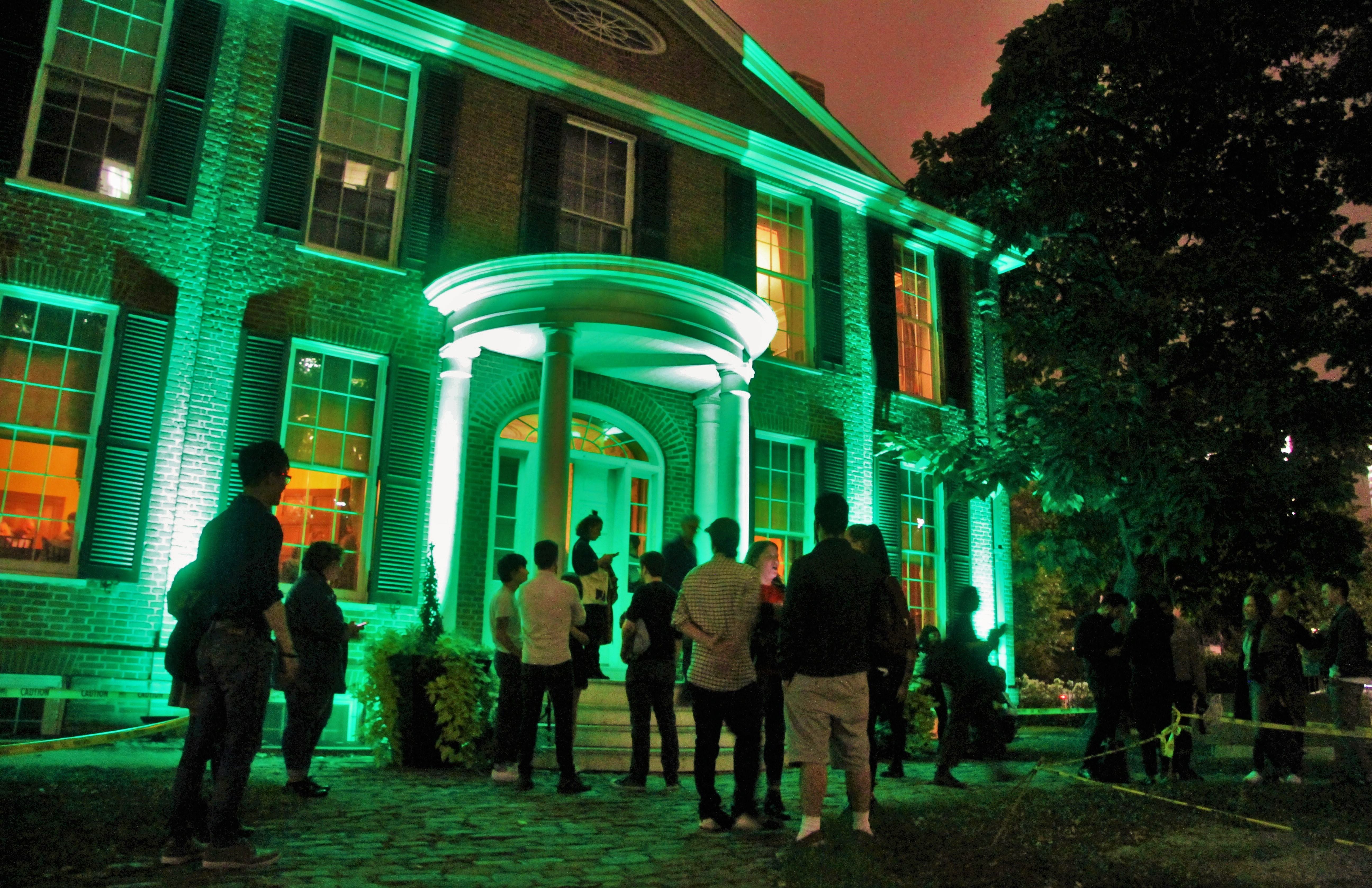 What’s ahead for Common Readings?

In an immediate sense, more and more excellent events on the fourth Monday of every month: our schedule is currently posted at www.commonreadings.com up until December 2018 and will soon be updated through to April 2019. I’ve also already booked at least some readers as far ahead as August 2019.

If we continue to enjoy as generous an audience as attended last Monday, then there’s a chance we can experiment with holding readings in the enormous and gorgeous Campbell House ballroom, upstairs – but so much depends on availability and attendance.