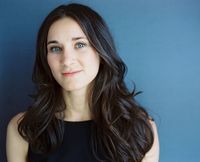 Over the past 15 years, the name Hannah Moscovitch has become synonymous the best, brightest, and boldest of young Canadian theatre. Her work has been produced around the world, with prizes adding up at home and abroad. Known for the emotional nuance, deft treatment of difficult subjects, and humour that shines in her writing, she has become one of the most popular, successful, and critically acclaimed playwrights in the country.

We're excited to welcome her to Open Book today to celebrate the publication of Bunny (Playwrights Canada Press), which follows Sorrel, a studious 17-year old who finds herself suddenly visible to her peers after hitting (late) puberty. She begins to discover the joy and pain of sexuality and a social life, but none of it makes sense until she is befriended by Maggie in college. When Maggie is diagnosed with cancer when the women are older, Sorrel finds herself again at a major crossroads, this time guiding the person who previously been her guide.

Today Moscovitch shares some of her own crossroads with us, in our Going Pro(s and Cons) interview, where we ask writers to tell us about the behind the scenes experiences of writing and publishing.

She tells us about how a two-minute therapy session figured into her writing life, why weird is wonderful when it comes to the writers she admires, and what she really thinks about MFA programs.

My first full-length professionally produced play, called East of Berlin, sold out its six-week run. I was told over and over again to enjoy it because successes like that were rare. I tried to enjoy it by getting drunk a lot.

I’d worked hard on a play. When it premiered, the first review that came out was very bad. I was so upset I went to the hospital. They sat me in the mental illness wing to wait for a turn to speak with the psychiatrist. I sat there for five hours beside people who were seriously mentally ill. When it was finally my turn to talk to the psychiatrist, he asked me why I was there. I said I got a bad review. He looked at me for a long moment, and then he asked me if I wanted to go home. I said yes. That was the whole conversation. Two minutes later, I walked out the doors. The play went on to win numerous awards and accolades.

There are a series of people I admire all of whom have similar qualities: Rachel Cusk, Sheila Heti, and Sarah Kane. I like those writers who, because they are weird, give me permission to be as weird as I like.

There are a number of MFA playwriting programs in the States, and a couple in Canada. The American ones tend to funnel playwrights straight into HBO writing rooms so I envy their graduates that powerful connection. I’m not sure if they have value beyond the industry connections you get out of them. I have no idea if a writing program can make you a better writer or not. I don’t think they’re necessary for playwrights – I didn’t get one and I’m a professional writer. That’s a good thing because I think I would have made a poor MFA student. I had a terrible time in middle and high school and I don’t trust teachers.

I’ve found it empowering to receive them, at times, but mostly I see them as a fixed part of the industries I’m in. Like a variety of other mechanisms – reviews, subscriptions – I accept awards as the given circumstances of how theatre is promoted and marketed, even if sometimes I find them painful on a personal level.

I also accept, as part of the system, that awards juries will be biased – consciously or unconsciously - against my work because I’m a woman.

Hannah Moscovitch is an acclaimed playwright, librettist and TV writer. Her work for the stage includes East of Berlin, This is War, Little One, The Russian Play, Infinity, Bunny, What a Young Wife Ought to Know, and her opera with Lembit Beecher I have no stories to tell you. She’s been widely produced in Canada, the United Stated, Britain, Europe, Australia and Japan, and honoured with numerous awards, including multiple Dora Awards, Fringe First and Herald Angel Awards at the Edinburgh Fringe, the Trillium Book Award, and the prestigious Windham-Campbell Prize administered by Yale. She’s been a finalist for the Governor General’s Award, the Susan Smith Blackburn Prize, and twice for the Siminovitch Prize. This fall, Hannah’s opera with Lembit Beecher and Joanna Settle, Sky on Swings, premieres at Opera Philadelphia, and she debuts her first confessional work for the stage, Secret Life of a Mother, at the Theatre Centre in Toronto. Her music-theatre hybrid Old Stock: A Refugee Love Story, with Ben Caplan and Christian Barry, continues to tour internationally: upcoming stops include Toronto, London, Sydney, and Hong Kong. After touring to New York City this winter, Old Stock: A Refugee Love Story was nominated for six Drama Desk Awards.

“In one school year she kissed nineteen boys and won all the science awards.”

From one of Canada’s boldest playwrights comes an intimate look into the sexual life of a young woman as she struggles with the power of her desires.

Sorrel grew up with professor parents, where carob was dessert, reading passages of Canadian poetry aloud was entertainment, and canoeing was the only sport encouraged. No one really noticed the studious Sorrel until she turned seventeen, when late puberty suddenly transformed her into a hot dork. Boys wanted her and girls loathed her, and all at once Sorrel discovered the joys of sexuality and the pain of social rejection.

Sorrel enters college as a self-proclaimed loser with no female friends, but then she meets Maggie. Maggie’s unwavering friendship helps her shed her inhibitions and become more truly herself. The two women grow older, but when Maggie is diagnosed with cancer, Sorrel must choose between raw feeling and devotion.