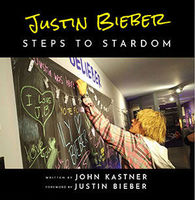 Canada is no slouch in supplying some of the most famous actors, musicians, and artists to the rest of the world. But one Canadian in recent years has achieved an almost unprecedented level of fame - the pride of Stratford, Ontario, Justin Bieber.

Justin Bieber: Steps to Stardom (Blue Moon Publishers) by John Kastner packages the Steps to Stardom exhibit, which appeared at the Stratford Perth Museum and attracted visitors from all over the world, for fans to bring home.

The book includes over 100 photos of the exhibit's items, which were provided by Bieber and his family, enriched with the stories behind them from Kastner, who is the general manager of the museum. Blue Moon Publishers also scored an original foreword written by Bieber himself.

In our discussion, Kastner tells us how, as a Stratford-based journalist, he followed Bieber's rise to fame, shares his research and writing process for the book, and reveals the misconception about the pop star he'd most like to clear up.

Tell us about your new book and how it came to be. What made you passionate about the person you're discussing?

As a life-long resident of the Stratford area and the former editor of the local newspaper I have followed Justin Bieber’s path to stardom with real interest. It really is an incredible story and that was one of the reasons we chose to create an exhibit. What we did not expect was the public’s response to the exhibit - the sheer number of people, where they came from and the emotional response. The exhibit itself, and its first year, really was book worthy.

What is unique about your subject? Why do you think people are curious about them?

We have said many times that we did not foresee the reaction to this exhibit and what we discovered was the global reach of Justin Bieber and the fans clubs and devoted fans who came here from every corner of the globe.

And the story itself is remarkable – a kid being raised by a single mother in a small town who makes a decision that he is going to be famous. That in and of itself is not that remarkable – lots of kids want to be an airline pilot or a pro hockey player or the next great magician. What makes this story unique is that it came to fruition.

The research was unique – creating and working at the Stratford Perth Museum during the period of the Justin Bieber exhibit. The book is in some ways a museum catalogue that tells the stories about the items in the exhibit. But we think the best part are the stories about the people that came to visit and a pull back the curtains type of book about them and by extension, the exhibit.

Are there any misconceptions about your subject that you were excited to clear up in your writing?

For some people, the public perception of Justin Bieber is that he can be difficult to deal with. For us the opposite was true. He was thankful, gracious, approachable – an absolute pleasure. And by extension, so was his family and his company and “his people” that are running the massive Bieber machine.

Time! No question. Unlike other authors I work full-time and finding an extended period that lines up with when you are motivated and inspired was sometimes a challenge. On the upside, as a former journalist, you never had the option of waiting until that lightning bolt of creativity struck – you wrote to deadlines and that was a real help.

Oh, and coffee if it is early in the day. If it was writing after dinner – scotch. Only the good stuff though.

What defines a great biography or profile in your opinion? Tell us about one or two that you've enjoyed as a reader or that inspired you while working on this project.

I think the best biography or profile combines an interesting subject, of course, but it provides a sense of connection. One of my favourite writers is Mitch Albom and I obviously never met Morrie but you not only identified with the author throughout that process but grew to understand Morrie and appreciated his views on life, especially as they began to dwindle. When you are done a biography or profile you should be able to say that was interesting but I know that person better now.

Justin Bieber: Steps to Stardom is a visual journey through the life of Justin Bieber and his Stratford Perth Museum exhibit. This must-have book tells the story of Justin’s rise from busking on the steps of local theatres to performing at the largest and most well-known venues in the world.

Justin Bieber: Steps to Stardom brings the museum exhibit right to you, featuring more than 100 colour photos of some of the most iconic exhibit items and Justin Bieber memorabilia, along with exclusive insights from Stratford Perth Museum general manager John Kastner. Read the never-before-revealed tales of the treasured display items, the story behind the creation of the exhibit itself, and the journeys of fans who have travelled from all over the globe to visit this homage to an icon.