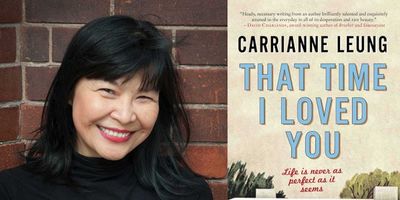 On Saturday night at the Writers' Union of Canada's OnWords Conference, the Union announced that Carrianne Leung is the winner of the $10,000 Danuta Gleed Literary Award. The award recognizes the best first collection of short fiction by a Canadian author published in the previous year in English.

Leung’s That Time I Loved You (HarperCollins Canada) has been a popular and critical hit since its publication, already racking up several honours including a nomination for 2018 Toronto Book Award and a coveted spot on the CBC Canada Reads longlist.

The jury, comprised of Heather O’Neill, Ayelet Tsabari, and Richard Van Camp said of That Time I Loved You: "Leung skillfully captures the desires and anguish that lie beneath the surface of seemingly peaceful suburban lives. Set in 1970s’ Scarborough, in a neighbourhood inhabited by immigrants, these beautifully conceived linked stories tell of love and secrets, racism and violence, and reveal the fragility of belonging and the pain of growing up. This is an exquisite and original collection, told with great empathy and glimmering with magic and hope.”

The Danuta Gleed Literary Award was created as a celebration of the life of Danuta Gleed, a writer whose short fiction won several awards before her death in December 1996. Danuta Gleed’s first collection of short fiction, One of the Chosen, was posthumously published by BuschekBooks. The award is made possible through a generous donation from John Gleed, in memory of his late wife, and is administered by The Writers’ Union of Canada.

To date, the award has presented more than $166,000 to writers and has recognized more than 100 first collections of short fiction for their excellence. The first recipient was Curtis Gillespie for The Progress of an Object in Motion. Other winners have included Dennis Bock for Olympia, Pasha Malla for The Withdrawal Method, Ian Williams for Not Anyone’s Anything, Heather O’Neill for Daydreams of Angels, Kris Bertin for Bad Things Happen, and last year’s winner Norma Dunning for Annie Muktuk and Other Stories.