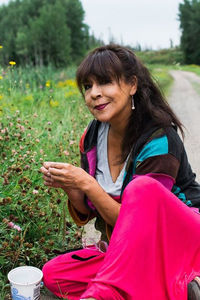 After three decades as a journalist, Carol Rose GoldenEagle turned her talents to fiction, poetry, and visual art, and she hasn't slowed down since. Since publishing her first novel, Bearskin Diary, in 2015, she has published prose and poetry, exhibited her artwork, and even added music to the mix, appearing on an award-nominated women's drum music compilation.

Her newest addition to her indefatigable output is The Narrows of Fear (Wapawikoscikanik) (Inanna Publications). The novel's raw, sharply rendered, and ultimately uplifting portrait of Indigenous women coming together in healing is both powerful and moving. It returns readers to the character of Sandy, introduced in Bearskin Diary, and adds new and compelling voices to her landscape. The Narrows of Fear has earned praise from numerous readers already, including Katherena Vermette, author of The Break, who praised it, saying, "This story is haunting in all the good ways."

We're thrilled to welcome Carol Rose to Open Book today as part of our Long Story novelist interview series. She tells us about the process of writing a story with an ensemble cast instead a singular main character, discusses her connection to the book's Northern setting, and shares the moving story of love and devotion that inspired The Narrows of Fear's dedication.

The Narrows of Fear began with a story that my cousin, John Merasty, told me. He found the reference of a Sioux invasion into Northern Cree country, back in the 1700’s. He found the story in a Hudson Bay journal. From there, I realized that the Narrows of Fear still exists today, although in peoples’ minds. I wanted to create a storyline that celebrates Indigenous women of all ages. These women have no fear and do not adhere to – rules put out by men. They are not defiant, they are inclusive. My novel has no "one" main character, instead, I introduce readers to four extraordinary women, ranging in age from 27 to 77. They build community, while supporting each other and learning about and embracing Indigenous culture.

I love the North, it is where my roots are. As a child of the 1960’s scoop up, I did not grow up with my biological family, although they are very much a part of my life today, having reconnected with them when I was in my 30’s. They are all fluent Cree speakers, berry pickers, fishers of lake trout and white fish, and hunters. In a way, The Narrows of Fear is a sequel to my first novel, Bearskin Diary. In that first novel, the reader was introduced to Sandy’s family. This newest title gives more context to Sandy’s past, as she learns more about family history and the characters therein. The storyline is set in two parts, one up North and the second, in the Cathedral Village area of Regina, as Char and Mary Ann rebuild, as well as the character of cousin Maynard coming to terms with his homosexuality.

I love the character of my Elder, Nina, who has the strength to carry on, passing down traditions and culture, even though these things were stolen from her as a result of her being forced to attend Residential School. She shares teachings with anyone. Our Elders are precious.

The Narrows of Fear is a celebration of Indigenous feminism, and a reclamation of culture.

I did do some research, into the mythology of (centaur, bush man, sasquatch, all the same spirit). He is a shape shifter and a reminder that spirit always watches and always knows. Carry your thoughts wisely and have a good heart. I also did some research into a heart attack, as Uncle Gabriel suffered. And, I have done some work at women’s shelter in the past, as an artist and storyteller. A shelter is a safe place to rebuild and I wanted to acknowledge the courage of those women who find the strength to do so.

I dedicated my novel to my dear friend, Bev Jackson. When my first child was born, his name is Jackson, it was Bev who took us in – I was working as an artist then as well and didn’t make a lot of money. Bev was the first person to hold my Jackson, she has been a part of our lives ever since. I still remember social workers showing up, once Jackson and I had moved in with Bev. I couldn’t help but think they were trying to assess my capabilities to care for my son. Maybe they even had a thought of taking him away, but Bev’s generosity ensured that we had a lovely home in which to live, food to eat, and everything else. The social workers ascertained that, where we were living was acceptable (as opposed to a small flat where I lived in Calgary prior to my son’s birth). My kids call Bev their Auntie, and she has earned that loving title in their hearts.

Carol Rose GoldenEagle is Cree and Dene with roots in Sandy Bay, northern Saskatchewan. She is an award-winning published novelist, poet, playwright, visual artist, and musician. Her works has previously been published using the surname, Daniels. She now chooses to use her traditional name. She is the author of the award-winning novel Bearskin Diary (2015) and the recently published Bone Black (2019). Her debut poetry volume, Hiraeth, was published in 2018 and was shortlisted for the 2019 Saskatchewan Book Awards. As a visual artist, her work has been exhibited in art galleries across Saskatchewan and Northern Canada. As a musician, a CD of women’s drum songs, in which Carol is featured, was recently nominated for a Prairie Music Award. Before pursuing her art on a full-time basis, Carol worked as a journalist for more than 30 years in television and radio at APTN, CTV, and CBC. She lives in Regina Beach, Saskatchewan.

The Narrows of Fear (Wapawikoscikanik)

The Narrows of Fear (Wapawikoscikanik) weaves the stories of a group of women committed to helping one another.  Despite abuse experienced by some, both in their own community and in residential schools, these women learn to celebrate their culture, its stories, its dancing, its drums, and its elders. Principal of these elders is Nina, the advisor at the women’s shelter. With the help of Sandy and Charlene, Nina uses Indigenous practices to heal the traumatized Mary Ann. This is a powerful novel—sometimes brutally violent, sometimes healing, sometimes mythical, and always deeply respectful of the Indigenous culture at its heart.