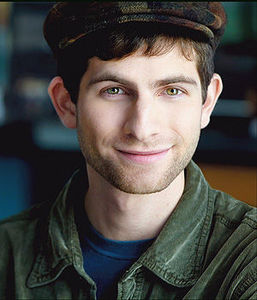 Daniel Karasik has tackled poetry and playwriting, gaining acclaim in both genres, and now he's proving that he's just as successful in fiction with the publication of Faithful and Other Stories (Guernica Editions).

The often haunting collection explores connections and isolation, loyalty and betrayal in tense, eloquent prose. Throughout, Karasik balances his stories of aching loss with wit and empathy. From characters long thought dead returning to their loved ones to those searching for meaning in unexpected places, the stories are carefully crafted and laced with longing and need. Several pieces in the collection have already racked up honours, including the prestigious CBC Short Story Prize, The Malahat Review's Jack Hodgins Founders' Award for Fiction, and the Alta Lind Cook Prize.

We welcome Daniel to Open Book today as part of our Lucky Seven interview series, where we pose seven questions about a writer's new book and writing process.

Daniel tells us about the strange and emotional process of returning to early work, the importance of shrinking, and a decision to prize helpfulness over greatness in books.

It’s a collection of stories, most of which I wrote ages ago! It’s some of my earliest work: I drafted almost all of Faithful and Other Stories between the ages of 17 and 23. First drafts, anyway. I’m 30 now and feel sort of like a different person wrote the book—a person who seems nevertheless to have known more than I do, in some ways, to have had access to depths of feeling I think I lost for a while and needed to wander and flail and fall my way back to. There was more recent work I thought about including but omitted at almost the last minute; it had a greater formal sophistication but was missing the emotional immediacy of the earlier stories. Naivety can be both a weakness and a resource, I think.

There was no preconceived unifying theme; I wrote the stories in the book at different times for different reasons. But I think preoccupations recur in it. The attempt to heal alienation through labour and love. Work as necessity and inadequate consolation. The different claims desire makes as a spiritual hunger and a bodily fact. Eros as a transformative agency, the force that draws you out of habit or complacency and demands you change your life.

I wrote the earliest story included in the book in 2004. I made the last edits this year, 2017. So 13 years? I spent more of that time not writing it than writing it, of course. How it changed over those years: mainly it shrunk. “Mine,” the piece that won the CBC Short Story Prize, is representative, a baggy short fiction that I cut into an almost ostentatiously trim one, less than 1500 words. But most of its current text was already there in its earliest versions, disordered and pillowed by excess.

I really don’t know anymore. Some quiet? But I’ve been pretty productive in certain kinds of noisy spaces too. Mostly I just need to need to write the thing I’m writing. For me the problem of content is much more important than (and sort of includes? and sort of solves?) those problems of context.

I tend just to keep going and accept that maybe what I write will be bad and I can fix it later. But I’ve also abandoned projects and eventually come back to them. Sometimes it takes an emotional event in my life to teach me how to finish a piece.

I think I’m more interested these days in helpfulness than in greatness, as literary values go. The former needn’t be a small thing—life-saving helpfulness, sometimes! Maggie Nelson’s The Argonauts had that kind of importance for me, insofar as it gave a name and an incredibly rich expression to literary, emotional, and erotic questions about which, in my own thinking, I’d gotten lazy or concluded too soon. Judith Butler’s Gender Trouble, which I met belatedly, helped me in similar ways: it gave me resources to critique certain essentialisms (not just gender essentialisms, but including those) that drive me bonkers when I find them lurking even in ostensibly progressive politics, ways of talking about human identity that seem to me just so descriptively inadequate and the opposite of emancipatory in effect. In concrete, i.e. intellectually map-able and not just abstract sentimental ways, both those books made my world bigger.

John Berger says something to the effect of: if you want to create an un-alienated art, you must first create an audience that could in principle be available to it, an audience liberated from its own alienation—and to form such a public is a task not for art but for politics. That may be a bit too tidily put (by me, not by Berger), but I do think art is a kind of epiphenomenon of a society’s material organization and dominant political ideology, and it’s become important to me that my work as an artist be one part of a larger project that includes more direct forms of political action. So I’m trying to contribute to socialist organizing, and I’ve been doing research and volunteer work around prison abolition and restorative justice in particular, stuff I became preoccupied with while living in Chicago and facilitating writing workshops for inmates at the Cook County Jail. How exactly that work feeds into my “creative” writing I’m still trying to parse, but I think it does, not least by challenging how the category of professionalized creative writing itself reflects a specific (broadly, a liberal) understanding of the relationships between work and politics and pleasure. I guess my goal is to articulate and advocate for what I consider good forms of human living-together, and I feel compelled to do that through a variety of tactics, some of which look like art. But the ones that look least art-like may also be art.

Daniel Karasik’s previous books include the poetry collection Hungry, the verse drama Little Death, and two additional volumes of plays. His writing for the stage has been produced across Canada, in the United States, and frequently in translation in Germany. He lives in Toronto.

Faithful and Other Stories

A boy finds a vocation as a weaver of bread. A Russian woman, thought dead, e-mails greetings to her adolescent sister in a Canadian suburb. An investment banker vanishes and is found fifteen years later when his daughter discovers a painting of herself in a distant gallery. With wit and ache, Daniel Karasik's Faithful and Other Stories evokes a world of seekers, characters panning for meaning in environments by turns hostile, mystifying, and enchanted. This collection brings together stories honoured with the CBC Short Story Prize, The Malahat Review's Jack Hodgins Founders' Award for Fiction, and the Alta Lind Cook Prize.