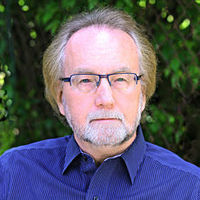 April is National Poetry Month and we are so excited to celebrate all things poetry here at Open Book. And of course part of that celebration means finding a fantastic poet to come on board as our April 2019 writer-in-residence. We are thrilled to announce that Edward Carson, author of Look Here Look Away Look Again (McGill-Queen's University Press), will be joining us for the month, sharing his perspective as an award-winning poet.

You can get to know Edward here today as we talk about the unique and eye-catching title of his collection as part of our Entitled series, where we dive deep into the meaning and function of titles.

Look Here Look Away Look Again examines how art is contained not just in itself but also in the very viewing of it by a reader, listener, or onlooker. Breaking down the dynamic of the observer and the observed, the collection is smart and witty, questioning and fascinating, and packed with gorgeous language.

In discussing his title, Edward tells us about the three disparate experiences that inspired his title choice, reflects on how a title has to work to grab a reader, and shares his own favourite title from another writer's work.

My new book’s title, Look Here Look Away Look Again, grew out of a series of chance encounters over three days with three wildly different experiences at the polar ends of art:

Everywhere and every time I looked, looked away, and looked again, the title emerged.

A title talks to readers the way a painting creates a dynamic of observer and observed.

As with cover design, a title first needs to arrest potential readers, causing them to act.

It must stop them in their tracks – catch them as they look here look away look again – and make them pick up the book or double-click the image in order to read more.

A title triggers questions – What is this about? What does this mean? – by causing in the reader an intellectual tease, intrigue, sense of mystery or curiosity.

Zen and the Art of Motorcycle Maintenance (Robert M. Pirsig). It certainly ticks all the boxes of the most important functions of a title.

Because of the way it changed how we think about thinking, it’s also the Moby-Dick of the 20th century.

An allegorical, thought-provoking shape-shifting quest that journeys into issues of values and quality, Zen is self-consciously self-reflective alongside a taxonomy or anatomy of how-to of mechanical metaphysics.

My last poetry book, KNOTS, carried with it that sense of needing to solve something, so where a single word carries the weight of many, what’s not to love?

One word is design and memory efficient, so long as it is also creative.

One-word titles can assume brand-like strength (Blink), but they also tend toward the iconic, or as figure without ground where context is missing, contributing to the reshaping of how cultures perceive and understand their environment.

I collect titles and keep an ongoing thematic list.

Length varies; they can be a single word, a short phrase or even a sentence.

There is always something about them that captures my attention – a curious mix of imagery, diction – in many cases they appear to be a comment caught in the middle of its meaning, as if pulled out of context; the content, feel or sense is the opposite of what one might think a typical title should be.

So the poem typically begins to emerge first. At some point in the poem’s development, a title from the list will be added, sometimes fitting neatly into the poem’s progress, and sometimes altering its direction.

A new book of poetry called a map composed in the size of the world.

The conceit of the map makes a metaphor of orientation – our historical, physical, philosophical, emotional senses of who we are and what surrounds us – as it is created and continuously reshaped through the GPS-like processes and medium of the brain.

Edward Carson, writer and photographer, is twice winner of the E.J. Pratt Medal in Poetry and author of KNOTS, Birds Flock Fish School, and Taking Shape, as well as his most recent collection, Look Here Look Away Look Again. He lives in Toronto.

To look is to fill our thoughts and consciousness with an experience of the other.

A work of art is never entirely present in itself but rather is always at large in the mind of the viewer. So it is that a painting needs to know the simplest question those viewing it are asking themselves. From the intimate starting point of observer and observed, Carson's seductive, exhilarating new collection turns poetry and paintings, making and representation, language and thought on their heads.