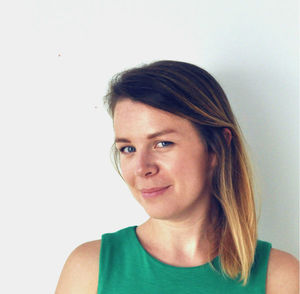 It's freezing cold outside, but your TV subscription of choice is toasty warm. Tis the season for binging, my friends! With that in mind, we put on our slippers and soft pants and spoke to the brilliant Suzannah Showler about her upcoming love letter to one of the most binge-able shows of all: The Bachelor.

Most Dramatic Ever: The Bachelor (ECW Press - available January 23!) follows the evolution of the reality show that purported to offer the biggest prize of all: true love. Showler's slim volume is as hilarious as readers would expect from her, but also insightful about the strange and enduring appeal of what became one of the most successful franchises in television history. Examining what the show's success means for modern love and our reality show-obsessed society, Showler delves into discussions of personal branding, vulnerability in the age of Tinder, and more.

We're thrilled to talk to Suzannah today on Open Book. She tells us about the surreal experience of having a reality TV star become president while writing a book about reality TV, explains the importance of a good blanket-cape to the writing process (we agree), and offers her excellent Method™ for punching through writer's block.

My new book, Most Dramatic Ever, is about The Bachelor. It’s the 9th installment in ECW’s Pop Classic Series, which are compact, brightly coloured books that argue for the meaning and importance of an artifact of popular culture.

How it came to be: I was just finishing final edits on a book of poems I’d cranked out on a bit of a crunchy deadline, and I felt like poetry and I needed to take a break. I saw a call for Pop Classics pitches, and I’d written a few essays about The Bachelor franchise in the past and conjured some grand, unified theories in the process, and I very innocently thought: oh yeah, I could probably do that. Write a few essays in a row, come out with a cute little book about The Bachelor at the end? Sounds fun. Nbd.

Um, yeah, that was very delusional. Turns out writing a whole book made of prose sentences (even if it’s a short-ish book) is super hard! Whole v. sum of parts, etc. But as often happens when something is harder than you expected it to be, it was also more rewarding.

One question I started with: why do I love this terrible show?

One question that emerged: is anything real?

Most of the book was written between September 2016 and March 2017. But the total time from pitch to proofs was a year and change, largely because we were adding and updating chapters through the editing process to account for the 2017 seasons of Bachelorette and Bachelor in Paradise. (Shout out to my editors, Crissy and Jen, who were heroes at juggling many phases of editing all at once.)

Like many things conceived before November 8, 2016, the world into which this book will emerge is very different than the one in which it was imagined. And those changes (maybe not so much to how things are as to what is perceived) really left a stamp on what I wrote. The last chapter of Most Dramatic Ever is basically all about this, so you can read a full report there. But for now let’s just say: when you start writing a book about reality TV and America and then a reality TV star becomes President while you write it, it’s kind of a whole thing.

I decided to ask my partner and secretly record him on my phone. This is a transcript:

Me: Hey Andrew? I’m doing a thing for Open Book. What would you say I need to write in terms of space, food, rituals, and writing instruments?

Me: Would you say it’s a reasonable method?

Me: Would you say that it’s useful and productive though?

I have a specific Method™ I teach when (and if) anyone gives me disciples. For proprietary reasons, I can’t disclose it here. (PS. please hire me to apply my cult-like techniques to your students.)

Many of my personal coping mechanisms involve harassing my body into making brain chemicals that mitigate despair. In no particular order:

Pour another one (coffee when day is waxing, booze when it wanes)

Talk it out with best ones

I think great books transform the way you see the world while haunting you with déjà vu. Like the shift in perspective was already inscribed on your brain. It’s a relief and an agitation—having your itch and scratching it, too. Some books are great in a perennial way, but others you might only get one play of, and after that they’re more like a talisman. Sort of like how most remembering is just remembering a memory? I’m reluctant to give examples of particular books. I’m not sure why that is? I guess that feeling is just so subjective.

I’m in the early stages of a new nonfiction project that I’m superstitious about committing words to on the public internet. For now, I’ll say my hope is to write something that could be filed under both “Adventure Story” and “Advice.” Details to follow.

Suzannah Showler is the author of the poetry collections Thing Is and Failure to Thrive. She is a 2017–18 Presidential Fellow at The Ohio State University. Her essays and cultural criticism have appeared in places like Buzzfeed, Slate, Los Angeles Review of Books, The Walrus, and Hazlitt.

Most Dramatic Ever: The Bachelor

The right reasons to fall in love with The Bachelor

When it debuted in 2002, The Bachelor raised the stakes of first-wave reality television, offering the ultimate prize: true love. Since then, thrice yearly, dozens of camera-ready young-and-eligibles have vied for affection (and roses) in front of a devoted audience of millions. In this funny, insightful examination of the world’s favorite romance-factory, Suzannah Showler explores the contradictions that are key to the franchise’s genius, longevity, and power and parses what this means for both modern love and modern America.

She argues the show is both gameshow and marriage plot — an improbable combination of competitive effort and kismet — and that it’s both relic and prophet, a time-traveler from first-gen reality TV that proved to be a harbinger of Tinder. In the modern media-savvy climate, the show cleverly highlights and resists its own artifice, allowing Bachelor Nation to see through the fakery to feel the romance. Taking on issues of sex, race, contestants-as-villains, the controversial spin-offs, and more, Most Dramatic Ever is both love letter to and deconstruction of the show that brought us real love in the reality TV era.