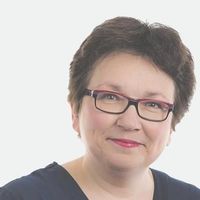 Josée Boileau's Because They Were Women: The Montreal Massacre (Second Story Press, translated by Chantal Bilodeau) takes readers back to one of Canada's darkest days to memorialize the the fourteen victims of the infamous Montreal Massacre.

While December 6 has been remembered across Canada each year since 1989, what is less frequently discussed is the chilling effect the act of terror had on Quebec's burgeoning feminist movement. Following the attack, Quebec media and experts pushed back, insisting on interpreting the massacre through a lens of personal psychology and denying any larger social involvement or motivation. In turn, feminists found themselves disheartened and even attacked for the insistence that the murderer's actions existed within a misogynist framework.

Boileau centres the massacre and the actions of one violent man exactly where they should be - inescapably connected to larger social trends and a culture of violence against women. Rejecting the "lone wolf" doctrine, she both honours the victims and survivors of the massacre while taking to task the society that allowed the growth of the entitlement, rage, and hatred that motivated the shooter.

A tough and important read, we're are glad to be able to continue our special focus on excerpts from essential texts this week, and share a section from Chantal Bilodeau's stunning translation of Boileau's book, courtesy of Second Story Press.

Excerpt from Because They Were Women: The Montreal Massacre 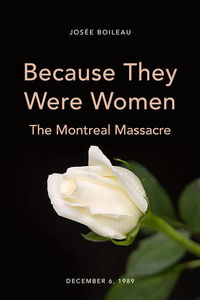 Should the massacre perpetrated by Marc Lépine be attributed to a single man, a “crazy shooter,” as he is painted in the media, or to a misogynist representative of the male violence coursing through society? Unless this man was driven to crime by feminism itself?

Opinions are split along a clear line and culminate in two publications with drastically divergent perspectives. First, Polytechnique, 6 décembre, an anthology comprising several women contributors, is published by Éditions du remue-ménage in the spring of 1990 (21). It is answered by the uncompromising and much noticed Manifeste d’un salaud (The bad guy manifesto) by journalist Roch Côté, published in the fall of 1990 (22).

A new polarization emerges: masculinists against feminists, and vice versa. In each camp, anger is deep, accusations are harsh, and arguments are elaborate.

Lépine’s act lifted a taboo. In the hours following the tragedy, men share their understanding and even their approval of him. Thirty years later, Nathalie Provost, one of the survivors in classroom C-230.4, where Lépine first opened fire killing six female students and injuring three others, vividly remembers (23).

She stood up to this young man armed with a rifle who was telling them that he hated feminists. “Come on, we’re not feminists, we didn’t take anyone’s place,” she more or less told him (24).

But when she is hospitalized for her injuries, she hears men on the radio saying that Lépine did a good thing. Stunned, she decides to meet with journalists in order to communicate something fundamental to her that she feels is her responsibility since she’s involved in the Polytechnique Students’ Association (AEP) and sits on the board of the school.

On Friday, December 8, she holds a short press conference from her hospital bed that is so unusual that the journalists applaud her afterwards (25). She says: “To all the young women in Quebec who were thinking about studying engineering, I’m asking you to consider this career with as much enthusiasm as you did before Wednesday.” Above all, she didn’t want anyone to look for a guilty party other than Marc Lépine: “There’s only one culprit and he’s dead.”

Experts, commentators, the vast majority of elected officials, and many members of the public—and not just men—plead for Lépine’s act to not be over-invested with meaning. Incidentally, Lépine is found to have had a miserable childhood within a complicated family, ruled by a violent father.

Among them, Pierre Foglia, the most popular columnist of the time and a prominent figure in Quebec journalism, makes his point in his typical frank and direct style. Relating the comments of a neighbour who thought Lépine was friendly, Foglia writes: “If you manage to make a monster out of that, it’s because you have a talent for psychology. Or feminism. Or journalism... [...] If you don’t, maybe it’s because there’s no monster. Only ordinary men and women, like you and me. Anyone can miss a step and fall into madness.” (26)

Analyzing the personality of the killer is the privileged approach—but the media doesn’t call on feminists who specialize in questions of violence against women to weigh in.

This is largely condemned by militant feminists and feminist allies, who see another way to annihilate the effect that the shooting had on women. The shooting was, in fact, “an extreme expression of daily violence.” (27)

The anthology Polytechnique, 6 décembre captures their anger and pain. A passage perfectly summarizes the spirit of the book, comprised of fifty contributions: “Initially considered public, the act was quickly reduced to a family fight that got out of control and moved into the private sphere. In doing so, a new form of violence was inflicted on thousands of women who had ‘wrongly’ felt wounded at their core.” (28)

Another comment reveals the deep fear felt by many women, yet ignored in the coverage of the event. During a “brunch reflection” about the massacre organized in January 1990 by the Fédération professionnelle des journalistes du Québec (FPJQ), Anne-Marie Dussault, then host of Le Point on Radio-Canada television, says: “The day after the Polytechnique tragedy, I met with City of Montreal female blue collar workers for a news story [...]. The meeting had been scheduled for two weeks. That morning, at least a dozen terrorized women refused to speak on camera. They felt hunted, in danger, and they were completely overwhelmed.” (29)

Historian Mélissa Blais dedicated her Master’s thesis to the Polytechnique massacre, as well as a book titled J’haïs les féministes! (I hate feminists!) published in 2009 by Éditions du remue-ménage (30). She also co-edited the collection Retour sur un attentat antiféministe, published in 2010.31 Her conclusion is unequivocal: “The use of this kind of [psychological] expertise allows journalists to bring Lépine’s act down to the level of the individual, and in doing so, to present it as if it were exceptional. Comparative analyses of different crimes committed specifically against women, and analyses looking for explanations within social relationships are put aside or drowned out by the comments of male experts (but far fewer women experts) working in the field of psychology. The significant number of articles about Lépine’s familial and psycho-emotional difficulties encourage readers to adopt a discourse that psychologizes the events of December 6, 1989.” (32)

On the flip side, some people accuse feminists of instrumentalizing the tragedy, of mixing everything, and of generalizing too much. It’s sometimes said carefully, but most of the time, it sounds like an accusation.

Le Manifeste by Roch Côté is a good example. The book denounces “Le procès de l’homme” (The trial of man), which is the title of one of the chapters. It provides fodder for discussion, even vigorous debate, but Côté expresses his point of view with hostility. He even directly attacks feminist personalities while failing to mention that these women were on Lépine’s list of women to kill. From being prey, the women become predator. It’s a complete reversal of perspective that Blais analyses in detail in her work.

At that time and long afterwards, many women will insist on correcting this perspective, like Lise Payette who, as recently as 2016, explained that after the Polytechnique massacre, “men managed to make everyone believe that [feminism] was violent. [...] We talk a lot about the Quiet Revolution, but the only quiet revolution I know is the women’s revolution. Women didn’t go into men’s schools to shoot them. Feminism is not violent. It fights for women’s rights but doesn’t want to take them away from men.” (33)

The December 1989 tragedy slows the militant movement down to a crawl. “All feminists were not assassinated, but [all of them] were profoundly hurt by the event,” says Payette in 2016, adding that it took two years for the feminist message to find its legs again.

The historical thread of Quebec’s feminist movement (34) proves her right. The years 1990 and 1991 are almost dead calm, except for the long- planned celebrations of the 50th anniversary of women’s right to vote in Quebec, new provisions for a parental leave without pay as part of the Act Respecting Labour Standards, and the nomination of a few “first women.” We are very, very far from the exuberance of the previous two decades.

Worse, a controversy that everyone thought settled resurfaces: abortion.

Following a decision from the Supreme Court in 1988, abortion is not constrained anymore, and this legal vacuum seems unacceptable to the Conservative government of Brian Mulroney. The Prime Minister sets up an internal committee to address this issue, within which—we’ll find out twenty-five years later—ministers will engage in an epic debate. The hard- liners win.

In November 1989, Bill C-43 is introduced in the House of Commons: it imposes severe restrictions on abortion, banning any termination of pregnancy unless a doctor rules that the life or the health of the mother is threatened. Despite protests and demonstrations, it is adopted on May 23, 1990 during a free vote of 140 to 131, although it would be defeated in the Senate the following year. Yet only a few months earlier, the Supreme Court had recognized that women had the right to control their own bodies.... It’s a huge step backward.

The phrase “le compteur a été remis à zero” (the counter was reset to zero) found in one of the contributions to Polytechnique, 6 décembre, doesn’t solely concern the massacre anymore but is applicable to the entire feminist movement.

Josée Boileau has been a journalist for more than thirty years, many of those for Quebec’s Le Devoir newspaper, where she became Editor in Chief. Today, she is a current affairs commentator for CBC/Radio Canada and Chatelaine, and a book columnist for Journal de Montréal. She has received a number of honours, including the Hélène-Pednault prize in recognition of her feminist activism. She lives in Montreal.

Because They Were Women: The Montreal Massacre

Fourteen young university students, murdered because they were women, are memorialized in this definitive account of a tragic day that forced a reckoning with violence against women in our culture. Each of the victims of what became known as the “Montreal Massacre” are remembered, their lives cut short on December 6, 1989 when a man entered their school and systematically shot every young woman he encountered, motivated by a misogyny who’s roots go far beyond one man and one day.