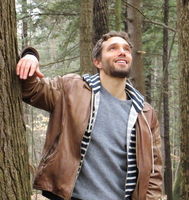 When three childhood friends are unexpectedly reunited in David Albertyn's debut novel Undercard (House of Anansi), the wild consequences are far beyond what any of them could have foreseen. Tyron Shaw is returning home to Las Vegas from over a decade as a marine, while his cop friend Keenan is living in disgrace after having shot an unarmed teen. They awkwardly reconnect when their old friend and ex-con Antoine turns up as the undercard fight (the match before a title fight) before one of the biggest prize fights sin city has seen in years.

The chaos, violence, and revelations from the past that unfold over the following 24 hours are tightly plotted and cinematic, making Albertyn an exciting new writer to watch.

We're thrilled to welcome him to Open Book today today to take our It's a Long Story interview for novelists, where he talks about the process of writing Undercard. He tells us about discovering his characters and story had lives of their own, how yoga and bad colds are part of his writing process, and why he opted not to include a dedication in Undercard.

I had the idea for Undercard two years before I started writing it. In that span I thought a lot about the characters and their relationships with one another. I also had the bare bones of certain key plot points. But what I remember most is the feeling when I finally put pen to paper. From the beginning Undercard felt different to anything I had written before. It just flowed. From the first word, it flowed. By the end of the opening chapter, I knew I had struck upon something special. And that feeling only increased throughout the writing process.

My instincts were confirmed as soon as I finished the book and started showing it to people. Everyone responded to it. From family to friends to my agent, and even to publishers. House of Anansi bought it right away. Then it was a hit in international book fairs, HarperCollins bought it in Germany and France, and Hollywood scouts started writing to my agent about it. My head was spinning, to put it mildly. In no time at all, it felt like everything had changed.

And all thanks to this book, which (it sounds funny to say) I felt so grateful to. I don’t want to go to an extreme: "I was but a conduit; the muse spoke through me; inspiration was in my pen and I merely let it out." Undercard is, of course, the result of my effort, experiences, and imagination – and the effort of my editors. But a book does have a life of its own. The characters have lives of their own. And everything going on in your life, everything going on in the world, all the input you’re given, the writing style you’ve cultivated, all of it feeds your story; and if the ingredients come together just right, it does feel like a creation of its own. That was the feeling I had at the very beginning, when I first started writing Undercard. I was embarking on an adventure. One I wasn’t in control of. And I still feel that way.

I do have a favourite amongst my characters. I’m not sure if he’ll be anyone else’s favourite (you’ll have to read the book to find out why), but he is my favourite. His name is Antoine Deco, he’s a professional boxer, and when we meet him, he’s in the midst of his final workout before the biggest fight of his life. He is three years out of prison, emerging from incarceration a far better boxer than when he went in, undefeated since his release and knocking on the door to the upper echelon of the sport.

In Antoine, I wanted to detail a character for whom everything came hard to. Sports, friendships, romantic relationships, family, career, everything. But, through incredible perseverance, and relentlessness effort, he develops in all aspects of his life, and suddenly things start coming easy to him. Through his character, I wanted to capture the process of achieving extremely difficult goals. However, whether or not his change in abilities will be enough to overcome the damage done to him, that is the question of the novel.

24 hours in Las Vegas, boxing, casinos, corrupt cops, old friends thrust back together, the desert, revenge, pulse pounding from start to finish, this is the book for you.

My routine after finishing any draft is usually to go for a really long run and then do a bunch of yoga classes. Then, almost always, I get a cold or the flu. Normally by the time I’ve recovered, it’s time to start writing again.

I actually didn’t dedicate my book to anyone, nor did I include an epigraph. I plan to have dedications and quotes at the start of future books, but for this novel, which I tried to make as visceral and exciting as I could, I wanted as few pages as possible between the cover and the opening sentence. Since the story takes place over 24 hours, I want the reader immersed right away, and for that reason I didn’t want anything, not even a dedication, to distract from the experience they’re about to enter. You open the book and you’re in it.

Born in Durban, South Africa, David Albertyn immigrated to Canada with his family when he was ten years old. Since 2005, Albertyn has been a competitive tennis player and coach. A graduate of Queen’s University and the Humber School for Writers, Albertyn lives in Toronto. Undercard is his first novel.

When Tyron Shaw returns to his hometown of Las Vegas after eleven years in the Marines, he’s surprised to discover that two of his best friends from childhood are all anyone is talking about: Antoine Deco, three years out of prison, hasn’t lost a boxing match since his release, and tonight is fighting in the undercard to the fight of the decade; and Keenan Quinn, a police officer who killed an unarmed teenager and escaped punishment from the courts, is the subject of a protest tomorrow morning.

Tyron has trouble reconciling either story with his memory of these men, and the situation escalates when he runs into the love of his life, Naomi Wilks, a retired WNBA player, basketball coach, and estranged wife of Keenan. As Tyron reconnects with his old community, he will learn over the next twenty-four hours that much has changed since he left Las Vegas . . . and there is much more that he never understood.

The Reef, an aquarium-themed casino and the hottest resort on the Strip, is the backdrop for this bullet-paced narrative, where loyalty to one’s friends, one’s family, and one’s community are ever at odds, and every choice has deadly repercussions.