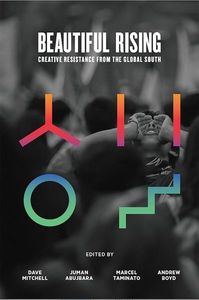 When the cards are stacked against them, activists are left with only the most creative and courageous options to make their voices heard as they protest violence, hatred, and discrimination.

In Beautiful Rising: Creative Resistance from the Global South, edited by Juman Abujbara, Andrew Boyd, Dave Mitchell, and Marcel Taminato (Between the Lines Books), we see numerous incredible examples of just that kind of activism. From the Ugandan organizers who smuggled two yellow-painted pigs into parliament to protest corruption to the Burmese students’ unbelievable 360-mile long march against undemocratic and overly centralized education reforms, Beautiful Rising details the most daring, forward thinking activists who subvert oppression with grit, imagination, and even humour despite terrifying and often violent attempts to silence them.

The scale and depth of this project (which also manifested in the group's Beautiful Trouble portal, an online toolbox for activists in the Global South) is as staggering as it is impressive.

We had the opportunity to speak with all four editors about the book and its genesis. They told us about the question they had to ask themselves as they began the book and launched Beautiful Trouble, the jam sessions they participated in to gain on the ground knowledge from the activists featured, and what is next for their self-professed "motley" (we'd add incredibly inspiring!) crew.

For the past few years we’ve been investigating the tools and tactics used by creative activists operating under authoritarian regimes across the Global South. This was a fascinating collaboration with social movements on the ground in many countries from Zimbabwe to Myanmar to Mexico, facilitated by a partnership with the international campaigning and training organization ActionAid. The complete results of this project are available online at beautifulrising.org, and a curated selection of the most promising stories and approaches is now available in book form as the beautifully designed Beautiful Rising: Creative Resistance from the Global South (Between the Lines 2018).

With the election of Trump, the Brexit vote, and the broad slide towards authoritarianism and resurgent white supremacy, that focus on creative resistance to authoritarian regimes is sadly much more relevant and timely for activists in the Global North as well.

We started this book with the same question that launched our entire Beautiful Trouble project: How can we contribute to making activism more creative and more effective? This time, though, we were able to reach out to a much more globally diverse group of activists for answers, starting with face-to-face workshops in Myanmar (Burma), Bangladesh, Uganda, Zimbabwe, Jordan and Mexico, and expanding from there based on responses to our call for contributions.

The stories contributors shared include the Ugandan organizers who protested corruption by releasing yellow-painted pigs through the halls of Parliament, to a long march by Burmese students against undemocratic and overly centralized education reforms, to the campaign where thousands of Lebanese citizens honked (with car horns, air horns and the like) at politicians who had clung to power long after their term had expired, and many, many others.

From that initial question and those initial findings, many other questions followed.

One of these was how grassroots movements can maintain their autonomy in the face of “the NGO-ization of resistance” — the ways in which the rapid proliferation of non-governmental organizations under neoliberalism has inhibited popular and democratic struggles. This quickly revealed itself as a problem faced by activists working in vastly different contexts across Asia, Africa, and Latin America. By naming it, changemakers were able to identify a key pattern across their various struggles and thus better challenge it. To counter this destructive force, activists identified a need for solidarity not aid — both south-south solidarity, and a rebalancing of the power dynamics of north-south solidarity.

We launched the project and put out the first call for submissions in 2014; conducted jam sessions across the Global South in 2015 and 2016 to gather material; officially launched the online toolbox (in English, Spanish and Arabic) in early 2017, and published the book in the US and UK later that same year. The project is ongoing, with new content and translations added all the time — the Portuguese version of the online toolbox is due out any day now!

Throughout our workshops, participants repeatedly called for better tools to facilitate their own strategic thinking. To address this need, we created a special section of the toolbox called Methodologies, and stocked it with strategic frameworks and hands-on exercises that groups can use to more systematically assess their situation and plan their campaigns.

Much like the books we produce, Beautiful Trouble is basically a modular organization — a motley crew of activists, trainers and editors scattered around the globe who are organizing horizontally to spin out projects that align with our goal of making social movements more creative and effective. These projects include a training program that helps groups and individuals apply the lessons from our toolkits to their daily struggles, a resistance hotline to help support the surge of new progressive activists planning their first actions and campaigns, a game that groups can use for real-world strategic planning and action design, and, soon, an integrated online toolkit that combines the wisdom of both the Beautiful Trouble and Beautiful Rising toolkits into a single go-to resource.

Five years ago we never would have guessed that the network behind our first toolkit would have grown so precipitously. Who knows what trouble we’ll get into next!

Andrew Boyd is co-founder of the Beautiful Trouble project, author of several books, and a long-time veteran of creative campaigns for social change.

Dave Mitchell is a writer, editor, organizer, and troublemaker who divides his time between western Canada, southern Mexico, and points in between.

Marcel Taminato is an anthropologist, political strategist, learning facilitator, and co-founder of Escola de Ativismo (School of Activism) in Brazil.

Harare, Dhaka, Kampala, and Oaxaca, Beautiful Rising includes stories of the Ugandan organizers who smuggled two yellow-painted pigs into parliament to protest corruption; the Burmese students’ 360-mile long march against undemocratic and overly centralized education reforms; the Lebanese “honk at parliament” campaign against politicians who had clung to power long after their term had expired; and much more.