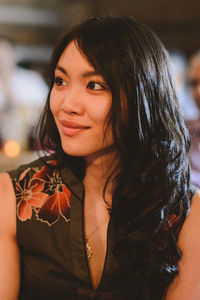 For the non-botanists among us, the title of Gillian Sze's bold new poetry collection Panicle (ECW Press) may initially be puzzling. But that challenge - to work a little harder, to look a little closer, to learn - is a theme of the collection itself. Called "singular and remarkable" (Michael Blouin), the poems asks readers to look again at first assumptions. Engaging with film, other poets, nature, and more, this is a collection of note from a prolific and talented young poet.

We welcome Gillian to Open Book today as part of our Entitled interview series, to talk about her unusual and botanically-themed title, and the impact and function of titles in general.

She tells us about the meaning of "panicle" and how it relates to the collection, why some of the best titles are a mouthful, and the alternate title that almost was for Panicle.

As I was collecting the material for this book and arranging the chapters, I enjoyed how the book was shooting off in various directions, but was unsure if anyone else would. There’s a mix of forms and styles, a visual/textual collaboration with Jessica Hiemstra, and a long poem, which I describe as “a draft for two seasons.” I happened to be admiring the illustrations in an old botany textbook and came across an image of a panicle. A panicle refers to a loose, diversely branching cluster of flowers. The concept immediately worked for my project: the organic assembly, and the sense of being tied together but without rigidity.

A title is a point of entry into a text. It doesn’t necessarily have to be the first one (though often it is), but it has to aid the reader somehow.

I have a soft spot for the title of my first chapbook with Withwords Press, This is the Colour I Love You Best. The phrase is odd and syntactically off, but its sense still comes through.

The ones that immediately come to mind are mouthfuls: The Unbearable Lightness of Being, The Sun Also Rises, The Curious Incident of the Dog in the Night-Time, The Autobiography of Alice B. Toklas.

The book was almost called Tableaux. There’s a series of tableaux vivants in the collection, but also a strong visual element overall as I draw from art and film. In the end, “tableaux” felt too static. I think a reader would’ve come to the book with different expectations if I had gone with that. “Panicle” fit better not only for the shape of the collection, but for its movement and, hopefully, surprising blooms.

A book of essays.

Gillian Sze is the author of five poetry collections, including Peeling Rambutan (Gaspereau Press, 2014) and Redrafting Winter (BuschekBooks, 2015), both of which were finalists for the QWF A.M. Klein Prize for Poetry. Her work has received awards such as the University of Winnipeg Writers’ Circle Prize and the 3Macs carte blanche Prize. She studied creative writing and English literature and has a Ph.D. in Études anglaises from Université de Montréal. Originally from Winnipeg, she now resides in Montreal.

“Succulent in its excellence, Sze’s poetry insists that cultural ‘difference’ is what can make a beautiful difference in our apprehension of the ‘beautiful.’” — George Elliott Clarke on Peeling Rambutan

In Panicle, Gillian Sze makes her readers look and, more importantly, look again. It’s a collection that challenges our notion of seeing as a passive or automatic activity by asking us to question the process of looking. The book’s first section, “Underway,” deals with the moving image and includes both poetic responses to film theory and lyrical long poems while also reimagining fairy tales. The next section, “Stagings,” takes its inspiration from the still image and explores a wide range of periods, movements, and media. Sze’s focus on the process of looking anticipates “Guillemets,” a creative translation of Roland Giguère’s 1966 chapbook, Pouvoir du Noir, which contains a series of poems accompanied by his own paintings. Sze’s approach to Giguère is two-fold: she “translates” his text, and artist Jessica Hiemstra provides a visual response to her translation. The final section, “Panicle,” continues the meditative quality of “Guillemets” in a suite of poems that ruminate on nature, desire, and history.