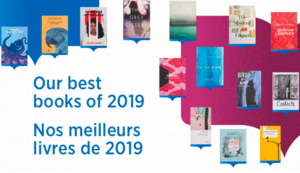 The Governor General's Literary Awards (or "the GGs", as they're affectionately known) are some of the longest running book prizes in the country. Established in 1936, the prizes, which each year award $25,000 to the winner in each of seven categories, are administered by the Canada Council for the Arts.

This year, the shortlists feature a heavy presence of books from independently operated Canadian publishers, including Coach House Books, House of Anansi Press/Groundwood Books, Guernica Editions, Book*hug Press, Brick Books, Wolsak & Wynn Publishers, ECW Press, Pajama Press, and many more. The recognition speaks to the literary excellence of independent publishing in Canada. This year, over 1,400 books in total were submitted for consideration across all seven categories in both French and English.

The winners will be announced on October 29, 2019 via the Canada Council website and the winners will be hosted at a gala dinner at Rideau Hall in Ottawa on December 12, hosted by Her Excellency the Right Honourable Julie Payette, Governor General of Canada.

In Toronto, readers can attend the TIFA (Toronto International Festival of Authors) Governor General's Literary Award event on October 27, 2019 to hear in-person readings from the fiction nominees. The event will also include the presentation of the Harbourfront Prize to author Stuart Ross.

Translation (from French to English):