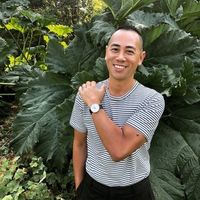 After a lifetime of trying to convince himself that he has no interest in the sailor who abandoned him and his mother, Sebastian's resolve is begin to crack. His long-suffering mother's death has changed everything, and after years of watching his biological father from afar, he can't help but feel it may be time to do more.

Sebastian is the protagonist—and the powerful beating heart—of Eddy Boudel Tan's second novel, The Rebellious Tide (Dundurn Press), and he's an unforgettable character. It's no surprise that Boudel Tan was recently named a Rising Star by the Writers' Trust of Canada; the powerful emotional landscape of The Rebellious Tide, combined with its high seas adventure that sees Sebastian posing as a crew member on his father's boat, is proof of a writer whose storytelling chops are a rare treat.

We're excited to share an excerpt from The Rebellious Tide, courtesy of Dundurn Press, so that you can get a taste of Boudel Tan's work for yourself. In this passage, we meet Sebastian as he mourns his mother and confronts his mounting obsession with the man who abandoned him thirty years ago.

Excerpt from The Rebellious Tide by Eddy Boudel Tan: 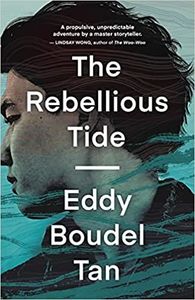 He thought he had been prepared for his mother to die. As the weeks and months had trickled by, he could almost see the life escaping through her pores. He’d remained positive for years, but the hope had drained out of him. Eventually, he knew his energy would be better spent preparing for what was to come.

It wasn’t enough. He’d underestimated his capacity to feel. Smashing the kitchen table had been an effective release, but he couldn’t ignore the burning in his lungs. He knew it wasn’t just grief and shock and loneliness. It was rage. He had kept it hidden inside for years. It was fed by every muttered insult, every Christmas they couldn’t afford, every time his mother embarrassed herself trying to fit in with the other townspeople. Most of all, the rage had grown whenever he saw that his mother wasn’t also consumed by it. More than anyone else, she had earned the right to be angry.

As he sat on the closet floor with his knees tucked against his chest, he pictured his rage and saw it had a face not so different from his own. It was the face of the man who had left them there, alone, empty-handed, in a town that would never be home.

Kostas Kourakis was his name. Sebastien had made that discovery several years earlier. He’d thought it was a strange combination of letters when he first saw it, an unfamiliar union of hard angles and gentle loops. The sound was even stranger when he said it aloud.

He’d repeated the name until it began to make sense, until it sounded like it could belong to a person who shared his blood.

His girlfriend at the time, Sophie, was throwing a party. “The theme is Belle Époque,” she had said. “Just come dressed French.”

Sebastien would never normally rummage through his mother’s closet, but he had remembered she owned a felt beret that would work with his outfit.

He found a wide rectangular box on the floor of the closet. Inside was something he’d never seen before — a white jacket with brass buttons. A single golden stripe with a diamond shape in the centre was emblazoned on the epaulet of each shoulder. He knew immediately that it must have belonged to his father.

It fit perfectly. Standing in front of Ruby’s bedroom mirror, Sebastien saw that the jacket could have been tailored to his athletic frame. It smelled musty, like dust and dampness, and the colour had yellowed over time, but it was in good shape considering its age. As he ran his hand down the inside lining, he felt something sewn into the fabric. Embroidered across a black badge were bold white letters: K. Kourakis.

After carefully replacing the jacket where he had found it, Sebastien spent the next several days discovering who his father was. He didn’t go to Sophie’s party. He locked himself in his room with his laptop and followed the clues.

It didn’t take him long to find an officer in the Hellenic Merchant Marine named Kostas Kourakis. This man had dedicated his youth to sailing the world on Greek cargo vessels but had spent the past ten years in greater comfort aboard passenger ships. One look at the man’s angular face and deep green eyes told him everything he needed to know.

Sebastien kept this to himself. He certainly wasn’t going to say a word to Ruby. Every now and then he would check in on his father online. Kostas had a wife and two young children. They would huddle together closely in each new picture as though protecting themselves from outside forces. Sebastien watched as the boy and girl grew a little older each year. Their smiles always seemed staged.

The itch to reach out to this man shamed him. He had never longed for a father, even though as a child he sometimes wondered why his family was so much smaller than others. Curiosity grew with age, then transformed itself into blame when he became more perceptive of his mother’s loneliness. Still, he’d always refused to let his father hold more space in his consciousness than the man deserved. He would almost believe himself whenever he told Ruby they didn’t need that man in their lives.

When Sophie asked if he’d consider meeting this sailor with the strange name, Sebastien’s answer was a definitive no. He had enough money saved by then for a plane ticket to Europe, but it would have been an irresponsible expense with Ruby’s condition worsening. Besides, what would be the point?

And, so, it bothered him that these images on the screen had consumed so much of his imagination. What would be the harm of sending a little message? The response could be surprising, he thought to himself.

He resisted in the end. Knowing Kostas was unaware that his forgotten son was watching over him allowed Sebastien to claim some of the power he was never born with.

“I know who you are,” he would whisper to the image on the screen. That was enough for him back then.

Now, as he sat in the protective darkness of his mother’s closet, he wondered if it was still enough.

Eddy Boudel Tan is the author of the novels After Elias and The Rebellious Tide. He's been selected as a 2021 Rising Star by the Writers' Trust of Canada and a finalist for the Edmund White Award. His work depicts a world much like our own — the heroes are flawed, truth is distorted, and there is as much hope as there is heartbreak. As a queer Asian Canadian, Eddy celebrates diverse voices through his writing. His stories can also be found in Joyland, Yolk, Gertrude Press, and the G&LR. He lives with his husband in Vancouver.

Sebastien’s search for his father leads him to a ship harbouring a dangerous secret.
Sebastien has heard only stories about his father, a mysterious sailor who abandoned his pregnant mother thirty years ago. But when his mother dies after a lifetime of struggle, he becomes obsessed with finding an explanation — perhaps even revenge.
The father he’s never met is Kostas, the commanding officer of a luxury liner sailing the Mediterranean. Posing as a member of the ship’s crew, Sebastien stalks his unwitting father in search of answers as to why he disappeared so many years ago.
After a public assault triggers outrage among the ship’s crew, Sebastien finds himself entangled in a revolt against the oppressive ruling class of officers. As the clash escalates between the powerful and the powerless, Sebastien uncovers something his father has hidden deep within the belly of the ship — a disturbing secret that will force him to confront everything he’s always wondered and feared about his own identity.