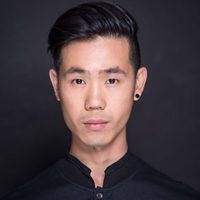 Taking us through four generations of triumph and tragedy, trace simultaneously celebrates one family's legacy while connecting it to the immigration tales of many others. Great Grandmother tells a harrowing story of her narrow escape from China during World War II. Mother, an immigrant to Canada from Hong Kong, struggles to accept her son's passion for music. Connecting multiple timelines into one voice, Ho brings us a message that resonates with undeniable humanity.

We're thrilled to have Jeff at Open Book today to talk about the first plays that influenced him, which recurring themes continue to pop up in his work, and the experience of going from actor to playwright.

Plays exist on a page, but live and breathe up on a stage. So, the experience of reading a play and witnessing a production are two different things. To that end, there are two works that absolutely shaped and affected me:

In reading, Sarah Kane’s Cleansed was the first play where a single line was so gorgeously written, so painfully true, that I sat there, shocked, and re-read the same line over and over again until I could finally move on. In it, there’s this love scene where a character lays out their hesitation in love: I love you now, I’m with you now, I promise moment to moment not to betray you. That’s it. No more. Don’t make me lie to you. It’s so sharp, so bleak, and is this harsh truth – a real offering of love, I would say.

In performance, I remember being totally stunned by a touring production of Scorched (Incendies) by Wajdi Mouawad. The English translation of the play was originally produced by the Tarragon Theatre and was touring to Montreal while I was at school there. I went alone, on a Wednesday matinee meant for seniors, and I remember sitting there with my mouth agape, stunned by the sheer beauty of the language, the story, the poetry, the performance, the way that base survival and atrocities were rendered so truthfully, and in a way, beautifully. The idea that hope and a better life are tied to many sacrifices. It changed my life.

It really depends on the play! Having made my start in the theatre as an actor, I almost always read my plays aloud as I go. My sweet boyfriend always has to settle down at some point and listen to a solo show version of a play (one time, I wrote a cast of eight and proceeded to do the whole thing solo for him). Oftentimes, I am simultaneously speaking/improvising my lines while typing them out. I don’t think about physical blocking while I write, as I love seeing what directors can imagine with a group of actors and collaborators. On trace, since I wrote it as a one man show, and quite honestly, for myself to perform, I would improvise a scene aloud, then settle it on the page once I found an arc.

A theme has crept up over and over again in my plays, this idea of: stay and die or leave and live. The idea of leaving for greener grass, a better life, of being uprooted. I don’t think I’ve quite yet settled the immigrant identity in me but am certainly surprised it keeps on finding its way in when I write plays… even if it’s adaptations of Greek classics! I guess it’s certainly a resonant theme that I recognize in the world, and in myself.

It varies. Sometimes, I leave it be, and walk about or cook or go do other things until my brain resolves it. Sometimes, I simply throw it out and start from scratch. Sometimes, I cut everything down to its core actions, so that every line is driven by a need, and then tuck in the threads afterwards.

Recently, a speech that I simply loved on the page just didn’t fly on stage and to this day I am still reconciling why it didn’t work – oftentimes it’s the writing, but theatre is alchemical. The magic didn’t happen that time.

How would you describe the theatre and playwriting community in Canada? What strengths and weaknesses do you observe within the community?

We have a strong theatre-creating community in Canada. As an actor, on tour, I get an exciting chance to see what other cities are buzzing on, and Canada is so big that you can really differentiate between each community! Vancouver knocks my socks off with how they embrace the abstract and the conceptual. Montreal and Francophone theatre are to this day some of my favourite theatre-going experiences – their actors must drink some sort of superhero concoction, they perform with their guts on their sleeves. Toronto is definitely a very text-driven community, certainly there are physical or more conceptually based productions that happen, but we have more companies here devoted to nurturing and producing new plays than any other city in the country. I feel very fortunate to be based here for that reason.

We are at this monumental cultural shift, with more female-identifying artistic directors leading producing companies than ever before, and more non-mainstream artists across many intersections - ability, economy, race, gender ­- are getting chances to shine. The work continues, but I am very hopeful, as I already see the next generation of exceptionally talented performers and creators ready to change our perception of theatre and redefine excellence beyond whiteness.

What is the best thing about being a playwright, and what is the worst?

The best thing about being a playwright is the collaboration. The idea that writers work alone is very true, for me at least. There is always a phase where I am struggling to get the words on a page, alone, at home, with bubble tea and chocolate by my side to soothe me. Eventually, there will be a team of performers, directors, producers, designers, and other voices that guide me toward a living entity on a stage. The conversations with collaborators inform the play, and the rewrites begin… and that is where the fun begins, the moving of jigsaw puzzles, and the moments of discovery.

The worst thing about being a playwright is the battle with time. As an actor, you can find out you got a job and be on-set within a week. As a playwright, one of my productions took four to five years to finally make it on the stage, and as a very impatient person, that sort of marathon is a different rhythm. Another production of mine took six months from commission to production, and with that one, I was praying for another four years to rewrite the play! So, it varies, but that inconsistent rhythm of process is one I’m still working at.

Jeff Ho is a Toronto-based theatre artist, originally from Hong Kong. As a playwright, his works include Iphigenia and the Furies (On Taurian Land); Antigone; and trace. He has held residencies with the Stratford Festival, Nightswimming, Cahoots, the Banff Playwrights Lab, and Factory Theatre, and is a Bulmash-Siegel Playwright-in-Residence with Tarragon Theatre. Jeff has received a Toronto Theatre Critics Award for Best New Canadian Play for Iphigenia and the Furies, has been thrice nominated for the Dora Mavor Moore Award—twice for performance and once as a playwright—and has been awarded a Harold Award. He is a graduate of the National Theatre School.

"I support you when you need, so that you support me when I need. "

An elegant and sweeping story of a Chinese family’s history, trace follows the footsteps of four generations as their homes and identities are challenged. Jeff Ho brings life to his great-grandmother, grandmother, and mother through considerate storytelling as they recount their pasts, leading to a paralleled present.

Great-grandmother fled the Japanese during World War II by escaping China into Hong Kong, a traumatic effect that’s rippled down the family line. Grandmother married into the family after a childhood of poverty that will always stay with her. Mother decided to leave Hong Kong for Canada with her two sons, pursuing more opportunities, though dissatisfied with her son’s desire to focus on the piano rather than math. Though pain is a constant, there are plenty of wisecracks, games of Mahjong, and familiar family anecdotes swirling through Ho’s genealogical journey of survival.