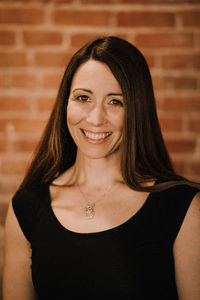 Could anyone blame Mother Earth if she started feeling a little, well, vengeful? In Jaime Lee Mann's Ancient Fall (Blue Moon Publishers), the earth has had enough of the humans who exploit her, who have been mistreating her through the power of a dark curse for centuries. And when she decides to fight back, everything changes.

Twins Asher and Ariana Caine are caught in the middle of it all, trapped in a land of ice and snow and desperate to break the curse that has caused humans to treat their natural environment so badly. There's still time to make peace with Mother Earth, but it's running out fast, and if Asher and Ariana fail, humanity as they know it will be, perhaps rightfully, doomed.

The seventh and last book in Mann's bestselling Legend of Rhyme series, Ancient Fall is a timely, environmentally aware adventure story for middle grade and young adult readers. We're excited to welcome Jaime to Open Book today to talk about the novel, the series, and the process of writing for young readers as part of our Kids Club interview series.

She shares with us about the moment the series' ending came to her, common misconceptions about writing for young people, and the responsibility and excitement she feels when it comes to "planting seeds".

Ancient Fall is the final instalment in my seven-part Legend of Rhyme Series. I have had the idea for the storyline of this new book in my head for a couple of years now. One day, shortly after Into Coraira (book 2) was published, I was standing at the kitchen sink, washing the dishes, and a scene come into my mind; it was the ending of the series. I ran away, emailed my publisher with my exciting revelation, and furiously began writing. That big idea helped me to bring the entire series into a beautiful, climactic finale. I’m so happy with it.

There are multiple messages that I hope kids and adults alike will take away from Ancient Fall. While in prior books, there were many things going on, pulling characters into different realms and into different issues, this book brings everyone together to solve one single problem facing the entire world... Mother Earth has taken back the planet in a rather dramatic and terrifying way. In scenes that are eerily similar to what we’re seeing these days on the news, humanity is facing a number of catastrophic environmental disasters. It is clear in Ancient Fall that it is up to the new generation to save the planet that those before have helped lead into a state of deterioration.

I truly hope that readers will think about ways they can do their part to help heal the planet, and that they will consider the impact they have on their environment. There are also messages throughout the series that touch on abuse, mental illness, and the ever-present moral that things are often not as they appear upon the surface. In short, I want my readers to question the world around them. I’ve worked hard to ensure that the lessons I’ve included are not delivered as a lecture, but as part of an action adventure, so that kids are entertained while maybe learning to look at their worlds a little bit differently.

I can relate to all of my characters on some level, but in Ancient Fall, I have the most empathy for my personified Mother Nature. I know what it means to love someone to the ends of infinity, the way Mother Nature cares about her planet. I would do anything to protect those I love—especially my children—the way she is fighting to protect all she has provided humanity.

We are both patient, but I think Mother Nature is more patient than I. I’m not sure I would have been strong enough to suffer the abuse she did for as long as she did, without taking drastic action.

I think one misconception about writing for children is that it’s easier than writing for adults because you can be more simplistic with your language. I disagree. I believe that writing for children is no different than writing for adults. When I sat down to write this series, I knew that I didn’t want to be condescending to my young readers. I included vivid imagery, strong descriptors, and children tell me they appreciate my word choice. Some of the books that have stayed with me the most throughout my life are the ones I latched onto when I was between the ages of 9 and 16. I feel a great deal of responsibility when writing for middle grade children because I have the power to plant seeds in their young minds that may actually take hold and change the way they behave in the world. How amazing is that?

In my opinion, a great book for young readers is one that sucks them in and inspires them to keep reading! Whether it’s a graphic novel or a fantasy series, or a mystery novel, if a book makes a child love to read, that’s a winner. However, if I were to name two books that I consider to be truly great kids books, they would be The Lion, The Witch, and the Wardrobe by C.S. Lewis (this book opened up my imagination like no other ever has), and The Lorax, by Dr. Seuss (such an important message written in such a beautiful way).

Now that the Legend of Rhyme series is complete, I am working on writing it so that it may be produced as a mini-series or film. As I wrote the series, I did so considering how it would look on the screen. Every time I am in front of a group of children, reading from my books, I get asked about whether or not the books will become movies. I’m going to do what I can to make that happen.

Jaime Lee Mann is a bestselling author of the Canadian fantasy series, The Legend of Rhyme. When Jaime Lee isn’t writing (for herself or someone else), she can most likely be found playing Barbie with her daughters, working out at the local kettlebell studio, or in the kitchen making something delicious.

The enchanted land of Coraira has died, preventing entry for twins Asher and Ariana Caine. They are now trapped alone in the realm of ice and snow, unable to use their magical powers to escape.
Meanwhile, the wise Ancients—the twins’ mentors—have each been stolen by a mysterious cloud. Vengeful Mother Earth has finally decided to fight back against the humans who have been abusing her for centuries.
Through a series of visions and prophecies, it becomes evident that a dark curse may be responsible for humanity's actions. Now, the curse must be broken before the rare twin moons reach their highest point in the sky if there is to be any hope that Mother Earth will return the world to humankind.
Will the Caine twins make it out of the ice realm alive?
Will the heirs of Elora and Larque figure out how to lift the curse?
And what will happen to everyone if Mother Earth wins?