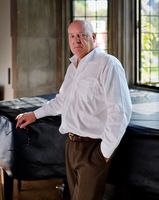 Ian Hamilton, known for his two beloved series, the Ava Lee mysteries and their companion Uncle Chow Tung books, is branching out to new territory with a stand-alone novel that delves deep into a family's complicated past. Bonnie Jack (House of Anansi Press) follows the title character from Glasgow, where he is abandoned in a cinema as a child, to his retirement in the United States.

As he looks back on his life, Jack becomes determined to finally unravel the decades of mystery and the secrets that surrounded his family and his tragic childhood. He and his wife set out for Scotland to search for his long-list sister; what he finds there, however, is not what he, or anyone, expected. With Hamilton's signature keen eye and knack for making dark twists and turns into addictive reading, Bonnie Jack is a welcome addition to Hamilton's oeuvre.

We're thrilled to welcome Ian to Open Book to talk about Bonnie Jack as part of our Long Story series for novelists. He tells us about his connections to the book's vibrant settings, shares a line we love from his favourite character in the novel, and opens up about the tragic family secret that inspired Jack's origin.

I have been thinking about a book with this theme for years, and actually wrote the prologue about five years ago. But other writing priorities (Ava Lee/Uncle) dominated, and I didn't feel ready to start Bonnie Jack until two years ago. Once I did start, the story's structure was so clear in my head that the first draft only took a few months to write.

How did you choose the setting for your novel? What connection, if any, did you have to the setting when you began writing?

The settings virtually chose themselves. As in my Ava Lee books, I prefer writing about places I've been to and know. In the case of Bonnie Jack, part of the book is set in Wellesley, Massachusetts, a wealthy Boston suburb. I lived there for two years, and actually modelled the house the Andersons live in on one that was next door to mine. Similarly, I spent part of my childhood in Irvine, Scotland, and since then have traveled extensively for business and pleasure over most of the country including Pitlochry, Glasgow, Troon, and Edinburgh.

Did the ending of your novel change at all through the drafts? If so, how?

The last chapter never changed, but the previous three did - primarily through elimination rather than addition. In fact, in the second draft, I removed what had been the third last chapter entirely. For that same draft, I also rewrote the beginning set in Wellesley, and eliminated a character.

Did you find yourself having a favourite among your characters? If so, who was it, and why?

I was drawn to Georgie, Jack Anderson's sister, but if I had to choose one character it would be Anne, Jack's wife. In my mind, Jack wasn't particularly likeable, and Anne was the best part of him. This was something he actually commented on. She begins the book as a wife and mother with no particular distinction other than that, but as the book progresses her intelligence, sensitivity, and her inability to be anything but honest emerge. There are several lines in the book where her strength of character becomes apparent. A favourite of mine is her response when Jack is critical that she's seeing both sides of an issue rather than simply blindly agreeing with him. She says: "I was raised to have an open mind, and it bothers me that some people confuse that with lack of conviction."

What was the strangest or most memorable moment or experience during the writing process for me?

When I was a boy in Irvine, my brother and I had dinner every Friday after school with my grandfather and his second wife, Aunt Nan. We regarded her as our grandmother, and assumed she thought of us as her grandchildren. I was 11 when I left Scotland, and didn't see her again for 19 years. When I did, she couldn't have been colder or less welcoming. When I started writing about Jack's meeting with his sister Moira, Moira immediately morphed into Aunt Nan in my mind. I hadn't expected that, but I went with it - including the description of her physically, of her manner, and the tiny house in which she lived.

Who did you dedicate your novel to and why?

I dedicated the book to my father - a man who spent his life trying to conquer his demons and never quite could. Like Jack, he was abandoned in a movie house by his mother when he was six, and kept that secret from my mother and his children for 50 years. The abandonment scarred him. He was a man who was (understandably) full of insecurity which he tried to overcome with booze which only made him angry and sometimes violent. He was clever and hard-working, though, and I like to think that if he had been adopted by people as loving the Andersons, things might have been different. In any event, I have given him a voice and an alternate life that I think he would have been proud of.

Ian Hamilton is the acclaimed author of fourteen novels in the Ava Lee series and three in the Lost Decades of Uncle Chow Tung series. His books have been shortlisted for numerous prizes, including the Arthur Ellis Award, the Barry Award, and the Lambda Literary Prize, and are national bestsellers. BBC Culture named Hamilton one of the ten mystery/crime writers from the last thirty years who should be on your bookshelf. Bonnie Jack is his first stand-alone novel.

From the acclaimed author of the internationally bestselling Ava Lee novels, a bold and captivating new novel about a search for lost family and the cost of keeping secrets.

As a boy, Jack Anderson was abandoned by his mother in a Glasgow movie theatre. Now living in the United States and facing his impending retirement, Jack and his wife Anne travel to Scotland to track down his long-lost sister. Their journey takes them from their home in a quiet Boston suburb to the impoverished mill towns of Ayrshire, the gray cobbled streets of Glasgow, and the majestic Scottish Highlands. Along the way, Jack gets entangled in local affairs and must confront uncomfortable truths about family, legacy, and the wife he thought he knew.

Bonnie Jack, the first stand-alone novel by acclaimed author Ian Hamilton, is a compelling story about the importance of family, self-discovery, and the lengths we go to protect the ones we love.