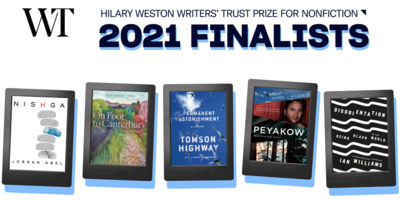 This morning, the Writers' Trust of Canada announced the five 2021 finalists for the Hilary Weston Writers’ Trust Prize for Nonfiction, the $60,000 award that has quickly come to be the defining nonfiction prize in Canada. The 2021 jury of Kevin Chong, Terese Marie Mailhot, and Adam Shoalts read over 100 books submitted by 64 publishers across the country before landing on a five-title shortlist.

With past Scotiabank Giller Prize, Indspire Award, and Griffin Poetry Prize winners, it's a list filled with serious heavy-hitters of Canadian literature, and also one that continues the trend of rewarding powerful memoir, a genre that had traditionally been overlooked in nonfiction prize lists prior to the twenty-first century. The list also reflects the desire to learn and listen to the long buried and denied stories of residential schools, with three decorated Indigenous writers on the list addressing the abuse that took place in the racist school system, each through their own unique lens.

The winner will be announced via livestream on Wednesday, November 3 as part of the Writers' Trust Awards (which will also feature the presentation of five other major awards).

2021 Shortlist for the Hilary Weston Writers’ Trust Prize for Nonfiction:

The shortlisted titles will be available in accessible formats for different types of print disability through the Centre for Equitable Library Access (CELA) at celalibrary.ca/awards.
The Weston Prize, as it is often known, has been sponsored by The Hon. Hilary M. Weston since 2011 and succeeds the Writers’ Trust Nonfiction Prize, which was established in 1997.