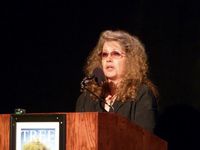 Julia McCarthy's All the Names Between (Bricks Books) has been praised for its "incomparable eloquence" (Clarise Foster, editor of Contemporary Verse 2) and called "a book of meditations for even those immune to poetry" (poet Goran Simić). McCarthy's third collection focuses on moments of meeting and intersection, of contrast and otherworldly overlap, as captured in the hypnotic line: “every elegy has an ode at its centre/ every ode has an elegy around its edges.”

We're pleased to welcome Julia to Open Book today to talk in-depth about All the Names Between. She tells us about how separation and connection can be two sides of the same coin, how the prevalence of elegy in contemporary poetry reflects our reticence to speak about grief and loss in other venues, and about her unique (and bat-adjacent) Nova Scotia writing room.

The poems in All the Names Between seem to thrive in moments of meeting – the dead and the living, the internal and external, language and silence.What about these points of intersection or crossover captured your imagination while writing?

That intersection/overlap/chiasma has interested me since childhood and helped shape all three of my books... the world seems to overflow itself, a constant stream, much of which is conscious, entering my consciousness... I want to acknowledge and recognize that experience, that overlap, the Tat Tvam Asi (in Sanskrit which translates variously: Thou art That; That art Thou; That thou art) and place a poem there. Another way of looking at it may be the more western version: Martin Buber’s I-Thou relationship: that hyphen, the relationship/connection between the ‘I’ and ‘Thou'... that hyphen separates as well as connects. There’s the rub. When I’m writing, my hope is simply to open to that, to write into an awareness and acknowledgement of what is neither wholly my ‘self’ nor utterly ‘other’, to make a space where both find a home in the poem. In this sense the poem itself becomes the hyphen between dualities, one of the names between.

There's a sense of reverence in many of the pieces here, an attention to the idea of elegy and remembrance. Is this something you set out to explore atmospherically, or did it emerge as you began to put the collection together?

I’m pleased that sense of reverence comes through. In working on the poems, attending to my sense of the place in which I live, witnessing changes in the forest and the near extinction of bats and some birds and flora; myself getting to an age where there is often more bad news than good, it became clear to me that the elegy is a type of love poem. We can only see the stars at night... all too often in this culture we are sold the positive as though it were discrete, not intimately connected to the shadows.

This duality and the space between haunted this manuscript... that space is fluid and the poems were a way of opening to that ambiguity, of focusing on the ‘both/and’ rather than the ‘either/or’ that duality often implies or is interpreted as representing. The ambiguity of my language speaks to this throughout the poems, and runs counter to our craving for ‘precision’ which seems a fiction to me.

I’d also begun to wonder if the prevalence of the elegy in North American poetry was in part a compensation for our dominant culture’s allergy or illiteracy when it comes to grief, dying, death, our dead.  Our culture is deeply ambivalent about memory and forgetting. While we pathologize forgetfulness on the individual level especially in the later years, we are collectively skillful at forgetting; we’re wonderful with palliatives, especially in our language, we have ‘celebrations of life’ instead of ‘funerals.’

I wondered what this might mean in terms of cultural amnesia, the collective dissociative relationship our culture has with land, with ‘nature’ (and thus with ourselves), what we refer to so often and impersonally as our ‘environment.’ That word seems to me to reflect a sense of homelessness, a poor inheritance and one that I fear might be our legacy as well. This is the ground from which these poems grew...

This is your third collection. How are you feeling about your experiences as a writer at this point? Do you feel different from when you wrote your first collection, and if so, in what ways?

On the one hand, one book leads to another, on the other, it gets harder. Ambiguity has become more important to my work... I live in the ‘meanwhile’ as I suspect we all do. I am and am not different from when I wrote my first book... younger selves are burned away... I always hope to write from my elder self.

This book and my last were written entirely at my little house in the backwoods of Nova Scotia... my writing room is a small dormer overlooking a field, an orchard and forest that extends down to a river. Some years ago, I put in walking trails through the forest so I spend a lot of time there. This part of the Acadian forest is struggling... spruce beetles are decimating the spruce, another beetle is making inroads as well. Much of the forest is blighted so it is a time of transformation. For about 15 years, my spring and summer evenings were spent visiting a nearby site that bats colonized as a nursery (there are bat caves/hibernacula about 15 minutes away) and then about 6 years ago, there were no bats at all, the nursery near me silent at dusk.

It was eerie, and huge. I think this set the tone for the book. Last summer I saw 4 bats in one night but have seen none since... they are struggling to come back from the decimation of White Nose Fungus. However, there’s also been an increase in bald eagles and other birds of prey and now beavers have moved up the river and dammed it.

Because I live so rurally, there is no light pollution... I step outside my door and can see the Milky Way. This has been incredibly important.

Nothing puts one in one’s place, and centres one, like the stars and constellations. I come inside and rub some words together…it seems an ancient thing to do out of gratitude for, recognition of mystery. All of my surroundings have been generous. This is the daily stuff of my life and writing.

I can’t say I avoided anything in particular... I’ve been reading more and more of James Hillman whose thinking is brilliant and necessary in these times. I sought out some Carl Jung and alchemical texts; Heraclitus is a standby, Ovid, and Paul Celan’s work, his poetry and prose, his notion of a poem as a homeland, as a message in a bottle.

I’ll have to wait and see what finds me... I’ve a few new poems, but feel I need a rest from words for a while... finishing a book always tires me out.

Julia McCarthy is originally from Toronto, ON. She spent a decade living in the U.S., most notably in Alaska and Georgia. She also lived in Norway and spent significant time in South Africa before returning to Canada and settling in rural Nova Scotia where she worked as a potter to support her poetry habit. She is the author of two previous poetry collections: Stormthrower (Wolsak and Wynn, 2002) and Return from Erebus (Brick Books, 2010), the latter of which received the Canadian Authors Association Poetry Award.

All the Names Between

Poems that form an eloquent, searching contemplation of  “the warp and weft of being and nonbeing”

All the Names Between is Julia McCarthy’s third collection. Grounded in the experience of presence in which the external and internal meet, a crossroads of consciousness where “a language without a name / remembers us” and the poem is a votive act, All the Names Between reflects the shadow-light of being, of what is and what isn’t, of the seen and the unseen, the forgotten and the remembered; here “every elegy has an ode at its centre / every ode has an elegy around its edges.”