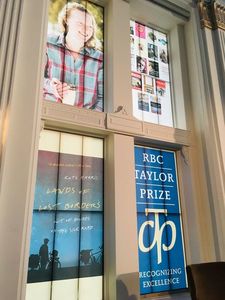 This afternoon, Kate Harris spoke about the "glory and pain" of both the bike trip that inspired her memoir Lands of Lost Borders: Out of Bounds on the Silk Road (Knopf Canada) and of the writing process itself, discussing how both challenges changed her life.

Harris was addressing the crowd of publishers, agents, readers, and media in the Omni King Edward Hotel ballroom in Toronto, being interviewed on stage as one of the finalists for the prestigious RBC Taylor Prize for Nonfiction. When she was announced as the winner, she received a standing ovation.

Jurors Camilla Gibb, Roy MacGregor, and Beverley McLachlin, also spoke, joking about the monumental task of reading over 100 books and selecting a winner from the strong submissions. "It's like a book club for masochists," said Gibb. McLachlin (former Chief Justice of Canada) agreed on the challenging volume of the reading, remarking that "[books] kept rolling into my house." MacGregor summed up the daunting task, saying it was "at times gruelling, at times magical."

The jurors also spoke passionately of the finalists' work, saying they looked first and foremost for "the ability to tell a story [and] the power of the language." 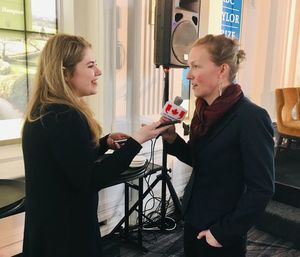 Prize founder Noreen Taylor added her praise in her summation of Harris' book, saying that "in an increasingly complex and volatile time, Kate Harris chose to look beyond the challenges of the here-and-now, and instead, remind us to care for one another, to care about the world we live in and to care about what makes living most rewarding. It is a much-needed message, superbly told."

Each finalist received $5,000, with Harris receiving an additional $25,000 as the winner. The remaining finalists are Bill Gaston, shortlisted for Just Let Me Look at You: On Fatherhood (Hamish Hamilton/Penguin Canada); Ian Hampton, shortlisted for Jan in 35 Pieces: A Memoir in Music (Porcupine’s Quill); Elizabeth Hay, shortlisted for All Things Consoled: A Daughter’s Memoir (McClelland & Stewart); and Darrel J. McLeod, shortlisted for Mamaskatch: A Cree Coming of Age (Douglas & McIntyre).

Each of the finalists spoke, discussing their books and the craft of writing nonfiction. Gaston, a noted fiction writer, commented on the process saying, "at first I thought 'this is easy, just tell the truth.' But to tell the truth, you have to figure out what the truth is." 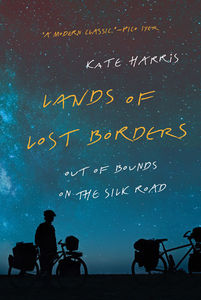 Last year's winner, Tanya Talaga, author of Seven Fallen Feathers: Racism, Death, and Hard Truths in a Northern City was also present. Talaga selected Alicia Elliott (who we are proud to count as an Open Book columnist!) as the 2018 Emerging Writer prize winner.