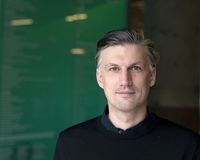 A son forces his mother to face the devastating impact of her gambling addiction. A divorcee living in a run-down trailer park becomes obsessed with the activities of the people next door. Two long-time friends find happiness together after the deaths of their partners, only to find it tragically short-lived.

The tough, reedy stories of Michael Melgaard's debut collection Pallbearing (House of Anansi) are not always easy on the heart, but the reward is well worth it. Using sparse, readable prose that packs a deceptive emotional haymaker, Melgaard's characters are isolated loners and prisoners of circumstance; the kind of people no one never notices, but who have their own stories to tell. A rich and compelling collection, Pallbearing is a powerfully restrained debut showcasing the craftsmanship and deep emotional intelligence of its author.

We're thrilled to have Michael at Open Book today to discuss why putting a collection together is much like a band heading into the studio, the grueling process of choosing titles, and why he doesn't like to celebrate too soon.

I approached putting together the collection like a band going into the studio to record an album. Generally speaking, a band will have a lot of demos and half-finished ideas when they start to record. A producer sifts through those ideas, picks out the best, and those are the songs that become the album. With my collection, I had about thirty stories that had piled up since I started writing regularly in 2008. My agent and an editor friend went through everything I’d written, picked out the twenty stories they thought strongest, and gave me notes for improving them. When my book was signed, my editor at Anansi (Doug Richmond) and I talked a lot about the balance of humorous versus sad stories and the how each worked in sequence. A few more stories were cut because they were thematically too similar to others, and I added a new one at the last minute. It was helpful to have too much to work with, because we could really shape the collection as we wanted—it’s easier to take away then to add.

As my stories started to pile up, I noticed that I was often writing about my hometown and people I knew as a child. My dad was a bricklayer who became a general contractor, and he had a crew he worked with that were around my whole childhood. A lot of what I heard and saw from them inspired the first batch of stories that would become this collection. When I saw this theme emerge, I started writing more and more about home, thinking they might be linked in some way. In the end, not every story in the collection ended up being set in my hometown, but all the stories did end up sharing a feeling of oppression and being trapped by circumstance that the first stories had.

I’m not good at naming stories and end up giving them a title based on whatever the story is about—I have a story about an auction that I called “Auction,” a story about a guy who works in a Fun Centre called “Fun Centre.” You get the idea. I usually put the names in as placeholders on early drafts and then can’t think of anything better after the story is done—it barely matters what you call a short story, anyways. Initially, I picked the story “When Things Wear Away Other Things,” as the title story. My agent hated it. I tried it out with my editor; he also hated it. So, we tried a few other story titles before I floated “Pallbearing” without much hope—it seemed a little bleak—but my editor loved it and, though there were concerns in the sales department, they came around eventually—it is, after all, a title that sets you up for what is inside.

The collection I return to the most—one where I can flip open to any story and be happy I did--is by Norman Levine. He’s a Canadian writer who has never really caught on. He published eight story collections in his life, and there have been two “complete collections” published since 2000 (most recently by Biblioasis), but neither seems to have started a revival of interest in him -  possibly because he’s better in small doses. Reading all of his stories back-to-back, you start to feel they are  a bit similar – many feature a broke writer who goes out into the world and has an unpleasant time—but if you stick with a shorter collection, or just dip into the complete, you’re left wanting more.  He does wonders creating mood—a sort of bleak, detached but trapped feeling. Lots of dark humor, too. He’s just remarkable and I hope one day someone publishes a well-curated “Selected Stories” of his— that might be just the thing to spur the proper revival he deserves.

I’ve worked in publishing for many years, so I know that the final draft is not anything of the sort—after you type the last word, there’s still editing, proofreading, final proofs to check. By the time I got through that whole process, I was more exhausted than celebratory. The moments that have stuck with me were things like my first story acceptance, landing an agent, and, of course, signing with Anansi. But even those were subdued celebrations—when my first story published, I was already worrying about the second; when I got an agent, I dreaded the coming submission process; and when I signed with Anansi, I knew it would be a couple of years before the book came out. I think the real celebration will start a couple of minutes after I finish the reading at my book launch. Then it will be properly out there and there will be no more I can worry about--that is the thing to celebrate.

Michael Melgaard is a writer and editor based in Toronto. His fiction has appeared in Joyland, the Puritan, and Bad Nudes, among other publications. He is a former regular contributor to the National Post’s book section and has written articles and criticism for the Millions, Torontoist, and Canadian Notes & Queries. Pallbearing is his first book.

An honest and unaffected collection of human experiences that deftly tackles themes of grief, loss, missed opportunities, and the pain of letting go.

The stories in Michael Melgaard’s poignant debut collection Pallbearing offer candid snapshots of life in a small town, where the struggle to make ends meet forces people into desperate choices. In “Little to Lose,” a son confronts his mother over the crushing prison of debt created by her gambling addiction. The aging divorcée in “Coming and Going” spends her days in paranoid pursuit of evidence to incriminate her neighbours in the derelict trailer park where she lives. And in “Clarence and Rose,” lifelong friends find love after their respective partners die, and then face loss all over again. With deceptively spare prose that carries outsized emotional weight and pathos, Melgaard brings his characters to life in sharp-edged portraits and all-too-human dilemmas, creating engaging stories that resonate with honesty and depth, and linger in the imagination.