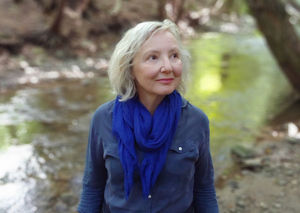 In Laurie Ray Hill's novel Paper Stones (Inanna Publications), Rose has one goal: to protect her baby niece, Jenny. In a family haunted by sexual abuse, Rose is determined the horrific pattern will be broken in Jenny and that the girl will grow up with the champion Rose herself never had.

She finds allies in a therapy group, who come to be more than just a support network for Rose when Josie, who possesses an uncanny second sight, has a premonition of a more peaceful life for them all in a picturesque northern town. Where this town is and how they can get there becomes the inner fuel in Rose's recovery, her quest to protect Jenny, and the group's blossoming connection.

Raw, honest, gently funny, and unique in its fantastical elements that serve to represent the magic of rebuilding, Paper Stones is a journey that will fill readers with hope.

We're excited to talk to Laurie today as part of our Long Story interview series for novelists. She tells us about where fiction and her own life intersect in the story, explains how the psychological concept of "shifts" informed the narrative (and the title), and shares the strange and delightful experience of meeting her main character in real life.

Paper Stones started in happiness. Sustained peace with myself was new. I was in a state of wonder at this lightness. It seemed like magic. For a long time, I had not been able to believe that the comfort could last. But it did. Weeks and months and years went by and it didn’t go away. Everybody laughs at the notion of living “happily ever after” but that seemed to be pretty much the case. I came to see that the long struggle with my abuse in childhood and its ugly consequences, which had messed me up for decades, were actually over. What it felt like to be me had permanently improved. I had a need to explore, in depth, how this transformation had been possible. Isn’t this what millions of people long for? How, exactly, did I get so lucky? This led me back to the drastic beginnings, down into the creepy old cellars of memory. Paper Stones is fiction but the stepping stones themselves, the shifts in perspective, the progressive stages in this kind of healing, are placed carefully and truthfully, where my feet found them. The types of helpers that reached out their hands along the way are there too. All the humiliating types of screw-ups and setbacks are there. Even the weird folktale sense of luck and magic insisted on being part of it, and sparkling through the story.

The small-town Ontario setting came with the narrator’s voice. A warm, gritty, funny, down-to-earth character started yacking away, telling the story in her own words. I loved her. She made me laugh and she kept me company when the going got rough. Her down-home, rural Ontario voice sounded like anybody you might hear in the neck of the woods where I live—say, at the farmers’ market or the feed store or the greasy spoon. To me that sound was the sound of home. I grew up among many people who speak this particular flavour of English. The way they put things seems strong, to-the-point, quick, and funny. I felt that this voice could go with the reader and me and talk us through the hard stuff. It seemed like a sturdy companion, good to have around. Small town and rural Ontario is where you can hear these voices.

A group of friends who meet in a therapy group for survivors of childhood sexual abuse re-imagine and re-build their lives.

A fun part of the research for this book was collecting local speech patterns and sayings. I kept a notebook and jotted down good ones that I heard. The whole family was in on it. My brother called one day and said, "I’ve got one for you. Heard it at the hardware. Ready?" I grabbed my notebook. "OK: She’s so ugly she’d make a train take a dirt road." I gave that line to a terrible boyfriend, discarded early in the book.

I was meticulous about getting the psychology right and became absorbed and fascinated by what they call "shifts". These are the shifts in perspective that allow us to learn and heal. Shifts are the basis for the paper stepping stones that Rose makes as she learns and heals. Two psychologists and a professor of Child and Youth Care were advisors. One has a T-shirt that says Shift Happens.

I had been wondering if Rose, this homespun heroine of mine, was plausible. Could somebody like Rose, with no opportunities or education, express such a great range of thought and feeling? I was also wondering whether the fantasy in the book, the dream of building a lodge on a northern lake and running it for tourists, was a plausible goal for her.

I was nearly finished writing the book when I met an actual person very much like Rose. She talked like Rose. Her background was just as rough and her insight just as great. To myself, I called her Real-Life Rose.

My work involved spending time with Real-Life Rose and here’s where it gets weird. One day, out of the blue, she said, 'You know what I always dreamed of doing?"

She said, "Always thought I’d like to have a lodge on a lake back north, run it for tourists."

I had already learned the wonderful stuff in Paper Stones before I wrote it—what friendship and good advice and love and hope and working on your issues can do for a person—I had already found out. What was still for me to learn from writing about it was how to write about it. Specifically, I had to find out how to stretch energy across a whole novel. I learned to think about this energy as a rubber band, stretching from beginning to end. I learned how to set up expectations and questions near the beginning and hold back against them, to make that elastic pull on the reader, how to put tension and snap into it. I learned how to make a deep, quiet, personal reflection into a bit of a page turner.

Laurie Ray Hill is best known in her area as a playwright. She has had plays produced and has won awards including selection of one play as Finalist in Theatre BC’s Canadian National Playwrighting Competition and another as Eastern Ontario Drama League Best Original Script. She taught creative writing for many years with Loyalist College. Vision Loss Rehabilitation was a beloved career that took Laurie to homes and schools throughout a wide region, working with people who, like her own father, were blind or visually impaired, teaching specialized travel skills like street crossing with white cane or guide dog. (Watch for a book about those adventures some day!) All along, she has been secretly writing novels.. Recently retired, she is happy that Innana Publications is bringing the first one, Paper Stones, to light.

From the moment she holds her baby niece, Rose is on a mission. Terrified that her baby niece will fall victim to the sexual abuse rampant in the family, Rose tells us in her own warm, funny, down-to-earth voice, how she reluctantly agrees to join a therapy group, hoping she can find out how to prevent disaster and see that baby Jenny grows up unharmed. In the group, she meets new friends who will become like family: Josie, who “sees” the future; Tammy, with a suspicious bruise on her neck; good and steady Marg, whose father is threatening to burn down her apartment house; and sweet, grieving, spiritual Sally. Rose’s own chronic problem, she confesses, is picking wrong men. Josie finds a small magazine picture of a little town in northern Ontario. She sees, with her second sight, a resort hotel to be built in this town and a sunnier life for the group. As they begin to take the first painful steps of emotional recovery, an intense fantasy about this unknown town and dream hotel becomes the secret life of the group. Deep friendships evolve as the women help one another through the roller coasters of their recovery process. Despite setbacks, they cling to their dream of moving up north and running their own hotel.