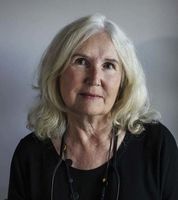 It was a passing comment from an aunt that revealed a family tragedy to Lorri Neilsen Glenn. Once Lorri learned of her great-grandmother's untimely death, she found herself drawn down a path of family history that intersected with issues of racism, sexism, and colonialism. The result of her research is Following the River: Traces of Red River Women (Wolsak & Wynn).

In prose and poetry, mining newspaper reports and museum archives, she achieves a fragmented beauty, finding the stories of not only her own family but of the women, often Indigenous and Metis, who were erased and silenced, and whose stories were so often lost.

We're pleased to welcome Lorri to Open Book today to talk about Following the River. She asks why don’t we know more about First Nations women's history, talks about why drawing on multiple genres was so appropriate for this project, and sums up the writing process with one of the best two word descriptions we've come across: "hard fun".

My great-grandmother died in a steamboat fire off Norway House, Manitoba over a hundred years ago. I didn’t know her death was an international story, nor did I know my Indigenous roots go back to the mid-1700s. And despite the fact I was raised on the prairies, my knowledge of Red River history was minimal. I’ve since learned I may have lived near relatives in several small railway towns, Plains or Swampy Cree families with names such as Budd, Erasmus, Couture, and Kennedy.

Who was Catherine Kennedy Couture? The mystery of my great-grandmother’s life and death started my research, but soon the captivating stories of other 19th century Red River women drew me in. My question changed and grew: Why don’t we know more about First Nations women? Their work both pre- and post-European contact has been immense, yet they’re either ignored or dismissed. Then it became a challenge to find written accounts of their lives – histories of the day weren’t written by Indigenous people – and when I did find traces, it was clear these women struggled with the same threat of erasure we see today.

How long? Decades! In some ways, though, that’s true. I was raised in settler society, shot through with every assumption and stereotype and misinformation about Indigenous people in this country you can imagine. I’ve had a lot of unlearning to do, a lot of listening, reading, thinking, staying quiet, staying open.

Finding the structure of the book took a couple of years -- the fragmented portraits of my grandmothers and their contemporaries suggested a collage, but my search for Catherine and my travels to the site of the fire wanted a narrative through line. The challenge was to give the reader the stories of these women generation by generation in snippets, anecdotes and descriptions I’d found in fur trader and clergy journals, newspaper articles, one-hundred-year-old manuscripts, and any historical accounts of Red River life. As manuscripts go, it was a high wire act.

And I wanted to stretch my writing too. Before the rise of the Métis nation in the last half of the 19th century, most people of mixed heritage were labeled ‘half-breed,’ including at least two of my grandmothers. Without planning to, I found myself crossing conventional genres lines – from lyric poetry to prose poetry to narrative nonfiction and back again, and conceptually, that fit. The writing as a whole mirrors the in-betweenness of the worlds these women navigated.

The research almost overtook the manuscript itself. I am in awe of these women, and I’m still delving into the research, as well as immersing myself in the work of contemporary Indigenous women writers.

In a perfect world, I’m looking out on water or the open prairie, the coffee pot is full, and I’m stoking a wood fire. Outside, I can walk along the shore or into the woods. My head is clearest in the morning, but I’ve never braved the 4 a.m. shift. In reality, I can probably write anywhere, especially if I have an unlined journal and a fine tip black pen.

I walk. I take a break, sometimes for a day or two. Or a week. Writing problems often resolve themselves when I’m away from the page doing everyday things. Writing is hard fun, and the difficulties are challenges I like to have. Given the state of the world and the pain and violence others struggle with, having writers’ woes is a luxury.

Any work that opens me up, is generous, provocative, playful or frays the edges of the given. Too many individual works to single out. I often seek out anthologies of prose and poetry – I like the mix of voices and approaches. Jean Rhys says our work is like rivers that flow into a larger body of water. “I don’t matter,” she says. “The lake matters.”

I’m in post-book limbo, sitting with scattered files of essays and poems and hoping they start talking with each other. I’m not rushing the process. Writing and researching Following the River was the most intensive and immersive project I’ve undertaken in my life. I’m aching to return to the charged stillness of writing poetry, but I’m still inside the lives of Red River women, digging into the past for their lessons.

Lorri Neilsen Glenn is a poet, essayist, teacher, researcher and editor. Among her titles are the popular anthology Untying the Apron: Daughters Remember Mothers of the 1950s; Threading Light: Explorations in Poetry and Loss, a bricolage work of lyric essays; and the poetry collection Lost Gospels. Her award-winning poetry and essays have been widely anthologized. She is Professor Emerita at Mount Saint Vincent University and a mentor in the University of King’s College MFA program in creative nonfiction.

Lorri Neilsen Glenn first discovered her great-grandmother’s tragic death in a passing comment from an aunt. Startled, she began to search out the history of her family, to understand the life of this woman she knew nothing about. Along the way Neilsen Glenn works to unravel the issues of racism, sexism and colonial nation building that haunt us still. In elegant prose and poetry she has created a story of pieces, bringing to life what she could find in newspaper reports and museums. Through these fragments and portraits she gives the reader a glimpse of the lives lived by her ancestors and by women like them. Following the River is a lyric reflection on women that have been erased from our history and what that means for today.