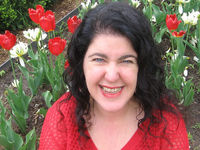 In her novel, Clara Awake (Inanna Publications), Melinda Vandenbeld Giles takes her background as an anthropologist as a foundation, then lets her imagination run wild. Delving into big questions of good and evil, religion, and obsession, Clara Awake tells the story of a PhD student in anthropology who begins having strange, haunting dreams while researching the Odùn religion (a fictional faith Vandenbeld Giles created for the novel). Shaking off her worry about the dreams, Clara travels to Brazil to do field work and finds herself thrust into a dark but irresistible intersection of political corruption, black magic, and erotic attraction.

Today we're excited to welcome Melinda to Open Book, to speak with us about Clara Awake and her writing process. She tells us about the process of creating a fictional religion, the hot summer that kickstarted this book, and how her next book will continue her focus on women's lives and adventures.

Tell us a little about Odún, the religion Clara is researching. Why did you want to explore Clara's fascination with Odún?

Odún is based on an Afro-Brazilian religion called Candomblé. I’ve always been fascinated by what motivates people and why people believe what they do. This is what inspired me to become an anthropologist. I was captivated by Candomblé when I travelled to South America as a university student. I loved the female energy of all these fantastic strong goddesses and the concept of a universal soul uniting humanity. But I was also intrigued by the history and the political underpinnings of this powerful belief system, particularly the ways in which it provided strength for marginalized populations but also how the religion has been repressed in different periods of Brazilian history. I wanted to further explore the multifaceted ways in which women in particular find strength in community and resistance to oppressive forces through a belief system that is all about the power of female energy.

The novel explores myth and magic, including the idea of a female-driven energy, a kind of goddess force, in opposition to darker magic. How did you see the two forces and what they represent? What drew you to exploring the tension between the two?

I’ve always been interested in the complexity of human motivation and the concepts of “good” and “evil” often simplified for dramatic purposes. As a feminist, I am particularly drawn to the inherent power of strong female energy. In particular, I wanted to explore the concept of love not only as a powerful emotional force, but also as a powerful energy force that can be transformative. In my academic research I look at how neoliberal policies have detrimentally affected women and mothers globally. Within such dark spaces of negativity and oppression, we need some sort of message of hope. When I think of dark or “evil” forces, in many ways this is exemplified by repressive political and economic policies that prioritize profit and branding over actual substantive structural change. In many ways, the book is my message of hope that love and the forces of “good” can and do win out in the end.

What interested you about Brazil as a setting? And how did you conduct your research for this novel? Were you able to travel to the settings you explored?

With my childhood neighbour on one side being from Brazil and another neighbour across the street being from Chile, I have memories of many lively kitchen conversations about South America, Pinochet’s Chile, and the Amazon rainforest. This definitely influenced my future interests and when the opportunity to travel for four months to South America as a university student working for CIDA (Canadian International Development Agency) came up, I was eager to go. I ended up travelling by ferry from Montevideo, Uruguay, to Buenos Aires, Argentina, then taking a bus up through the Andes and Chile into Peru and ending up by crossing the Bolivian border into Brazil where I spent most of my time in Rio de Janeiro. I was absolutely fascinated by Brazil my whole life so actually being there had been so exciting. I remember hearing the drums of Candomblé and seeing the women wearing their white scarves selling sweets on the street and finding the little Macumba shops in back alleyways and asking what this was all about. It influenced my academic work, inspiring me to switch my major from English to Social Anthropology with a Latin American Studies minor. My honour’s undergraduate thesis and later my Master’s research all focused on Candomblé.

Given that I started writing this book in my grad residence at York University when I should have been finishing my Master’s thesis, it’s hard to say what a typical day looked like. It was such a hot summer and the campus had been deserted. I would wake up late and spend early afternoons listening to Candomblé ritual drumming music in the library then walk home and write another section of my thesis before needing to get away from the academic theorizing by finding a creative outlet at night through writing this book. At the time, I had no fixed schedule so I could literally write almost all night and then sleep half the day. Now that I have an 11-year-old-daughter, my writing schedule has completely changed! I still like to write at night, though, usually from when my daughter goes to bed around 9 until midnight or so. But no more all nighters for me!

What was the revision process like for Clara Awake? What was the timeline from first inspiration to final draft?

Although I wrote the first draft while completing my MA at York, it took many more revisions before publication. I returned to this book when I was working as a flight attendant and living in Vancouver. I remember spending hours at the UBC library researching Brazilian history and wanting to add the political context. Life again became busy and I wasn’t able to return to the book until years later when I returned to academia to pursue my PhD at the U of T in anthropology. I went back and rewrote the entire book adding in the dreams and history/politics three summers ago and then submitted it to Inanna. The process of working with Inanna’s publisher and editor, Luciana Ricciutelli, has been truly rewarding and I can honestly say that bringing Clara Awake from inspiration to publication has definitely been an incredible journey.

I’m currently writing my PhD dissertation, but something about academic writing seems to inspire my creative side so I am also working on a novel called Default. In this book I continue my exploration of women’s lives and themes of destiny and morality. It’s 2007 and Celia is visiting her sister, who is working for the UN in Prishtina, Kosovo, when she gets a phone call from her husband in Toronto, Canada, that her 15-month-old daughter is in intensive care after having a febrile seizure. While this is the starting point for the book, the novel spans over 30 years, exploring the intensity of motherhood through postpartum depression, the frailty of humanity in a post-war zone, the resiliency and strength in sisterhood, and the incredible difficulty in having to make impossible decisions that affect our entire futures. Of course, I left the ending of Clara Awake open because there is still much more to Clara’s story and I definitely plan to return to it.

Melinda Vandenbeld Giles is a PhD candidate at the University of Toronto and lecturer in Social Anthropology and Women’s, Gender and Sexuality Studies. She has published an edited collection titled Mothering in the Age of Neoliberalism (2014), and will be co-editing a Companion to Motherhood forthcoming in 2018. Clara Awake, inspired by her graduate research on African-Brazilian religions, is her debut novel.

Ever since anthropology PhD student Clara Lemont started researching the African-Brazilian religion of Odùn, her days and nights became filled with dreams of swirling figures of white, drum beats and yellow eyes haunting her in the darkness.  When Clara travels to Brazil to do fieldwork, she quickly finds herself immersed in a world of dark intrigue, political corruption, black magic and desire. Travelling across time and space to be reunited with her eternal lover, history, politics and sex all collide as the female energy of the goddesses and the transformative power of love combat the dark forces of evil. An evocative and sweeping tale of myth and magic, from a seventeenth-century escaped slave community in northern Brazil to 1930s Rio de Janeiro, Clara Awake will take you on a sensual journey of intense passion, intrigue and love.