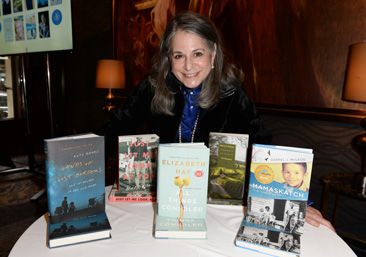 This morning, jurors Camilla Gibb and Roy MacGregor announced the five finalists for the 2019 RBC Taylor Prize for Nonfiction, one of the most influential literary prizes in the country. A third juror, Beverley McLachlin (a Chief Justice of Canada), was unable to attend.

Prize founder Noreen Taylor addressed the audience gathered at Toronto's Kind Edward Hotel to share her trademark enthusiasm for the list, noting that reading the entire longlist had been a life changing experience for her.

The five finalists were announced, with a strong showing for memoir (clocking in at four out of five titles), and an excellent year for Penguin Random House, who published three out of five titles. Independent houses Porcupine's Quill and Douglas & McIntyre rounded out the list.

Shortlist for the 2019 RBC Taylor Prize for Nonfiction:

The winner will be announced at a luncheon on March 4. Each shortlisted author will receive $5,000, with the winner receiving an additional $25,000. The winner will also be invited to select an emerging author they admire to receive the $10,000 RBC Taylor Prize Emerging Writers Award. With an eye towards developing the nonfiction authors of the future, RBC and the Taylor Prize Foundation will also once again present their Emergent Author Mentorship Program, which pairs the shortlisted authors with a writer early in their career for professional development and in-depth feedback on their work.

Nonfiction fans have two chances to see the shortlisted authors in person: The Toronto International Festival of Authors will be hosting a free round table event with all five finalists, hosted by Toronto Star Books Editor Deborah Dundas, on February 28. As well, Ben McNally Books will host an Authors Brunch on March 3 (for tickets, please contact Ben McNally Books at (416) 361-0032 or visit benmcnallybooks.com).