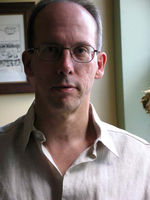 Sometimes deft simplicity is where we find the greatest impact when it comes to writing. That proves true in the title of Mike Barnes' Be With: Letters to a Caregiver (Biblioasis). The title Be With captures something seemingly simple but deeply complex in execution: the need and impact of giving your time and yourself as a caregiver.

The short, powerful book takes the form of letters to a long-term dementia caregiver, offering clarity, solace, and solidarity for an emotional, legal, and domestic task that more and more people are shouldering as our population ages. Barnes knows what he is talking about; he draws on years of experience caring for his mother Mary from the early to the late stages of Alzheimer’s.

The short, digestible letters are written with a realistic understanding of busy, exhausted caregivers' time and energy and stay true to the book's title, emphasizing the deceptively simple need to just "be with" - to witness, see, and accept. Poignant but never heavy-handed, it's a relevant and empathetic book that meets caregivers where they are.

We're excited to welcome Mike to Open Book today to talk about his title and the power of titles in general as part of our Entitled series. He tells us about an abandoned title that became "a gruesome distraction", his favourite titles of his own and others' work, and his next writing project, a "crazy-patchwork sinister thing that runs amok" and which sounds fascinating.

I find short works—poems, stories, essays—easy and fun to title; books have often been more of a struggle for me. I sometimes cramp up trying to find something that can wrap around the whole, uniting its parts. This time, though, the title Be With came easily and never had serious competition. “Be with” refers to a concept central to the book, introduced early and repeated several times. So it was a natural and straightforward choice, in the sense that it fit the book’s meaning. I wondered, though, if it wasn’t a little lacklustre—not unusual or arresting enough to stand out. I anticipated maybe being asked to find something grabbier. So I was surprised when my publisher, Dan Wells, expressed love for the title right off, a sentiment that was echoed by a couple of other early readers. Maybe I’d underestimated my own title. I wondered if I’d been wrong about other titles, too—misperceiving how others might react to them.

My novel The Adjustment League was originally entitled The Boiled Child, which I loved: yes, it was horribly black, but it fit a blackness in the story and referred to a defining trauma in the protagonist’s past—and it was certainly memorable! But when first readers saw it, they recoiled: No, no... too terrible... far better to call it The Adjustment League, a phrase that ran all through the novel, used originally by a group of psychiatric patients to describe the rough justice—“adjustments”—they meted out to abusers of authority. That made the perfect title! I wasn’t so sure. Wasn’t there a comic, or a movie—or both—called The Adjustment League? Or something close to that? Who cares? It’s perfect. I came around slowly, clinging to my rejected scalded child by putting it on the title page as “File 1: The Boiled Child.” Only later did I see that The Adjustment League captured the real essence of the story, while The Boiled Child would have been a gruesome distraction. So that was an unexpected place to find a title: in others’ visceral dislike of the title I was originally set on.

Most important is to speak to an essence of the book—something fundamental to its tone and meaning that acquires even more resonance after the book has been read. The other considerations that are often put first—catchiness, wit, vividness of sound or image—are great extras if you can get them, but secondary to that congruence of meaning.

I’ve really liked a lot of the zany-but-apt titles I’ve come up with for the shorter pieces: I could name a lot of them. But, since titles for longer works have been my main challenge, I’d like to nominate a couple of them. Asylum Walk is the title of a long visual-text essay I wrote, which was published in The New Quarterly and which won the Edna Staebler Prize for nonfiction. It paired 63 photos taken on a walk through an old asylum, where as a young man I was almost sent for long-term keeping, with short writings, varied in style and subject, inspired by each photo. I like the title Asylum Walk because it’s literally what I did—strolled through the spooky grounds for just over an hour, snapping pictures of the sad and decaying buildings—and it also refers to the sanctuary—the asylum—I was trying to find, and ultimately did find, by returning to consider that part of my life. Braille Rainbow, the title of a forthcoming book of poems, is also one I really like: to me, it’s evocative and mysterious, with a beautifully open and liquid sound when you say it.

That’s hard; there are so many great ones. Even just looking around my bookshelves in this apartment, they leap out. Sorry, but I’m going to have to name a few: Céline’s Journey to the End of the Night is perfect. Cormac McCarthy: Blood Meridian. Both so arresting, and yet they only gain in resonance each time you read the book. John Fante: Ask the Dust. Burroughs: Naked Lunch. Bukowski: Burning in Water, Drowning in Flame (or: The Days Run Away Like Wild Horses Over the Hills—he was terrific at titles when he tried even a little). A wacky title can seem fey, or irrelevant, or just silly and desperate to get your attention, but Murakami, who doesn’t always avoid those pitfalls, gets it just right with The Wind-Up Bird Chronicle—so enticingly mysterious. There are lots of other standouts; when you start looking around at titles, you realize many, even most, authors are pretty good at them. Even plain ones can be very sound, and  refreshing, like tap water when you’ve had too many sugary or caffeinated drinks.

I’ve never thought about it before, but I don’t think I’m too keen on them. They run the risk of seeming precious, portentous. Or pinched—usually I’d rather have the author spend at least a couple of words.

I’ve gone back to a huge futuristic novel I got hundreds of pages into several years ago and then had to abandon for reasons that had nothing to do with the project itself. I started pulling it out of boxes recently and got intrigued by it again. It’s a huge sprawling multi-part many-voiced work-in-progress about a giant world-hospital created to facilitate global consumerism based on a medical model of sickness and perpetual treatment, created by a confluence of pharmacology and physical engineering and bio-implants and mass consensual hallucination... it’s a crazy-patchwork sinister thing that runs amok in every kind of direction, and I don’t know if I’ll ever get near to finishing it, but I love getting lost in its labyrinths.

Mike Barnes, a dual Canadian-American citizen, has published nine previous books across a range of genres: poetry, short fiction, novels, and memoir. His poems have appeared in numerous anthologies, and his stories have appeared twice in Best Canadian Stories and three times in The Journey Prize Anthology. He has won a National Magazine Award Silver Medal in the short story category. His collection of poems, Calm Jazz Sea, was shortlisted for the Gerald Lampert Memorial Award; and Aquarium, his first collection of stories, won the Danuta Gleed Award. He has also published many essays, one of which, the photo-text collage “Asylum Walk”, won the Edna Staebler Award. His last book, the neo-noir thriller The Adjustment League was named by Maclean’s Magazine one of the ten best books of the year. He works as a private English tutor and lives in Toronto.

Be With: Letters to a Caregiver

Be With: Letters to a Caregiver is what its straightforward title promises: 4 letters to a long-term dementia caregiver, drawing on Barne’s own years of caring for his mother Mary through the stages of moderate, severe, very severe, and late stage Alzheimer’s. The book is short: the letters range from 2,500 to 7,000 words, and are written in short takes of a few lines or paragraphs. It is meant to be a dippable source of clarity and solace, while also telling a compelling personal story. It is designed for harried caregivers who might have time for a 2-line section, or a 20-line, or one letter, or the whole thing. Be With balances candour about the devastations of dementia with insights into its paradoxical and indeed often uncanny enhancements of life, the ways in which it sometimes calls forth capacities long buried by the defenses of full cognition. In the words of the book itself: “All people with dementia, and some of them strikingly, show depths of sensitive awareness, resilience rising to heroism, and a capacity for joyful relatedness that is almost totally missing from public discussions of their condition.” The two-word title encapsulates the book’s core emphasis on fellowship and accurate witness: to simply be with who, and what, is actually before us.