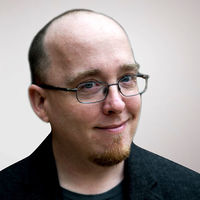 Brian Wilkinson decided to start his publishing life with a bang -- this fall, he's got not one, but two books out with Blue Moon Publishers as a double debut: Paramnesia and Battledoors: The Golden Slate. Both titles begin YA fantasy series for Wilkinson and were inspired by his own children.

Paramnesia kicks off the "Deadish Chronicles Series" and tells the story of Nora, who is able to see the dead after escaping half-way through an attack by a supernatural creature that killed her boyfriend. Everyone around her thinks she's losing her mind, leaving Nora with no one but her dead friends to help her when the creatures return to settle the score. Battledoors' protagonist is Owen, who is pulled, along with his friends, into a world parallel to ours. Trapped in a bizarro version of Toronto, Owen has to use a device called the Battledoor, which gives him a series of choices, to get home. The choices are never as simple as they seem though, and Owen is pursued by the dark ruler of the world he's fallen into.

Both books are totally creative spins on compelling young hero stories, and show great promise for future instalments in their series. It's no wonder Wilkinson has earned praised from acclaimed Marvel Comics author Brian Michael Bendis (as well as even getting to write for Marvel himself with the publication of X-Men: The 198 Files, which he co-wrote).

We're excited to announce that Brian is our November 2018 writer-in-residence and will bring his fantastic storytelling skills to Open Book for the whole of the month. You can get to know Brian here today through his responses to our W.A.R. (writers as readers) series, where he tells us about swimming in a plethora of books Scrooge McDuck-style, remembers the book that hit a little too close to home for him as a dad and caused some tears, and gives us a fabulous list of YA must-reads.

And stay tuned to our WIR page to hear more from Brian throughout November!

The W.A.R. Series: Writers as Readers, with Brian Wilkinson

It’s really lucky that I love to read given what I do for a living. For the past twelve or so years I’ve been an English teacher and a librarian for a high school. I’m in a unique position where I not only get to read books I love from authors I revere, but I’m constantly exposed to new authors and a variety of genres. Some days I feel like Scrooge McDuck from the old DuckTales cartoon who had his own vault filled with gold. He never spent it and in the end couldn’t figure out anything better to do with it than dive in and swim around.

While I do better than Scrooge some days it does feel like I’m swimming in books (I currently have more than 18 digital books in my reading queue alone). As librarian, I do my best to read as many as I can of the books that I bring in and along the way I’ve been surprised by some of the books that I’ve found. There is a lot more quality out there than most people realize, and a huge chunk of it comes from the young adult category. You might find that the list below is a bit biased as a result, but honestly that shouldn’t matter. Good reading is good reading, in my opinion.

I had to really search my brain, but in the end I came up with Judy Blume’s Tales of a Fourth Grade Nothing. It follows the antics of 9 year old Farley Drexel ‘Fudge’ Hatcher and the chaos that he unleashes. I remember moments of hilarity that especially appeal to young children that adults often don’t get. I mean, the kid swallowed a goldfish and had to have it removed at the hospital. That’s funny. I took one out of a fishbowl as a kid and played with it on the counter. Like Fudge, it didn’t end particularly well.

The Road by Cormac McCarthy. It’s a great book but the end of it haunts me. As a father myself, the thought of leaving my kids behind hurts deeply and is a little too close to home. Man, that whole story left me feeling a little broken. Incredible writing!

I don’t know why, but I’m always putting pressure on myself to tackle books like Moby Dick or War and Peace. Why do I feel like I should read them? Maybe it’s because I was an English major. They kind of feel like required reading, but I just can’t bring myself to do it. Oh well. Call me Ishmael.

I just finished reading John Scalzi’s Redshirts. I’m a huge sci-fi/Star Trek fan and loved the mash up of humour and absurdity that sometimes comes with science fiction. The story was great, the pacing wonderful, and the Hugo Award for Best Novel it won in 2013 was totally deserved.

This is just going to be a list of great YA titles that people need to read. Each year, I shove copies of these books into the hands of students who might otherwise think the only books available to them are the ones that have been made into movies.

Dooley Takes the Fall by Nora McClintock. A story about a possibly reformed bully who just happens to wind up standing next to the dead body of a kid he used to torment. Great mystery/detective story.

Little Brother by Cory Doctorow. If there was ever an ambassador for the internet, free speech, and the value of sharing information, it’s Doctorow. This story finds kids accused of terrorism in a world where just about everything they do online is monitored and scrutinized. The scary part is that most of the info Doctorow gives is real or likely to come down the pipeline.

Swim the Fly/Beat the Band/Call the Shots by Don Calame. These are just funny. The misadventures of three friends struggling to figure out life, high school, and things like music and movies with no experience whatsoever. And, as I tell my students, things often go horribly wrong. Great stuff!

And now some more random titles: Tunnels by Roderick Gordon and Brian Williams, Gone by Michael Grant, The Monkeyface Chronicles by Richard Scarsbrook, Fat Kid Rules the World by K.L. Going, The Hate U Give by Angie Thomas, Eleanor & Park by Rainbow Rowell, The Walking Dead by Robert Kirkman, Ms. Marvel by G. Willow Wilson, any and all Ultimate Spider-Man by Brian Michael Bendis… I could go on for hours!

There are a few series that are incredible and demand reading. Harry Potter for obvious reasons... Lord of the Rings in all of its epic glory... Game of Thrones or the Wheel of Time if you have the patience to track all of the narrative paths. There’s also something really special about Dan Simmons and his Hyperion series. I love all of these series and more like them because the characters follow a long and winding path and we are lucky enough to get to travel with them as they age and mature. The best kind of series you can find, however, is one that’s only just beginning. There’s something much more sweet and rewarding about having to wait for the next book to come out (even if it can take years). As a reader, you really earn the story, if that makes sense. I’ll elaborate on this more in a future post, I think!

Brian Wilkinson attempts to juggle multiple careers as an author, high school teacher, and librarian. He currently lives in East York, Ontario, with his wife and two children, who served as the inspiration for the main characters in his first novels, Battledoors and Paramnesia. Brian was born and raised in Guelph, Ontario, where he attended the University of Guelph and received a BA in English Literature. He continued his writing career by earning a diploma in Journalism from Humber College, and applied those skills by working as a reporter for the Toronto Sun, the Toronto Star, and EYE Weekly, as well as serving as a co-publisher for the comic news site ComiXfan, and an editor for Humber Etcetera, where he won a Columbia Scholastic writing award for first-person column-writing. He was even lucky enough to realize a lifelong dream by writing for Marvel Comics when he co-wrote X-Men: The 198 Files.

Battledoors: The Golden Slate follows the adventures of Owen Thomas and his companions as they find themselves magically pulled from our world into one parallel to it. In this twisted version of Toronto, Owen must use the Battledoor on his waist, the Golden Slate itself, to progress through a story that he now finds himself the Protagonist of before he and his companion are able to return home. At each new junction in the story, the Battledoor presents him with a series of choices that will dictate the paths he is able to take to reach the end. With each choice, however, comes a consequence. Some paths might look safer than others, but each presents a unique challenge that the group will have to overcome in order to progress.

Each choice will result in a new adventure. Will Owen and his friends meet new allies, bizarre creatures, or deadly enemies? Will he be able to get far enough along in the story to find his way home, or will the next choice result in a fatal end? To succeed, Owen must find courage he never knew he had, explore the possibility of romance, and try to find a way to let go of his painful past and move on. Before he can make the final escape back home, however, Owen must also confront Vellum, the ultimate Antagonist and the dark ruler of this strange world, who wants to take control of the Battledoor for himself.