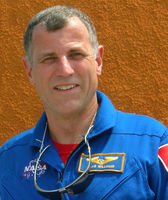 Countless kids dream of becoming astronauts and exploring the galaxy. But for just a few, that dream becomes a reality. Those lucky and elite few include Dr. Dave Williams, an astronaut who set the record for the highest number of spacewalks performed by a Canadian in a single mission, as well as the Canadian record for the most time spent outside the shuttle. His fascinating life has also included deep sea exploration, working in Aquarius, the world's only underwater research laboratory.

He and his co-author, children's television executive Loredana Cunti, have created a kid-friendly book about how to pursue dreams as big as the ones Dr. Dave had. Illustrated by Theo Krynauw, Go for Liftoff: How to Train Like an Astronaut (Annick Press) is a charming and age appropriate look at how to work as hard as an astronaut and maybe even someday become one.

We're pleased to welcome Dr. Dave Williams and Loredana Cunti to Open Book to speak with us about Go for Liftoff. Today they tells us about writing as a team, the wildest experiences from Dr. Dave's astronaut training, and what kids can learn from Go for Liftoff about success, failure, and resilience.

What motivated you to write Go for Liftoff? What do you think it is about a career as an astronaut that appeals to so many young readers?

Go for Liftoff is the second in a series of books for young readers that Loredana and I are working on. We wanted to create books that would captivate the readers’ imagination and stimulate their curiosity to ask more science-based questions about how humans live and work in space. Many young readers are inherently curious about space and wonder how to become an astronaut and what astronauts do when they train for and participate in space missions. Perhaps there’s a desire to explore in each of us,that for young readers is the appeal of space, the undersea world and far away places.

The lessons in Go for Liftoff apply to a lot of things apart from astronaut training. What skills or strategies did you hope your readers would take away from the book?

The lessons shared in Go for Liftoff come from the life experiences that we have had in our careers. It takes a tremendous commitment to get the necessary background to apply to be an astronaut. One of the critical life lessons we included in the book focuses on failure and the importance of resilience. Failure is a natural consequence of learning and trying to do things that are difficult. Sometimes you succeed and sometimes you don’t. It’s what you do when you don’t succeed that determines if you will ultimately succeed. Simply failing at something does not mean a person is a failure; it is an opportunity to try a different approach and try again. Perhaps some of the strategies we’ve included in the book will help readers achieve their goals whether space related or not.

Of all the amazing experiences you draw on for the book, which was the most surprising or intense for you at the time?

The breadth of material that I learned as an astronaut was a surprise even though I anticipated the need to learn a lot of new material. One of the common features of all astronauts is a love of learning and learning new skills and knowledge. The most intense moments in training come in the simulators and the underwater spacewalk training. Countless hours are spent learning how to operate the complex onboard systems and perform intricate robotic and spacewalking tasks. The more intense moments occur training for those off-nominal moments, the unexpected situations where equipment fails or things don’t go as planned. Those are the training opportunities that really get you ready for a mission. In the simulators, we train like we fly and we fly like we train – focused, dedicated and committed to achieving the mission objectives.

How did the writing process work between the two of you when creating the book?

This is our second book together and we’ve developed a very effective strategy of leveraging each other’s strengths and writing styles. It starts with conversation and perhaps a few coffees, to build on the idea for the book. We have a number of ideas about different books for young readers that we put together in a sequence. In writing each book we then build on the idea of incorporating various aspects of science, technology, engineering, arts and math in a way that would captivate the interest of young readers. Once the writing starts, it goes back and forth between the two of us with repeated edits between ourselves and the editing team at Annick Press. The final result is a team effort of a group passionate about providing young readers with great material to read.

What are one or two of the books that inspired you as a child, the way Go for Liftoff inspires young readers now?

I really liked adventure books as a child. One of my favourites was The Adventures of Tom Sawyer by Mark Twain; others included all of Jules Verne’s books. The articles on space and undersea in National Geographic in the 1960s provided a huge source of inspiration for me as they shared the experiences of current day explorers pushing the boundaries of the two final frontiers. Jacques Cousteau’s 1953 book The Silent World: A Story of Undersea Discovery and Adventure is a classic. I still have my original copy and reading it today is as exciting as it was back then but it also reminds me of the countless hours that I spent as a child reading about exploration and hoping that I, too, would have the privilege of becoming an exploration scientist.

Loredana and I have a number of ideas for other books and projects. Some we are working on individually and some we are collaborating on. We’re thrilled with the success of our first book To Burp or Not to Burp and are hoping that we can continue to create books that will inspire young readers to think about where their passions and talents might take them as they embark on the pursuit of their dreams.

Dr. Dave Williams completed a residency in family practice in the Faculty of Medicine, University of Ottawa and a emergency medicine at the University of Toronto, followed by a fellowship in emergency medicine from the Royal College of Physicians and Surgeons of Canada. In 1998, he participated in his first spaceflight, called Neurolab, aboard Space Shuttle Columbia. In October 2001, he became an aquanaut through his participation in the joint NASA-NOAA (National Oceanic and Atmospheric Administration) undersea research mission, held in Aquarius, the world's only underwater research laboratory. In 2006, Dave Williams was assigned as the crew commander of the NEEMO-9 undersea research mission. A year later, he flew on his second spaceflight STS-118 on the Space Shuttle Endeavour. After retiring from the space program in 2008, Dr. Williams returned to healthcare. He is currently President and CEO of Southlake Regional Health Centre in Newmarket, Ontario. Married, with two children, Dr. Williams enjoys flying, scuba diving, hiking, sailing, kayaking, canoeing, and downhill and cross-country skiing.

Loredana Cunti was formerly the Senior Vice-President of Children’s Programming at Universal Pictures in London. She has developed a number of book-based characters for television including Geronimo Stilton, Pink Panther, and most recently George Greenby by Stephen and Lucy Hawking. She is passionate about sharing stories of culture and family through food and loves pop music, folk and rap music, and learning a few words in any language she can. She plans to keep writing as long as the little characters in her brain want her to tell their stories.

Go for Liftoff! How to Train like an Astronaut

Find out what it takes to become an astronaut—from someone who knows!

How many kids dream of becoming an astronaut one day? Wouldn’t it be great to float in space and do neat experiments? But before all the “fun” begins, it takes an incredible amount of hard work to prepare for the ride of a lifetime.

Before they are sent to space, astronauts have to go through spacecraft systems training, wilderness training, underwater training, roller coaster–like flight training, and teamwork training, not to mention science, technology, medical, engineering, and math training. Training for flight also depends on being prepared physically, mentally, and emotionally, having the right attitude, and learning to deal with problems calmly. Dr. Dave speaks from experience when he describes what it’s like to live underwater for weeks at a time, experience free-floating in micro-gravity in the “Vomit Comet,” and eat bugs during wilderness training. With its firsthand photos and amusing illustrations, Go for Liftoff! is the go-to book for aspiring astronauts.