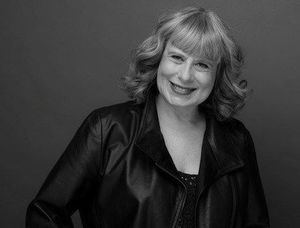 Lesley Krueger's sixth book has a very personal connection - not just because of her deep interest in the fascinating Victorian artist Richard Dadd, the subject of her new novel Mad Richard (ECW Press), but because Krueger just happens to be a fifth cousin of Dadd.

The novel follows Dadd's spectacular transition from the most promising and beloved artist of his generation to a man imprisoned for murder and considered criminally insane. He develops an unexpected friendship with none other than Charlotte Brontë, and Krueger's portrait of the two artists is both a deeply absorbing story and a brilliant examination of art, fame, and inspiration.

We're excited to announce that Lesley Krueger is our June 2017 writer-in-residence at Open Book. For those of you who don't know her already, you can get to know her today in our discussion about Mad Richard. Lesley tells us about the family papers that inspired her project, the insular nature of the artistic community in Victorian England, and what it was like to write a figure as beloved and well-known as Brontë.

What drew you to Richard Dadd as a subject? Where did you first come across the story of his life?

Richard Dadd is a family connection of my husband’s. They’re something like first cousins five times removed, meaning I’d heard about Richard for years. I also knew there were family papers that his biographers weren’t aware of, which is always tantalizing. And frankly, it’s such a great story. The most promising young artist of his generation goes mad (as they said then) and commits a murder that gets him locked up in Bedlam, where he starts painting masterpieces. Once I read a family letter referring to “our poor cousin Richard,” I caught a glimpse of the real young man and his devastated family. And got hooked.

The relationship between Dadd and Charlotte Brontë is at the core of the novel. How would you describe the relationship and how it impacts each of their lives?

Everyone knew everyone else in the artistic community of Victorian England, even if they only met briefly. Charlotte Brontë, Richard Dadd, Charles Dickens, Elizabeth Gaskell—they were all part of an extraordinary moment in history (and are all characters in my novel). Records show they supported one other as fiercely as they fought, meanwhile asking questions about the role of the artist that we still ask today.

When I read a line in one of Charlotte Brontë’s letters, “Tomorrow I shall visit Bedlam,” I imagined a meeting between Charlotte and Richard that might provide a doorway into two very different lives and allow me to explore what it means to be an artist. The two meet only once in my novel, but the artistic questions they debate during that one meeting devil them throughout the narrative.

What were some of the pleasures and challenges of writing a figure as well known and well loved as Brontë?

Everyone has their own version of a historical figure like Charlotte Brontë. Stands to reason, when everyone would have met a slightly different person in real life. We all show different sides of our personalities to different people. In reading her Collected Letters (all three volumes!) I developed a feeling for Charlotte Brontë as a very strong woman and a bit of a bitch (can I say that?) for all her famous shyness and anxieties. I liked her a lot, and felt a great deal of pleasure in her imagined company.

In writing about her, however, I faced the challenge of staying true to my own understanding of her personality. Other writers and biographers have created their own very different Charlottes, and I knew that if I let their versions compromise what I felt and intuited, “my” Charlotte wouldn’t be able to breathe on the page.

What was your research process like for Mad Richard? Are you someone who enjoys research for fiction or are you eager to get into the drafts themselves?

Along one wall of my study is a bookcase filled with genealogical binders compiled by my mother-in-law, Mary Knox, over thirty years. I started researching this novel by reading the family binders. From there, I went on to read a great many books and make several trips to England, visiting museums and archives, walking the moors near Haworth Parsonage and poking around the shipyards in Chatham where both Richard and Charles Dickens played as boys.

I love that stuff and could do it forever, but decided to start writing the novel before the research was anywhere near finished. That way I could focus on places the narrative led me, whether Manchester or the Mid-East, writing draft chapters and then pausing to find out more about the slums of London or Dickens’s pet raven, Grip. That left me with one more job: to forget most of the details so the narrative wouldn’t get mired in minutiae.

I write on a laptop in my home office. Above my desk is a truly dreadful oil painting by one of Richard Dadd’s first cousins, Henry Martin, who immigrated to Canada with his parents—and left the familial artistic talent behind. Also copies of Richard’s work and Charlotte’s books on a high shelf, along with period engravings that I had fun picking up in flea markets.

I usually arrive at my desk at about 9 a.m. and warm up by answering the inevitable emails, starting to write no later than 11 a.m. I envy friends who can put in a four-hour writing day and progress on their books, but I have to write all day to accomplish anything, meanwhile remembering to get up frequently and stretch. I start by rewriting what I’ve written earlier that week and try to move forward by three or four new pages a day. That’s the goal, anyhow.

I usually work on a couple of projects at once. Before, during and after writing Mad Richard, I have been working on a big thumping multi-generational novel that I swear I’ll finish soon. It’s about the rise and fall of a family, and tied up in questions of timing and time. The first generation is based on a real-life English army officer named Josias Tayler and his Portuguese wife, Maria, who were posted to Upper Canada during the War of 1812. They ended up settling here, and their daughter married one of Richard Dadd’s cousins. I’ve also started working on a murder mystery with a very unreliable detective that I’m writing both as a film script and as a novella. It’s fascinating to move between the two, and I’m finding that the process enriches both.

Lesley Krueger is a novelist and screenwriter. Richard Dadd’s first cousin-in-law five times removed (if she has the genealogy right), Lesley drew on family information unknown to biographers in writing Mad Richard. The author of six books, she lives with her husband in Toronto where she’s an avid member of a women’s hockey league and a writer-mentor at the Canadian Film Centre. Find her online at LesleyKrueger.com.

A riveting story of talent and the price it exacts, set in a richly imagined Victorian England

Called the most promising artist of his generation, handsome, modest, and affectionate, Richard Dadd rubbed shoulders with the great luminaries of the Victorian Age. He grew up along the Medway with Charles Dickens and studied at the Royal Academy Schools under the brilliant and eccentric J.M.W. Turner.

Based on Dadd’s tragic true story, Mad Richard follows the young artist as he develops his craft, contemplates the nature of art and fame — as he watches Dickens navigate those tricky waters — and ultimately finds himself imprisoned in Bedlam for murder, committed as criminally insane.

In 1853, Charlotte Brontë — about to publish her third novel, suffering from unrequited love, and herself wrestling with questions about art and artists, class, obsession and romance — visits Richard at Bedlam and finds an unexpected kinship in his feverish mind and his haunting work.

Masterfully slipping through time and memory, Mad Richard maps the artistic temperaments of Charlotte and Richard, weaving their divergent lives together with their shared fears and follies, dreams, and crushing illusions.