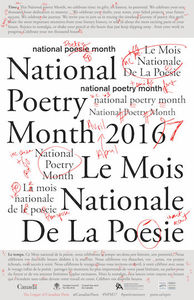 April is Poetry Month, and we're excited to celebrate 30 days of poems, poets, and more at Open Book. To kick things off, we asked some of our own favourite poets to share a favourite poem that touches on this year's theme of "time". The breadth and range represented in their responses is a perfect showcase of how varied and dynamic the genre is.

You can learn more about Poetry Month on the League of Canadian Poets website - from the celebration's beginnings in the US in 1996 to Poem in Your Pocket Day (mark your calendars for April 27!) and much more.

Leanne Dunic: "How to Cut a Cabbage" by Gillian Sze

I recommend a prose poem by Gillian Sze, from her book, Peeling Rambutan. The poem is called "How to Cut a Cabbage", and time is featured through recollections, and as something that can be saved.

The opening line is a favourite:

A cabbage in her dialect is called "wrapped-heart-vegetable." It draws me in, and I want to know how that dialect sounds.

I am a cabbage enthusiast. I also have a tattoo of a peony which is often mistaken for a cabbage, so I particularly love the way a cabbage is referred to as a bloom in this poem. And the ending packs some punch.

This poem is from Shaughnessy's book Our Andromeda. Here is my favourite stanza in the poem:

For we are a we, aren't we? We split
a self in such a way that there isn't
enough for either of us.

I love this poem because it delves into the grisly and raw weeks after a baby is born, during night feeds when the speaker is up at all hours and time has become both all-encompassing and irrelevant.

Adrienne Gruber is the author of Buoyancy Control (BookThug)

James Lindsay: "Farm Woman and Her Children" by Adam Kirsch

His confidence that she'll protect him from
The monster he is going to become.

Kirsch depicts a baby boy from an August Sander’s photograph (taken around 1920-25 in Germany, between the wars) as still completely dependant on his mother and both of them blissfully unaware that in the future he will join the Nazis. But this can also be read as the dependence all of us as infants have on our mothers, and the confidence contained in that dependence that our mothers could protect us from anything. Even the “monsters” we become as adults.

James Lindsay is the author of Our Inland Sea (Wolsak & Wynn)

Carolyn Smart: You're a Big Girl Now by Bob Dylan

When I think about Time, I think of two marvellous poems by Brenda Shaughnessy (I Have a Time Machine) and Brenda Hillman, (Time Problem), but my mind also goes back to Bob Dylan (yes, the Laureate himself) and his apt line: “Time is a jet plane, it moves too fast” from the lyrics of You’re A Big Girl Now, a song that has stayed with me all my life. As time moves faster and faster with age, to think back on the things I loved when young slows things down to a manageable pace, and I am grateful for the poems and the lyrics that have made my life a richer place. This particular quote may seem simplistic, but it’s so damn true.

Carolyn Smart is the author of Careen (Brick Books)

Linton describes historic racial tensions in the UK during the 70's and subsequent violence those tensions provoked. My dad had this dub poem on vinyl. Listening to it was the first time that I realized that poetry could be more than just nature, or military propaganda. Here was a poet documenting an explosion that resulted from cultural repression. Unfortunately, it's still timely.

Night number one was in Brixton
Sofrano B sound system
I was a-beatin' up the riddim with a fire
I'm comin' down his reggae reggae wire
It was a sound checkin' down your spinal column
A bad music tearin' up your flesh
And the rebels dem start a fighting
De youth dem just turn wild,
it's war amongs' the rebels ...

Dane Swan is the author of A Mingus Lullaby (Guernica Editions)