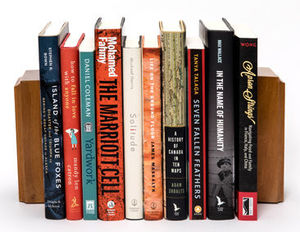 After a fiction-focused fall prize season, the focus is back on non-fiction with the announcement of the 2018 RBC Taylor Prize longlist.Notably, included on the list are two of the Weston Prize finalists - winner James Maskalyk and shortlisted writer Tanya Talaga. Apart from those two titles, there is no further overlap between the lists for the two biggest non-fiction prizes in the country. Penguin Random House scooped half of the ten longlist spots across their imprints, with independents presses Douglas & McIntyre, House of Anansi Press, Wolsak & Wynn, and Goose Lane (along with multinational Simon & Schuster) each boasting one title on the list.

The RBC Taylor Prize will be presented Monday, February 26, 2018, where the winner will take home both the prestige of the award and the $30,000 prize purse. Each finalist is awarded $5,000.This year's jury is comprised of Christine Elliott, Anne Giardini, and James Polk, who read 153 books submitted by 110 publishers.