Growing up in the Prairies, Bruce Buchanan was far from alone in his passion for sports of all kinds. But for all the Canadian kids who love their teams, not many go to make a job of it. Bruce, who carved out a career spanning more than three decades as a sportscaster, was a rare exception. In 1984, he became the youngest broadcaster in NHL history at just 23.

His memoir about his work, which included serving as the TV voice of the Edmonton Oilers during their Stanley Cup run in the 1980s, is There and Gone: The Fascinating Life of a Sports Broadcaster (Crossfield Publishing). It's a compelling read not only for sports fans, but for anyone with a dream they feel driven to follow.

We're excited to present an excerpt from There and Gone, courtesy of Crossfield Publishing. In this section, we hear about Bruce's first NHL broadcast, his experiences attending team practices, and the pressures of working live.

Excerpt from There and Gone by Bruce Buchanan: 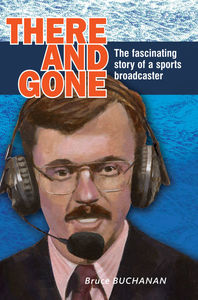 When ITV hired me in the summer of 1983, I was poised to become the youngest television play-by-play announcer in North America at the age of twenty-three. It’s an accomplishment that I’m still proud of to this day. In August of that year, I moved to Edmonton to get settled and prepare for my first NHL training camp. Considering the meteoric success of the Oilers that year, my timing couldn’t have been better.

I remember watching the powerful Oilers in practice during that first day at camp and waiting for General Manager and Head Coach Glen Sather to come off the ice so I could introduce myself to him. I might have been in my early twenties, but I probably looked about fifteen to him. The first thing he asked me is if I’d ever broadcast a hockey game before.

Sather took this opportunity to give me some friendly advice and it was an early indication of how he protected his talented squad.

“Keep your mouth shut for a few years,” he said. “You have to get to know the team so the players and I can trust you.”

Keeping quiet had never been my strong suit, but I dutifully fulfilled Glen’s expectation to attend every single Oilers practice. This wasn’t a chore for me, since I think it’s every hockey team announcer’s obligation to do so and it was a genuine treat to watch the Oilers go through their routine. They performed drills at an insanely high tempo and carried that pace over to their actual matches. Indeed, these pre-season games gave me a chance to audition for the real deal.

My first NHL broadcast was a game at Northlands Coliseum versus the Toronto Maple Leafs. Naturally, I was somewhat anxious before the game but, all things considered, not particularly nervous. After all, I’d been practicing my play-by-play skills for years. The most difficult thing to get used to in television is people talking in your headset while you’re trying to call the game.

My main producer during those first few years was John Shannon, who’s now a game analyst on Rogers Sportsnet. John could be intimidating, and he certainly wasn’t afraid to scream in your ear when he thought you made a mistake. Following the Leafs versus Oilers telecast, John and I sat down in the ITV boardroom to watch my first crack at TV play-by-play. In a hold-over from my radio days, I was being too descriptive and, as a result, I was slightly behind the play. Shannon was very demanding, but he taught me a great deal about hockey play-by-play on television.

ITV had one of the best mid-week production crews in the country. No matter what the job title, everyone took pride in their job and that was reflected on air. At one point the station was tasked with providing an auction idea for various social events. Since the television business always fascinated me, I proposed that the auction winner could spend one period in the production truck, one period in the studio with the host and one period with us in the broadcast booth. This glimpse “behind-the-scenes” was a unique opportunity for the fans and proved to be a consistently-popular auction item over the years.

It didn’t take me long to notice that every play-by-play commentator prepares for a game differently and we all had our own unique habits. For example, Oilers radio broadcaster Rod Phillips would get ready by reciting game lineups out loud while we were riding the team bus to the rink. Since TV viewers can see what’s happening while watching the game, I was encouraged to pass on information when the action slowed down or the play stalled in the neutral zone. It was the perfect time to bring your colourman in for his thoughts just to break up the call.

Before each game, our producers prepared a script and the public relations staff provided game notes for us. In addition, I’d prepare my own notes. One set had background information on each player while the other was a separate game sheet which I did up in team colours that included the player’s current stats.

One of the most common questions I got from fans was “How do you remember all of those names?” I maintain that it’s not that difficult, so long as you have a reasonably good memory. With the NHL being the most popular hockey league in the world and its players constantly subjected to close media scrutiny, you end up remembering their names and numbers almost by osmosis. This effect is even more pronounced if you’re a sports broadcaster. On the flip side, it’s a lot more challenging to remember university or junior level players, because they aren’t subjected to constant media attention like the pros are.

However, identifying players in certain rinks proved challenging because some of the broadcast booths were afterthoughts, built as high and far back from the ice as possible. I know that anyone can make a mistake on live television, but something I find unforgivable is when an announcer misidentifies a player who shoots the other way. Anyone can recognize the difference between a left and right-hand shot so, if you’ve done your research, obvious mistakes like that shouldn’t happen.

I faced a major hurdle in the early 90’s when we covered the NHL Super Series and it was picked up by all the independent stations across Canada. These were one-game showdowns between the Canadian NHL squads and the Russian club teams. The Russians provided a phantom roster in advance, but were notorious for changing half their numbers or more on game day. Even though most viewers likely didn’t notice, I took pride in getting names right and it bothered me that I misidentified some of the players in that series.

No matter how hard you try, not every fan is going to like your style, but I worked hard to become the best play-by-play broadcaster I could be. I did this under the assumption that all my hard work would be recognized by the people making decisions for the networks and that theory worked for a while. I also believed that there was always room for improvement and that you can pick up valuable tips by listening to other broadcasts.

Play-by-play guys all have their own little quirks. For example, I insisted on having the headset microphone coming off the right hand side of my face because having it on the left always felt uncomfortable. I also learned that Bob Cole couldn’t be trifled with during a game and had a tendency to freak out if someone touched him. Because of this, the floor director had to find other ways to give him cues.

Game day almost becomes a ritual. First we attend the morning skate to determine the forward lines, defensive pairings, starting goalie and any unforeseen injuries for both teams. After the skate, we visit the dressing rooms to chat with the coaching staff and talk to the players, looking for quotes and information to use during the telecast. Then there’s a production meeting to discuss the format for the show.

After that it was time to head home or go back to the hotel to grab lunch and an afternoon nap. I’d always try to be at the rink a few hours before game time. The media is provided with a meal, and then it’s up to the press box to watch the pre-game skate. I usually relaxed by chomping on some popcorn both before the game and during the intermissions. Sometimes the on-camera portion for the show opening was taped, but later in my career we went live almost exclusively.

Excerpted from There and Gone: The Fascinating Life of a Sports Broadcaster  by Bruce Buchanan, copyright 2019. Reproduced with permission of Crossfield Publishing.

Bruce Buchanan is a retired Canadian sportscaster. He was the play-by-play announcer for the Edmonton Oilers television broadcasts on ITV, CKEM, and Sportsnet West from the 1984 until 2001. During the 1986–87 season he split play-by-play duties on CHCH-TV's Toronto Maple Leafs broadcasts with Calgary Flames announcer Peter Maher. He has also done play-by-play for the Red Deer Rebels, Winnipeg Jets, and Calgary Flames and play-by-play assignments on Hockey Night in Canada in the late 1980s. Buchanan later worked for Sportsnet, and as a sports anchor for A-Channel in Edmonton.

There and Gone: The Fascinating Story of a Sports Broadcaster

Bruce Buchanan was born in Yorkton, Saskatchewan in 1959 and grew up in Brandon, Manitoba. A huge sports fan, Buchanan realized his childhood dream and became a broadcaster. Buchanan enjoyed a thirty-year career in radio and television, the highlight being the TV voice of the Edmonton Oilers during their Stanley Cup run in the 1980’s, a feat no one can ever take away from him. Buchanan has boundless stories from his hockey past and decided to share some of his experiences. Buchanan had the pleasure of working with and meeting some incredible people during his broadcasting career, it was a great ride for him, enjoy!