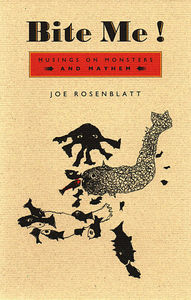 Joe Rosenblatt's final book, Bite Me! Musing on Monsters and Mayhem (Porcupine's Quill), published shortly before he passed away in March 2019, is a delight of Rosenblatt's fantastical imagination.

Born in 1933 in Toronto, Rosenblatt was a pioneer in Canadian literature, the second person to ever be published by Coach House Books, and a Governor General's Literary Award winner. His acclaimed sound poem cycle, Bumblebee Dithyramb, praised the importance of bees and nature in 1960s, showing Rosenblatt's forward thinking mindset and the love of the natural world that would eventually take him to Vancouver Island, where he lived from 1980 onwards. The author of more than 20 collections, he was mourned by many in the writing and literary community.

BC BookLook observed that Bite Me! "bring[s] together the elements... of his whole lyrical 'monsterology,' both a culmination and a continuation of all that went before". Packed with monsters, strange animals, and even carnivorous plants, it's filled with poems and musings that are uniquely Rosenblatt in style and creativity, a kind of love letter to the bizarre. Underneath the strange and even grotesque elements, emotional threads of loneliness, need, and the longing for connection resonate in rich language, arresting images, and gentle wit.

We're proud to present an excerpt from Bite Me! here today, including one of Rosenblatt's original illustrations, courtesy of Porcupine's Quill.

Excerpt from Bite Me! by Joe Rosenblatt:

I perceive the imagination as a bulbous flower that is always in need of nourishment, a carnivorous nibbler forcing me as a poet to continually search for nutrients to satisfy its insatiable appetite. For no matter how much sustenance I provide to nourish the imagination—to give but one example—by composing a sonnet, the plant issues a pitiful cry for vital grub, such as metaphors, similes, ambiguities, rhyming, half rhyme, even an answer to one of life’s dilemmas, all in the concluding couplet of a sestet.

But it seems it’s never enough for this ravenous plant. It’s as though from the outset it was intent on eating me alive. More terrifying is the fervid intensity of its hunger, for at times I have a feeling that my reflective thoughts are being nibbled away.

In a larger sense, I am in competition with myself, challenging what memorable poems I have written in the past that have enthralled me and my audience. Then I ask myself whether I am in a process of self-devourment. 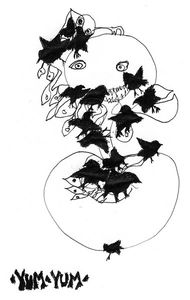 I have come to realize that I must stimulate my brain to exteriorize fresh invigorating ideas, rather than have words fail me. Fear has taken hold of me. I hear a familiar voice inside my head. Either I am conversing with myself, or it could be that the imagination has appropriated my voice.

Surely, if that is the case, I have already been eaten, but I am still there in my own embodiment, while the hemorrhaging petals of the imagination close in on themselves.

Opening its dark green calyx to the sunlight
a whorl of petals trembled as the flower spoke:
‘I’m always there for you at night,’ it whispered,
‘when you’re sad and lonely, and need a friend.’
‘I love a pale mauve sunset, don’t you?’ I said.
A fiery eye beamed inside the ovule of this plant
to dazzle me with a condescending gaze.

‘I prefer a bleeding sky in the evening,’ it replied.
‘You’d enjoy seeing all of heaven hemorrhaging?’
‘Yes,’ it hissed, shaking the pollen off its anthers.
And then I realized I was either talking to my muse
or chatting with a one-eyed monster in my noggin.
‘Don’t forget to water me,’ it sibilated frantically.
‘I need a drink sometimes, and so do you, my friend.’

This excerpt is taken from Bite Me!, copyright © 2019 by Joe Rosenblatt. Reproduced with permission from Porcupine's Quill.

Joe Rosenblatt was an accomplished author and artist who, over the course of a five-decade career, produced over twenty books of poetry, fiction, nonfiction, and visual art. He was the second poet to be published by Coach House Press, which released The LSD Leacock in 1966. Rosenblatt received several major awards, including the Governor General’s Literary Award for his poetry collection Top Soil, as well as the B.C. Book Prize for Poetry Hotel in 1986. He lived in Qualicum Beach on Vancouver Island.

In Bite Me!, idiosyncratic observations and provocative musings illuminate an unseen world of creatures both real and imagined.

This is a collection populated by eighty-foot-long boa constrictors and carnivorous pitcher plants. Of colossal clams that inhale noxious volcanic fumes and of bioluminescent ocean-dwelling critters that appear as ghostly mermaids to unsuspecting submariners. It is a collection in which the unfortunate Monster Boy copes with the consequences of schoolyard bullying—and flesh-liquefying stomach acid—while the agoraphobic Birdman ‘strives to ascend skyward’ though he is permanently grounded.

The poems and musings in Bite Me! are interested in ‘the bizarre side of Mother Nature’s handiwork’, from the depths of the ocean to the wilds of the tropical rainforest ... to the cozy hearth of the domesticated housecat. In this collection characterized by isolation and unquenchable need, Rosenblatt celebrates life in all its varied forms while awaiting that moment when ‘time drifting as a bottom feeder makes a meal of us’.