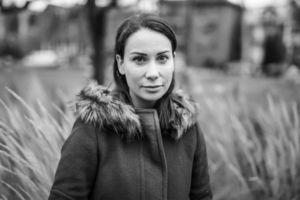 A lifelong feminist, journalist Alexandra Kimball found herself shocked by how isolated her struggles with infertility left her. In a movement that is meant to support all women, she found herself, and many other women struggling with miscarriages, infertility, and longing for a family, overlooked and excluded.

The Seed: Infertility Is a Feminist Issue (Coach House Books) is Kimball's response to an incredibly common struggle that is given little mainstream attention or sympathy, even as the stigma of infertility, and potential pathways like IVF and surrogacy, persists.

We're pleased to welcome Alexandra to Open Book today to talk about The Seed as part of our Lucky Seven series, where we ask an author seven questions about their newest book and their writing process. Alexandra tells us about the complicated history between feminism and infertility, about discovering the numerous but often erased voices of infertile women in feminism, and the happy ending to her own story of family building.

I wanted to write the book about infertility I would have liked to have read while I was struggling, but never found. Something intimate, honest, and very politically feminist. There’s a standard narrative in infertility writing that positions the ideal outcome as a pregnancy after successful IVF, and a lot of patience and prayer, and any other outcome–such one like mine where I built my family through surrogacy–as a last resort. I wanted to challenge that, and champion families like mine that came from struggle and audacity and being clever and fighting hard. To me, that was a way of applying a feminist ethics of difference and out-loudness to the traditionally patriarchal project of building a family.

Starting my research, I wanted to understand why infertility was such a marginal and misunderstood issue within mainstream feminist discourse. There had been such progress in feminist theory towards validating motherhood as a choice, and honouring the stories and challenges of mothers. And there had always been great support among feminists for women who chose to forego motherhood. It seemed curious and possibly telling to me that there was no comparable feminist discussion of the struggles of infertile women who wanted to have children, but could not. And the stuff that did exist about infertility within feminist scholarship was really stigmatizing and prurient, framing us as either victims of male-dominated medicine or patriarchal collaborators. So I set out with a number of linked questions about what this exclusion might mean. What does the silence around infertility in feminism tell us about how we understand motherhood? What does it say about how we define femininity, and the female body? And what does it tell us about possible limits in feminist theory and praxis?

These questions got more complicated the further I got into my research. I found, for example, that vilifying infertile women has been nearly universal throughout history, and that much of feminist discourse had unthinkingly repeated the tropes of infertile women as evil devourers of other women’s children (see: The Handmaid’s Tale). I also found that, like other kinds of women who were sidelined and erased from mainstream feminist history, attempts by infertile women to question and refine the feminist discussion of conception and motherhood were thwarted. Ultimately, I discovered that infertility can have as much to say about feminism as feminism can about infertility... if the right people ask the right questions, and if the voices of infertile women are centred.

I started researching this on a hunch—that the perspectives of infertile women had been excluded from mainstream feminist discourse on motherhood and reproduction—and so I felt pretty vindicated when I discovered that not only was I correct, but that I wasn’t the only infertile feminist that had discussed this (and been upset about it).

Finding that there are others who have had the same weird suspicion you’ve had is a really validating moment as a writer. For example, I knew about radical anti-technology feminists opposing IVF in the 80s and 90s—in Europe, this even led to IVF clinics being bombed—but I didn’t know that many infertile feminists had spoken out about the problems with this, and as a consequence, essentially been erased from the mainstream narrative about infertility. I knew that the grassroots women’s health movement (think: Our Bodies, Ourselves) had minimized infertility and miscarriage within their activism... but I didn’t know that other feminist scholars had already analyzed this. Finding these kindred voices—other feminist women with infertility who were hopping mad about feeling erased from their movement—was a really cool moment in my research, and I’m thrilled I got to publicize them in my book.

I’m very lucky in that my husband and family understand and support my weird writerly habits. Basically, in order to knock off a substantial section of writing or a feature-length story, I need a blocked-off period of time, around four days, in which no one really talks to me or demands anything of me. I work in a common area of our home, so other people try to stay away from me while I’m pacing and reading and just kind of thinking. I go to bed late, I sleep late, I drink tons of coffee and eat only snacks like popcorn, I read on my phone... I basically check out of anything in the real world while—I guess—ideas kind of congeal in my mind. And then at the end, I write it all down, and there’s usually something workable there.

It’s an odd process and difficult in terms of having a regular life, let alone parenting, but my best work has always happened as a result of this sort of allowing myself to enter vampire-hermit mode for necessary periods of time.

I take breaks if I feel blocked. I figure there is a greater logic at work, and there’s a part of my brain that I can’t access that is working that out, so I do other things while that unconscious process is at work. Doing something completely different usually helps, like exercise, or listening to music. I have a list of albums that I want to hear that I’m constantly updating and if I’m feeling a little blocked I’ll read reviews and add to the list and if I’m super blocked I’ll pick an album and start listening. I feel like it switches my brain into a different mode so the writing part can do what it needs to do undisturbed.

This is a cliché, but In Cold Blood sets the example for nonfiction that does something. Capote takes you through this grisly, incomprehensible mass murder, only to wind up creating tremendous empathy for the murderers, who were shaped by early experiences. Ultimately, he poses questions about the death penalty, our indifference towards poverty and mental illness and child welfare... and he does this without losing sight of the tragedy of the fact that innocent people were murdered. It’s really just a wonderful example of how literature can change how people understand very real world issues in policy and law.

A lesser-known nonfiction book that blew me away was Ivan Coyote’s Tomboy Survival Guide. Coyote’s writing style is very much in the storytelling tradition... it’s conversational, humble, and intimate. But this has the effect of drawing the reader in so that you have no choice but to be in their shoes. They are non-binary, and their account of what it feels like to be misgendered is so vivid and wonderfully rendered, I felt like I... got it, as much as a cisgender woman can get something like that. I came out of that book a different person than I was going into it, and that to me is exactly what good stories can do.

The Seed was my last planned project before having my son, so I’m currently just on extended maternity leave and enjoying full-time parenting.

Alexandra Kimball is a magazine writer and editor in Toronto, and has received seven National Magazine Award nominations. Her journalism and essays appear regularly in major publications across Canada, including Chatelaine, The Walrus, Flare, and Reader's Digest . She is currently an Associate Editor at Toronto Life magazine.

The Seed: Infertility Is a Feminist Issue

Notes on desire, reproduction, and grief, and how feminism doesn't support women struggling to have childrenIn pop culture as much as in policy advocacy, the feminist movement has historically left infertile women out in the cold. This book traverses the chilly landscape of miscarriage, and the particular grief that accompanies the longing to make a family. Framed by her own desire for a child, journalist Alexandra Kimball brilliantly reveals the pain and loneliness of infertility, especially as a lifelong feminist. Her experience of online infertility support groups - where women gather in forums to discuss IVF, surrogacy, and isolation - leaves her longing for a real life community of women working to break down the stigma of infertility. In the tradition of Eula Biss's On Immunity and Barbara Ehrenreich's Bright-sided, Kimball marries perceptive analysis with deep reportage - her findings show the lie behind the prevailing, and at times paradoxical, cultural attitudes regarding women's right to actively choose to have children. Braiding together feminist history, memoir, and reporting from the front lines of the battle for reproductive rights and technology, The Seed plants in readers the desire for a world where no woman is made to feel that her biology is her destiny.