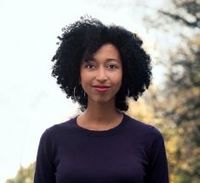 In The Shadow (House of Anansi Press) by Melanie Raabe (translated by Imogen Taylor), a woman is walking to work when she is approached by a stranger and told that she will murder a man named Arthur Grimm on February 11. She shakes off the eerie encounter — until shortly later, when she meets a man named none other than Arthur Grimm.

From this deliciously creepy premise, Raabe, a blockbuster bestselling author in Germany, spins a tense and compelling web, exploring ideas of revenge, forgiveness, and chance. Raabe's previous novels, The Trap and The Stranger Upstairs, have earned her an international reputation as a master of suspense and tension, and The Shadow proves she has no shortage of twisty, brilliant, page-turning ideas to send a shiver down readers' spines.

We're incredibly excited to kick off the New Year with a discussion of The Shadow with Raabe, as part of our Long Story interview series for novelists. She tells us how she fell in love with Vienna, where the novel is set; why she would never "dare to start writing a big mystery without knowing the solution"; and why it's important to celebrate the writing process itself, not just a book's eventual reception. 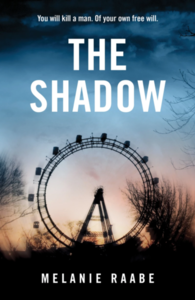 I usually start with what feels to me like the heart of the novel, in order to explore the right sound and the novel's feel before I really dive in. This is why I sometimes begin in the middle. But with The Shadow, the prologue provided the perfect opportunity to create the right atmosphere, the right mindset – for the reader and for myself.

The prologue takes us to a frozen lake in the middle of the woods, and we witness a first person narrator – we won’t know who he or she is for quite some time – standing there, gazing up to the stars, waiting for someone who doesn't show. The narrator is furious and vengeful and makes the decision to destroy the life of a certain Norah. Who, as we realize in the next chapter, is the novel's protagonist. Many parts of The Shadow took a lot of work and many rewrites, but this chapter just came to me. It was surprisingly easy to write, and I changed practically nothing.

When I had the idea for The Shadow, I was on a book tour through Europe for my previous novel. I had been thinking about the right setting a lot. It was clear to me from the beginning that the city I would choose would be extraordinarily important, serving as a character in and of itself, in a way. I was looking for a city that's beautiful, majestic and grand, with lots of history and charm. But I also wanted a backdrop that felt eerie at night. There's a lot to choose from in Europe, and at first I thought of Prague, maybe Paris. But when I arrived in Vienna for my book tour one dark afternoon in November and wandered the streets, I knew it had to be Vienna. While staying in the city, taking in its beauty, eating Strudel and learning about the Viennese's self-professed love for the macabre, I knew I had come to the right place. I really fell in love with the city and came back for research (and Apfelstrudel) a lot.

For me there's a lot of adventure while I'm writing, since I usually start before I am completely ready. Probably because I suspect that otherwise I'd never write one word. So I may not know everything yet, but I always know the ending before I set out to write my first draft. The Shadow, like most of my novels, starts out with a big secret. I wouldn't dare to start writing a big mystery without knowing the solution. I would be way too afraid of realizing after a couple of months or years of writing, that I don't know the solution, either! So, I had the ending planned out from the start and basically stuck with it.

Well, the names of my characters have always been very important to me. It can take me months to get them right. For a long time I was struggling with my protagonist. After quite some time of writing I realized what was wrong. She had the wrong name. It was a lovely name, but it didn’t fit her. I stopped writing to ponder the right name for her. Once I realized a couple of weeks later that her name was Norah, not what I had imagined before, this was a huge aha moment. And once I got the name right, this character came to me, almost fully formed. The resistance was gone. The magic of names! I found that very interesting.

Absolutely! Finishing the first draft is a very important step to me. A sculptor works with certain materials. I, as a writer, have to create my own materials. That's what I do when I write my first draft. Once I have produced the clay I can work with, the magic of draft two and three can begin. It's very rewarding, very difficult work, producing a first draft, and I like to celebrate with a lovely meal, once this is done. Champagne doesn't hurt, either. It usually takes me a total of four or five drafts to get it right, but I only celebrate the first and the last. Celebrating these milestone might sound a bit self-indulgent. I think it's important though. It helps me remind myself to celebrate the progress, the work itself – not just its reception.

I did. I chose two, actually.

When I was trying to figure out not just the plot but also the theme of the novel, I came across a short poem by Stephen Crane, In the Desert. I found it really striking. At the same time a line from a song by Björk came to mind: I'm a fountain of blood in the shape of a girl.

The poem and the lyric allude not only to the journey my protagonist is on and the emotional baggage she carries, they also relate to themes of the novel. Human nature, darkness, forgiveness for others and for ourselves – to name a few.

Melanie Raabe is the internationally bestselling author of The Trap and The Stranger Upstairs. The Shadow, her third novel, spent eighteen weeks on the Der Spiegel bestseller list when it was published in 2018. She lives in Cologne, Germany.

Ruth Ware meets Shari Lapena in this internationally bestselling psychological thriller about the inescapable pull of destiny and revenge.

Norah Richter has recently moved from Berlin to Vienna, hoping to put her old life behind her. While walking to her new office one morning, Norah is approached by an elderly homeless woman who utters these chilling words:

On the eleventh of February, you will kill a man called Arthur Grimm … With good reason. And of your own free will.

Norah is unnerved — many years earlier, something terrible happened to her on February 11 — but she chooses to shrug off the encounter as mere coincidence, until a few days later when she meets a man named Arthur Grimm.

Soon Norah begins to have a dreadful suspicion: Does she have a good reason to hate this man she’s never met? Could he be responsible for the tragic event in her past? And can Norah make sure that justice is done without committing murder?