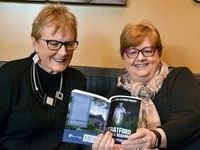 While it may have received a moment of international media interest for being the birthplace of pop star Justin Bieber, the small southern Ontario town of Stratford has been a legendary hub of top-tier arts and theatre for more than six decades. Half a million visitors flock to its picturesque streets every summer to enjoy the world famous Stratford Festival, enjoying all the eating, drinking, and shopping that usually accompanies a day or evening of live performance.

But what about the rest of the year? Authors, culinary veterans, and proud Stratford residents Phyllis Hinz and Lamont Mackay pull back the curtain of Stratford in the "off-season" in their book Stratford for All Seasons: Theatre and Arts (Blue Moon Publishers), revealing a rich and wonderful bounty of cultural events happening around town. Even long-time Stratfordites may be in for some surprises within its pages.

We're very excited to have Phyllis and Lamont at Open Book today to talk about their experiences writing and publishing as part of our Going Pros and Cons interview series.

They discuss a frustrating experience on a cross-Canada publicity tour, the joys of gathering material before writing, and why the work of creating a book never really stops.

Going Pro(s and Cons) with Phyllis Hinz and Lamont Mackay:

A big writing/publishing disappointment we remember and how we coped:

When we self-published our first cookbook, we hired a design company, a printer, and a publicist. We arranged to get the books into stores through a distribution company. The cookbook included recipes that we paired with travel stories about our motorhome adventures all over North America. It was quite natural for us to hit the highways in our RV for a publicity tour from Ontario to British Columbia.

Months prior to our departure, we made an appearance at our distributor’s office in order to promote our cookbook to the sales representatives. We even prepared yummy finger food to win them over. The distribution company assured us that by the time we were to begin our publicity tour, the books would be in bookstores across the country.

When they weren’t in bookstores in Ontario, we worried about the lost sales but assumed that by the time we reached Manitoba, this would be rectified. In Winnipeg, the minute our segment on early morning television was a wrap, we dashed to the Chapters store to autograph copies of our book. We were eager to be there before the television viewers arrived. To our dismay, our book was not on display. We asked about it and were told that it might be in the back somewhere, but no effort was made to find it. Without books in the stores, we would see no return on our investment. We were desperate. We contacted the sales rep for the area. We left a message on Heather Reisman’s phone. We explained our dilemma, that promises had been made, that we were on a cross-country tour, and that we were making every effort to stop into every Chapters store along the way to autograph our books. Heather said she would investigate. From that point on, our books were on the shelves in her stores all the way to the west coast.

Our favourite part of the publishing process:

Our favourite part of the publishing process is gathering the material. The process is exciting because it usually involves travel, visiting new places, and meeting new people. When we sit down to our computers, we turn our adventures into words so that others can enjoy them too. As two writers telling one story, we bring two perspectives to the page. With many years of practice and collaboration we have found our own unique style and voice. One of us writes a draft that the other edits. Back and forth we go until we are happy with the result. We work hard to find just the right words, building perfect sentences to tell the story. At the end of it all, we’re still friends.

The advice we would give someone publishing a book for the first time:

Our advice is that when you think it’s over, it’s never really over. The writing may be difficult and time consuming, but without marketing, all those hours sitting in front of a computer are wasted. Marketing is the biggest part of writing a book. In the end, is it worth it? Absolutely!

Anyone who is considering writing a cookbook should be aware that after publication the promotion always involves cooking. We learned quickly that when it came to appearances on television to promote our cookbooks, it usually meant very early mornings. As cookbook authors, we were expected to cook on camera and prepare several dishes in a five-minute segment. This meant that not only did we have to bring raw ingredients for display, we had to bring another set of measured ingredients to prepare on camera, and we had to have a third set of ingredients, cooked in advance to display as the finished dish. Cookbook interviews require a lot of work. And, because our cookbooks involved travel stories about our adventures in a motorhome, we were expected to arrive at the studio in our RV that was the size of a city bus. How we envied authors who walked in with their memoirs or books of fiction under their arms. Today, we are those authors, with our Stratford For All Seasons series of guidebooks.

There is something magical about returning to a familiar place. A place where you were born and where your relatives have always lived. A place you move back to after many years away. The magic happens when you realize it’s the same place but delightfully different. Phyllis Hinz was born in Stratford and grew up in Perth County. After high school, and a short career in banking — with a stint as a teller in Stratford — she groomed racehorses, worked at Disney World, attended Wilfrid Laurier University, and earned a degree in creative writing at the University of British Columbia, where she met Lamont Mackay in a writing course. Together, they travelled throughout Europe for nine months, owned five restaurants in the Kitchener-Waterloo area, explored Canada and the United States in a motorhome for nine years, and owned a test kitchen on the north shore of Lake Erie. Phyllis moved back to Stratford in 2018.
Phyllis is the author of Stratford For All Seasons: Theatre & Arts and Stratford For All Seasons: Secrets & Surprises.

Lamont Mackay is known as the note-taker. You will recognize her around Stratford as the person with the notepad and pen. With her travel-writer’s perspective and passion for adventure, she is astounded by the volume of things to see and do in her city. While teaching high school English in Surrey, British Columbia, Lamont was bitten by two life-altering bugs: food and travel. Travels in Europe with Phyllis Hinz led to an exciting culinary partnership, with restaurants and a catering company in St. Jacobs and Kitchener-Waterloo, ON. Lamont and Phyllis were branded “The Cooking Ladies” by the editor of a magazine in which they would write a culinary-travel column for twenty-five years. They have also coauthored ten cookbooks and have been published in newspapers and magazines across Canada and the United States. Lamont is the author of Stratford For All Seasons: Theatre & Arts and Stratford For All Seasons: Secrets & Surprises.

- a frustrating experience during a cross-Canada publicity tour

- the joys of gathering material before writing a book

- why the work of creating a book never really stops

Stratford for All Seasons: Theatre and Arts

Stratford for All Seasons, Theatre & Arts, shares the immensity and diversity of the theatre and arts scene in Stratford, Ontario. It is extraordinary to have culture of this magnitude in a city with a population of approximately 32,000. Many of the 500,000 annual visitors to the city who attend the Stratford Festival, as well as many busy Stratfordites, are not aware of the countless cultural events available to them year-round. Stratford is not your pop-up tourist town. This quiet, scenic city in a rural setting has remained true to its roots even though thousands of people visit each year from around the world. Ever since the days of early settlement in the 1830s, Stratford has been a place where forward-thinking citizens seized opportunities to benefit their community.

This book is about the cultural happenings in Stratford that will make you say, “Wow.”

Written by travel writers Phyllis Hinz and Lamont Mackay, this book is a companion to others books in the Stratford For All Seasons series.