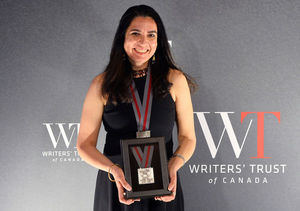 Last night in Ottawa, politicians, writers, and diplomats gathered at the Fairmont Château Laurier for one of the year's glitzy's and most-coveted social events: Politics & the Pen. A fundraiser for the venerable author-focused charity the Writers' Trust of Canada, P&P (as it's known in the capital) features the presentation of the Shaughnessy Cohen Prize for Political Writing (sponsored by CN).

The 2018 winner of the $25,000 prize was veteran Toronto Star journalist Tanya Talaga, whose powerhouse of a book, Seven Fallen Feathers: Racism, Death, and Hard Truths in a Northern City, published by House of Anansi Press, has attracted non-stop honours since its publication, winning the RBC Taylor Prize and being nominated for the Weston Prize for Nonfiction and the BC National Award for Canadian Nonfiction previously. The book tells the story of seven Indigenous high school students who died in Thunder Bay, Ontario between 2000 and 2011, whose deaths had previously received little attention outside the area.

A jury composed of University of Victoria professor of Indigenous governance Taiaiake Alfred, former Shaughnessy Cohen Prize winner and University of Toronto professor Joseph Heath, and political journalist and commentator Kady O’Malley selected the winner. In their citation, they praised Talaga's "powerful book" for its examination of "the realities of Canadian racism, complicity, and Indigenous suffering," noting it is "also a testament to the resilience of the Anishinaabe families who endure the crushing impacts of historic and contemporary injustices."

Seven Fallen Feathers, they noted, is "s a crucial document of our times, and vital to the emergence of a true vision of justice in Canada."

The four nominees featured on the shortlist with Talaga, who will each receive $2,500 in recognition of their work, were:

More than a quarter of a century later, from 2000 to 2011, seven Indigenous high school students died in Thunder Bay, Ontario. The seven were hundreds of miles away from their families, forced to leave home and live in a foreign and unwelcoming city. Five were found dead in the rivers surrounding Lake Superior, below a sacred Indigenous site. Jordan Wabasse, a gentle boy and star hockey player, disappeared into the minus twenty degrees Celsius night. The body of celebrated artist Norval Morrisseau’s grandson, Kyle, was pulled from a river, as was Curran Strang’s. Robyn Harper died in her boarding-house hallway and Paul Panacheese inexplicably collapsed on his kitchen floor. Reggie Bushie’s death finally prompted an inquest, seven years after the discovery of Jethro Anderson, the first boy whose body was found in the water.

Using a sweeping narrative focusing on the lives of the students, award-winning investigative journalist Tanya Talaga delves into the history of this small northern city that has come to manifest Canada’s long struggle with human rights violations against Indigenous communities.

A portion of each sale of Seven Fallen Feathers will go to the Dennis Franklin Cromarty Memorial Fund, set up in 1994 to financially assist Nishnawbe Aski Nation students’ studies in Thunder Bay and at post-secondary institutions.