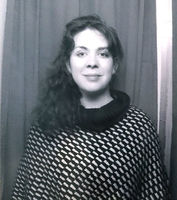 She writes, she draws, she starts record labels -- is there anything Tyler Clark Burke can't do? The multi-hyphenate artist has now added another line to her impressive c.v. with the charming, wacky, colourful picture book Bill Bowerbird and the Unbearable Beak-Ache (OwlKids).

In the book, the titular Bill finds himself having a rough day with his very bad beak-ache, but with the help of some friends (including a zebra and yak) he learns about staying positive in tough times. Fun and vibrant, the book is creative and full of energy. It's also a neat way to talk about animals with the little ones in your life (bowerbirds are a fascinating species known for their colourful nests).

We're excited to have Tyler on Open Book today to take our Dirty Dozen challenge, which asks authors to share 12 unexpected facts about themselves. She tells us about one very hardcore way to get over a fear of public speaking, her family connection to The Maltese Falcon, and "the Winnipeg Raft Race".

Tyler Clark Burke is a writer, illustrator, designer, and freelance brainstormer. She co-founded the internationally acclaimed record label Three Gut Records (with The Constantines, Jim Guthrie, and Oneida), then sold her part to make art. Tyler has worked as a creative director and art director, has won numerous awards for her cover designs, and her art has been shown and collected internationally. Bill Bowerbird and the Unbearable Beak-Ache is Tyler’s first picture book. She lives in Toronto, Ontario with her husband and two children.

Bill Bowerbird and the Unbearable Beak-Ache

Bill has a terrible, unbearable, lousy beak-ache. He also happens to be a bowerbird: a type of bird that collects scraps to create elaborate color-sorted nests. So Bill turns to his friends the zebra, frog, yak, and others for objects that might help alleviate his ache. Nothing works. But as it turns out, the pain is from a new tooth! The ache goes away on its own.
This fun, wacky story is told in playful cadence with rhyme and refrain. Artwork is deliberately childlike, stylized in bold, energetic colors just like a bowerbird’s eccentric nest design. A riot to read, this story also offers some wisdom on getting through tough times: patience, and a little help from your friends.