Aaron Kreuter's debut collection, Arguments for Lawn Chairs (Guernica Editions) is filled with poems that take contemporary themes and references in unexpected, playful directions. From Dumbledore to Beowulf, Queen Street garbage to Sudbury ponds, these poems are urgent and clear-eyed, buoyed by subtle humour and genuine emotion. Political, personal, and surprising, it's an exciting debut. 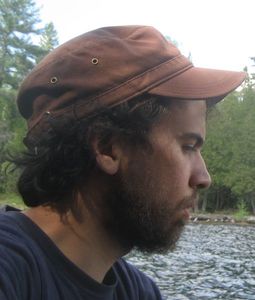 We're pleased to welcome Aaron to Open Book today as part of our Entitled Interview series, to talk about his memorable title and how it came to be, as well as the collection itself. He tells us about how the title connects to an Irving Layton quote, what functions a title ought to serve, and the original working title for Arguments for Lawn Chairs.

My newest book—which is also my first book!—is a poetry collection called Arguments for Lawn Chairs. I came to it during the editing process, and in collaboration with my editor at Guernica Editions, Elana Wolff. It took quite a long time to arrive at the particular formulation that became the title, but as I was working on the poems with Elana, I kept circling around a number of themes that seemed prominent: the environment (as in the “eco-”), materiality (poems about plastic, wood, condoms, tailing ponds), the subversive potential to use/see something in an unintended way, poetry as argument. The title most directly relates to some lines at the end of the poem “Winter Cottage (For IL),” where, in an allusion to Irving Layton, the speaker says: “Take a plastic lawn chair,/ and, like some tearful madman,/ never far from silence,/ begin fanning the flames.” The flames of what exactly, you'll have to read the poem to find out...

A title can do many things. Titles can be simple or complicated. Titles can turn a poem into an argument. Titles can burn a poem into dust. Titles can seem innocent enough, but after reading the short story that is attached to it, a title can come roaring to violent life, knife in hand. I know some writers who have trouble with titles and who don't put much stock in them; while there have been titles I've struggled with, for the most part it's been the exact opposite with me, on both counts. Titles, for me, are their own special genre, with their own rules and expectations (rules and expectations that can be deliciously broken). In fact, I'd say it's second nature for me to think in titles. “That would make a good title,” I probably think/say a half-dozen times a day (and, sometimes, whatever prompted me to say/think that does indeed become a title). Whenever I'm teaching a short story, poem, play, or novel, at one point in the discussion I usually lead us back to the title: in its ability to highlight a theme, to give a different angle to a character, to act as a door that doesn't exist anywhere else, titles at once act as shorthand for the text and as a part of the text itself.

As I think is clear from my above answer, I place a lot of importance on titles. Sometimes, a poem or a story will start with just that: the title. Other times, the title will remain elusive throughout the writing, drafting, and rewriting, and will go through many iterations until the just right title is found. The question of my 'favourite' title is hard, though. I love so many of my titles in so many different ways. Some titles from Arguments for Lawn Chairs that still give me a jolt of satisfaction when I encounter them are “Continental Drift” (about spending a lonely Friday night at the Royal Ontario Museum), “An Optimist Thinks About Plastic Water Bottles,” “Against the Grain” and “With the Grain,” two poems about wood, clearcutting, and guilt, that act as mirrors of each other, and “Song of the Condom Thrower.” A newer poem of mine whose title I'm jazzed about (and which I worked a long time one, honing it until it was just right) is called, “My Father Philosophizes About The Ocean to Steph's Aunt And Uncle, Who We Just Ran Into At The Cheesecake Factory And Who, After Telling Us About Their Post-Breast-Reduction Sex Life Using Quite Graphic Language, Mentioned They Never Go To The Beach, Even Though Here We Are, In Florida.” Finally, I'm quite smitten with the title of the closing novella in my forthcoming short story collection, “Chasing the Tonic,” which is about a van of young women who follow the fictional jamband Grizzly around the continental United States, searching for musical highs, love, belonging. And I just realized that, in making up the band Grizzly, and inventing an entire catalog of songs, I gave myself the opportunity for a frenzy of no-holds-barred title-making.

There's so many to choose from. A good title, even one just glanced in passing as I rush through the library stacks on my way to somewhere else, will stay with me for days, stuck in my mind. Thane Rosenbaum's Second Hand Smoke — about second-generation Holocaust survivors — is an amazing title, one that gets me every time. I love titles that seem to mean one thing but then, after reading the novel, means another entirely: Elena Ferrante's My Brilliant Friend is a great example of this. Any title from Mavis Gallant, really.

For a long, long time, the title of Arguments for Lawn Chairs was actually Escape Plans. That was the title I had when I originally put the disparate poems that became the book together, when I was submitting it, reworking it, submitting it again. Only after it was accepted by Guernica Editions did the title change. One of the only vestiges of that title remain in the poem “Escapology.” Elana, my editor, felt that Escape Plans wasn't true enough to the actual content of the poems, and she was right. The book is definitely more of a lawn chair than it is an escape plan.

I have a collection of short fiction, You and Me, Belonging, coming out with Tightrope Books in spring 2018, which I am very excited about. I am also working on another collection of short fiction, a connected cycle of seven and a half stories that deal, perhaps in the fullest way yet, with the themes that I've been obsessed with my whole writing life: Jewish North Americans; unrequited love; being young and privileged and discovering the world's political, social, and cultural horrors; the giant, looming shadows of the Holocaust and the Israeli/Palestinian conflict; marijuana. The collection is at the moment untitled, which causes me no lack of anxiety. Title Anxiety (another great title!). Parking Lots, a new collection of poetry, is slowly coming together.

Aaron Kreuter resides in Toronto. His poems have appeared in Best Canadian Poetry 2014, subTerrain, carte blanche, and Vallum, among other places. Arguments for Lawn Chairs is his first collection of poems.