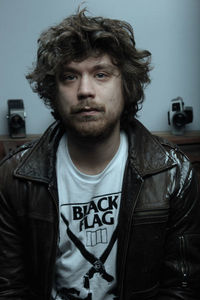 In his literary debut, Berlin-Warszawa Express (ECW Press), musician and songwriter Eamon McGrath tackles a question that plagues artists in every medium: does art necessitate suffering? He wonders if there a purpose to the isolation and loneliness that comes with the artistic lifestyle - especially the long tour away from home.

Fictionalizing his own experiences and those of his friends and colleagues, McGrath explores the strange remove of the touring musician's experience and its emotional repercussions. Traversing the gritty venues of hip European music scenes via the titular train route, the fictionalized memoir is an anguished love letter to the sacrifices art demands of those it inspires.

We're pleased to have Eamon on Open Book today as part of our Entitled interview series to talk about the route that inspired his title and more. He tells us about the beat poet referenced in the title, explains why a classic American novel title has stuck with him, and shares some possible names for upcoming books and albums.

What in your opinion is the most important function of a title?

A title should suggest what a story is about but also not give any of it away. It should be a sweeping generalization, and also reflect with pinpoint accuracy the contents of the work. The best titles are multi-layered and paradoxical, specific yet open-ended. The Catcher in the Rye, for example, is a great example of that: it alludes to a minute detail of the book, that’s an integral part of the story of Holden Caulfield’s journey through New York City; but it actually has nothing to do with his three days spent there specifically. It draws you into the story itself, in a search for the connection between the title and the relationship to the story, and once you understand that small and detailed connection between those two things you understand the story and the message behind it so much better.

What is your favourite title that you’ve ever come up with and why?

I have a song called “Running From the Cops” that I’m pretty proud of. It’s about a deteriorating relationship, in the sense that the two people in the song are under a figurative “arrest”, like their love itself is running from the law in a last-ditch attempt at freedom. But it’s also like the two characters in the song could be Bonnie and Clyde, running together from the authorities, their lawlessness what keeps them together. It’s also about the thrill of being in the midst of a high-speed chase. It’s about all these things, and none of them at the same time; at its simplest form it’s also just about getting dumped, being really down and out.

What about your favourite title as a reader, from someone else’s work?

I’m a huge Replacements fan, Paul Westerberg is kind of the pinnacle of the rock and roll literary world in my opinion. Left of the Dial is a great title. Again, it’s alludes to everything the song is about, and none of it at all: it’s about his band tuning into college radio, on low-frequency radio stations, and hearing their songs on tour. But it’s also about how figurative “signals” fade out from one city to the other, how you meet these people on the the road who you develop these intensely personal connections with and don’t see them again till the next time you roll through town. It’s also about being totally left-field, totally out of the mainstream, and written during the Reagan era. It’s also just a great, simple rock song. So that kind of stuff I find really interesting. As far as books go I love Shakey, that biography about Neil Young: it’s his nickname—Neil’s friends call him Shakey, his film production company is Shakey Pictures—but it’s also such a great description of how the book itself is written, it’s this jolted, almost jaundiced, frantic book that jumps in and out of a non-fiction biography, to music industry mythologies, to straight-up music journalism, sometimes within the span of a single paragraph. The Catcher in the Rye, like I was saying earlier, is also a great title: so mysterious, so murky, so unassuming, yet so important to the message and content of the story. I love that kind of stuff.

Before the working title of Berlin-Warszawa Express, it was only untitled. Just pages and pages of hungover, handwritten scrawl. When I finally typed everything out, and arranged it into a cohesive narrative, that was the only thing that came to mind. It just shone so brightly on the page compared to all the darkness around it. It had a rhythm, it had a pulse, it had a direct correlation to the narrative, it had a “Z” which looks good from a design perspective, it was perfect for the story.

At the moment I’m working on two separate possible follow-ups to Berlin-Warszawa Express, both with only working titles: one draft is currently called Riding the Dog and the other draft is currently called Wealth. Both will probably change drastically though, and so the titles will most likely follow suit. I’m also working on the follow-up to my last album, which was called Exile, and the working title for that has been Just Kids—kind of an allusion to what you spend your 20s being, just a kid. Trying to let people know they don’t have to grow up too fast.

With over 300 songs written and recorded, album of the year credits, multiple continent-spanning tours, Eamon McGrath has developed a body of work that could rival that of any artist 15 years his senior. This is the house that punk rock built: a fierce DIY attitude and constantly changing style has guided McGrath across the globe on countless tours, stories from which were cultivated in innumerable journal entries and song lyrics, eventually becoming the evocative and emotional journey that forms the backbone of Berlin-Warszawa Express. He is based in Toronto, Ontario.

While touring Europe, Eamon McGrath wrestled with one of the biggest questions on the mind of any touring artist: should you suffer for your art? The pain and heartache that goes along with a working musician’s lifestyle must serve as a means to some kind of cathartic end, McGrath argues — otherwise that torment served no purpose. In Berlin-Warszawa Express, McGrath fictionalizes experiences from his life and the lives of his peers to seek out meaning and significance in the tumultuous and emotional experience of living on the road.

From boozy techno-fied weekends in Berlin, to punk squats in Prague, to the alleyways and barrooms of Vienna, McGrath chronicles the dramatic changes in emotion and culture occurring on both sides of the train window in this raucous debut.