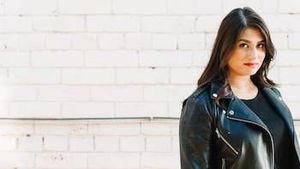 The Festival of Literary Diversity (The FOLD) is the brainchild of author Jael Richardson, who founded the festival to celebrate diverse voices and stories in Canadian literature. Now in its second year, the FOLD takes place in Brampton, one of Canada's most diverse cities, and this year will run from May 4 to May 7, with a packed calendar of readings, panel discussions, writing workshops, and more.

We're excited to speak with festival guest author Scaachi Koul today, not only because her debut book of essays, One Day We'll All Be Dead and None of This Will Matter (Doubleday Canada) is an Open Book favourite, but because Koul has been an inspiring firebrand of a writer since she started publishing (racking up credits like The New Yorker and Jezebel before she turned 25).

Currently with Buzzfeed Canada, Koul has become something of a lightning rod for issues around diversity in writing and publishing, attracting the attention of numerous online trolls. Despite the toxicity that is often involved with being a woman of colour writing online (and off), she's remained not only tough and principled, but funny. Today she tells us about how she views the FOLD, her experiences in CanLit, and which fellow author she's most looking forward to seeing at the festival.

You can catch Scaachi Koul at the FOLD on Saturday, May 6 at 3:00pm as part of The Role of Writers in Times of Trouble event (PAMA Council Chambers, 9 Wellington St. East, Brampton, ON).

This will be the FOLD's second year of programming. How do you view the festival's identity and how do you feel about being a part of it?

The word "diverse" is such an odd one, because we don’t have better language for when we discuss these things, but it’s cool as hell to be a part of something that promotes diverse writing. You don’t get a lot of that in publishing.

Tell us a little bit about the book you'll be reading from at the FOLD.

ODWABDANOTWM is a collection of essays about, amongst other things, shopping, body hair, immigrant families, fear, anxiety, loneliness, anger, depression, rape, and weddings. You’ll like it, I promise.

Part of the FOLD's purpose is to celebrate diverse stories. What has your experience in Canadian writing and publishing been, as a writer of colour? Are there positives or negatives that spring to mind? And do you think diverse stories are being celebrated in CanLit?

It’s been tricky. I get in trouble a lot for things that I know white people, and white men, would never get in hot water over. I’ve been very lucky in my career and I’m very young, but I also know there are people who won’t give my work the time of day because female memoirists are selfish (ugh) and because my Twitter account is rude (TRUE). CanLit is overwhelmingly dominated by white people, white stories, and white authors, and the institution around it is often unwilling to challenge much of the status quo.

Is there another writer or panelist at the FOLD who you're looking forward to meeting or spending time with?

Kamal! He was my first journalism teacher and I have loved both of his books so much, and he even blurbed mine (which felt really full circle). I haven’t been able to work with him in another capacity so I’m looking forward to making him uncomfortable in front of people versus just in our private interactions.

Scaachi Koul was born and raised in Calgary, Alberta, and is a culture writer at BuzzFeed. Her writing has also appeared in The New Yorker, The Hairpin, The Globe and Mail and Jezebel. One Day We’ll All Be Dead and None of This Will Matter is her first book. She lives in Toronto.

The Festival of Literary Diversity (The FOLD) celebrates diversity in literature by promoting diverse authors and stories in Brampton, Ontario – one of Canada’s most culturally diverse cities. The FOLD 2017 runs from May 4 to May 7.

For readers of Mindy Kaling, Jenny Lawson and Roxane Gay, a debut collection of fierce and funny essays about growing up the daughter of Indian immigrants in Canada, "a land of ice and casual racism," by the irreverent, hilarious cultural observer and incomparable rising star, Scaachi Koul.
In One Day We’ll All Be Dead and None of This Will Matter, Scaachi deploys her razor-sharp humour to share her fears, outrages and mortifying experiences as an outsider growing up in Canada. Her subjects range from shaving her knuckles in grade school, to a shopping trip gone horribly awry, to dealing with internet trolls, to feeling out of place at an Indian wedding (as an Indian woman), to parsing the trajectory of fears and anxieties that pressed upon her immigrant parents and bled down a generation. Alongside these personal stories are pointed observations about life as a woman of colour, where every aspect of her appearance is open for critique, derision or outright scorn. Where strict gender rules bind in both Western and Indian cultures, forcing her to confront questions about gender dynamics, racial tensions, ethnic stereotypes and her father’s creeping mortality—all as she tries to find her feet in the world.

With a clear eye and biting wit, Scaachi Koul explores the absurdity of a life steeped in misery. And through these intimate, wise and laugh-out-loud funny dispatches, a portrait of a bright new literary voice emerges.