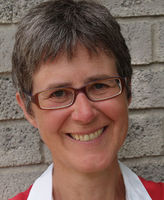 If you've ever needed a second chance to achieve your dreams, you won't want to miss Kids' Lit favourite Kathy Stinson's newest book. The Dance of the Violin (Annick Press), illustrated by Dušan Petričić, returns to Stinson's last literary subject, violinist Joshua Bell who appeared in her award-winning book The Man with the Violin, but this time takes readers back to Bell's childhood, where he enters a prestigious musical competition.

After a heartbreaking error ruins his shot at victory, Joshua gathers his courage and asks for a second chance. It's a heartwarming book that will appeal to music lovers especially, but its lessons and story are universal.

We're pleased to welcome Kathy to Open Book today to take our questionnaire, where we ask seven questions about an author's newest book, their writing life, and more. Kathy tells us about how Joshua Bell himself led her to the subject for this book, the wordiness of first drafts, and the importance of remembering past discouragement.

Dušan Petričić and I had a lot of fun, along with the folks at Annick Press, making The Man with the Violin — the book about the famous experiment involving Joshua Bell playing at a metro station, from the point of view of a child who wanted to stop and listen. After readers had had some fun reading and responding to the book, Annick Press asked Joshua Bell if he’d had another experience kids might relate to. He led us to a Time magazine story about what happened when, at the age of twelve, he entered his first big violin competition.

He had barely begun to play his piece for the judges when he made such a serious mistake there was no way he could possibly win the competition. He was about to leave the stage when he realized he still really wanted to play the piece he’d worked so hard on and loved playing. He asked if he could start again. And when he did, with nothing at stake, he played better than he’d ever played before. This experience formed the basis for The Dance of the Violin.

I suppose the question central to the book is: What do you do with failure? It’s a question that applies to music, to athletics, to any endeavour really, that a person works hard at, that can, in a single moment, go terribly wrong. I knew this question was at the heart of The Dance of the Violin, but not how I would write the story without hitting too squarely on the head, the idea of the importance and the joy of doing what you love for its own sake.

The first draft of the story started far too close to the moment when Joshua makes his big mistake, soon after he starts to play the difficult piece he has prepared. And of course like many early drafts, it was far too wordy. The first big edit involved filling in the build-up to that moment. And I had to keep working on the ending for a long time. Many attempts felt totally flat or just petered out. Others felt sharply didactic instead of capturing Joshua’s sense of triumph, of  having been transported by his music. The title presented a similar problem for a while, when it seemed the publisher and I weren’t on the same page about what was the most important element of the story, but I think we landed in the right place with it. I guess readers will let us know.

From start to finish the project took twelve months. We saw Dusan’s first rough illustrations at about the 4-month mark, and continued tweaking text as he worked to complete the artwork.

I need total quiet when I’m writing. Especially important is that there be no verbal distraction from any source that might break into the bubble of the world of my story that I have managed to enter. I generally can’t tolerate music of any kind either, because its rhythm interferes with my ability to hear the rhythm of my text. In the case of this story, however, it was helpful to listen, at times, to the piece young Joshua played for his first international competition: Lalo’s “Symponie Espagnole”.

I don’t eat when I’m writing, but I drink lots of tea — black, green, or herbal, depending on time of day and my mood.

I don’t have any interesting rituals or writing instruments to report. Does anyone care that I wrote and rewrote The Dance of the Violin on a 13” MacBook?

I remind myself that I’ve been discouraged at some point during the writing of every book I’ve written, including The Man with the Violin which eventually won the TD Children’s Literature Award. I’m also fortunate to have good writing friends who remind me of this, point out what’s wonderful about what I’m working on, and encourage me to keep on — or to walk away for a while, if they think I need a break to refresh.

A walk in the woods often allows my brain to relax and come up with an idea that might help me over a project’s rough spot. I use the Voice Memo feature on my phone to capture these ideas so can continue to relax and enjoy the walk without being afraid I’ll forget something important.

For me, a great book is one that makes me care deeply about its characters and uses language in a way that begs to be read aloud. Two that come to mind are Ragged Company by Richard Wagamese and Requiem by Frances Itani.

Most of my writing time these days is devoted to work on what I hope will become my first adult novel.

I’m also playing with a picture book manuscript unlike anything I’ve ever done before, and thinking about how I might revise a manuscript that Annick turned down recently (for what I suspect are legitimate reasons).

I also have an idea for a project that would allow me to indulge three passions at once: for photography, words, and nature.

Kathy Stinson is a familiar name in children’s literature. She wrote the award-winning Red is Best and Big or Little?—two of the first picture books for preschoolers in Canada. Red is Best 25th Anniversary Edition was released in 2006 a newly illustrated Big or Little? was published in 2009. The Man with the Violin was published in 2013. This beautifully evocative picture book tells the true story of world-renowned violinist, Joshua Bell, who conducted an experiment by anonymously playing his priceless violin in the Washington D.C. subway station. Her latest book, Dance of the Violin (Spring 2017), once again features an event from the life of Joshua Bell. This time, it goes back to his childhood when he entered a very prestigious competition. After an initial blunder, Joshua asks—and gets—a second chance to play his piece. This time, he plays it perfectly.

The Dance of the Violin

Everyone deserves a second chance.

As a young student of the violin, Joshua Bell learns about an international competition to be held in Kalamazoo, Michigan. He chooses a piece of music, that his teacher suggests may be too difficult, but Joshua is determined: it’s a piece of music he loves. At the competition, Joshua experiences the usual jitters. Once his name is called, he strides to the stage and begins to play, but almost immediately, he makes a mistake. As he is about to walk off the stage, he asks if he can try again. This time, the playing is impeccable.

Dušan Petričić’s brilliant illustrations, full of movement and color, capture the sounds made by Joshua’s violin, from the missed notes to the swirling, uplifting strains of the perfectly executed piece. Children will readily empathize with Joshua’s misstep, but they will also learn that with perseverance, second chances are possible. The story behind the story appears at the end of the book.