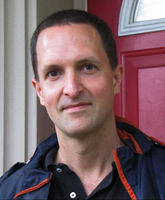 JonArno Lawson The Hobo's Crowbar (Porcupine's Quill) is an infectiously rhythmic collection of children's poetry, filled to the brim with Lawson's trademark (and award-winning) whimsy and wit. The playfulness and apparent love of language that flows through the collection is downright delightful for young readers as well as those older folks amongst us who might just want to join in. Woodcuts by Alec Dempster make a unique visual accompaniment and give a grown-up feel to the clever text.

We're thrilled to have JonArno on Open Book today as part of our WAR: Writers as Readers series, where we ask authors about their most influential, favourite, and memorable reads.

He tells us about the scene so sad it shouldn't have been written, shares some relatable Proust-anxiety (us too!), and tells us which Nobel Laureate wrote the book he loves to read over and over.

I’m pretty sure it was Peppermint, by Dorothy Grider. It was illustrated by Raymond Burns. It’s one of the best children’s books of all time and I still like reading it. But it might also have been Ant and Bee by Angela Banner (illustrated by Bryan Ward)—another one of the greats that I still enjoy.

Philip Pullman’s Amber Spyglass. That horribly sad scene where Lyra discovers the little boy who’s been permanently separated from his Daemon — it’s too sad. Philip Pullman shouldn’t have written it down or published it.

Were the Bible stories written for adults or children? Probably both. Even so, I would say the Bible stories were the first adult stories I read. I was particularly interested in what went wrong between siblings in the stories; I remember that. I still think about those stories.

Leaves for the Burning by Mervyn Wall. It’s a bleak book in some ways, but also very, very funny. Idries Shah’s Mulla Nasrudin collections have made me laugh out loud. And since we can all probably do with some more laughter in our reading lives, I’ll also mention that Thomas Bernhard’s My Prizes: An Accounting is very funny.

The Sergeant in the Snow by Mario Rigoni Stern is a book I’ve re-read many times. The King and the Corpse by Heinrich Zimmer is another.

Proust’s The Remembrance of Things Past. I know I must be missing out.

Doris Lessing’s African Laughter — a book I re-read every few years. I loved the way Lessing broke the book up into (or formed it up out of) anecdotes, short reflections, little stories. It’s a travel book, but she did a lot in that book to inform and entertain all at once. It made me relax, somehow, as a writer — I saw how it was possible to remain accessible without being predictable.

Oh, that’s hard … but On the Move by Oliver Sacks would be pretty high up there. So would Siddhartha Mukherjee’s The Gene: An Intimate History.

Born in Hamilton, Ontario and raised nearby in Dundas, JonArno Lawson is a four-time winner of the Lion and the Unicorn Award for Excellence in North American Children’s Poetry, for Black Stars in a White Night Sky in 2007, in 2009 for A Voweller’s Bestiary, in 2013 for Down in the Bottom of the Bottom of the Box and again in 2014 for Enjoy It While It Hurts. In 2011 his poetry collection Think Again was short-listed for the Ruth and Sylvia Schwartz Children’s Book Award. Sidewalk Flowers won the Governor General’s Award for Illustrated Children’s Books in 2015. JonArno lives in Toronto with his wife Amy Freedman and his children Sophie, Ashey and Joseph, all of whom assist the author with phrases, topics and sometimes even complete lines for use in his poems.

The latest wacky and wonderful collection of children’s poetry, Governor General’s Award winner JonArno Lawson’s The Hobo’s Crowbar presents a world of word botchers and bird watchers, of vile versifiers and vigilante interventionists, of nobodies and somebodies, big guys and small fries. Lawson’s world is one of logic and language, of wit and words, of contradictions and conundrums, but it is also a world in which looking and learning go hand-in-hand, with laughter never far behind.

The book is as fun to see as it is to say, and vibrant woodcuts by artist Alec Dempster are a perfect accompaniment to Lawson’s poems. Together, they help to expose the highs and lows of life, and celebrate goofiness, absurdity and the profound truth of human experience.