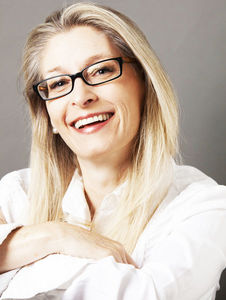 Lisa de Nikolits is the author of an impressive seven novels, each of them marked by her wild creativity and memorable characters. Her latest offering is No Fury Like That (Inanna Publications), a genre bending literary thriller that explores the possibility of second chances. Julia, the main character, is getting the ultimate second chance, as it appears that she might be, well, dead. As Julia rethinks her life and works to solve the puzzle of a string of murders, the question arises of whether she is in fact dead or whether there is something even stranger at work. John Oughton praised No Fury Like That's wickedly fun and brainy narrative, saying "Imagine if characters from The Devil Wears Prada got trapped in Sartre's play No Exit".

We're extremely excited to announce that Lisa will be part of the Open Book team this upcoming month as our writer-in-residence for November 2017.

For those of you who don't already know Lisa and her work, we're introducing her today in her own words as part of our At the Desk series, which pulls back the curtain on writers' workspaces and processes.

Lisa tells us about how some of her favourite office space decorations have travelled around the world, the importance of respecting "the magic", and why lying on the floor is an important part of the writing process.

Stay tuned to Open book throughout November for Lisa's amazing upcoming series, which focuses on noir in all its literary forms.

At the Desk with Lisa de Nikolits

Welcome to my museum of a million macabre memories and tiny treasures! And yes, I admit it, alliterations are a guilty pleasure! 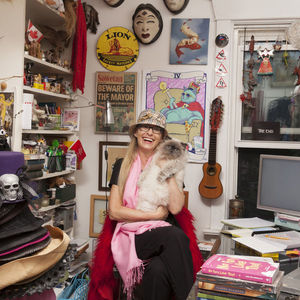 I’m going to state the obvious – I’ve never travelled lightly. Many of my treasures were shipped to Australia from South Africa and then, some years later, they made the long journey to Canada. Ridiculous perhaps, but, in the same way that I’ve never lost track of a dream or goal, I’ve monitored my memorabilia, although many of the items are from Peru, Canada, Rome, Namibia and the Far East, all places I have visited since I came to Toronto.

I’ve often wondered how I would feel if everything were to go up in flames but I’m not trying not to tempt fate by asking that question!

In the same way that I feel guilty of my fondness for alliterations, I’ve felt guilty for having so much ‘stuff’. I’d be singled out by George Carlin for sure, and made to stand up and explain myself! [Trying to Find a Place for my Stuff! George Carlin]

The thing is though, it’s all about the magic. One of my greatest fears in life is that I will carelessly allow a scrap of magic to flutter to the ground, unused, unacknowledged, dismissed and disregarded. How disrespectful! The magic must be respected!

I believe that every story is a gift and that the magic is the secret ingredient that turns my obsessions, thoughts, observations and ideas into stories. Without the magic, there would be nothing.

When we met, my husband was clear. Most of my stuff was too weird to adorn the walls of our house and the phrase ‘your room’ became a signature designation for many of my objets d’art. But, it has all worked out well, as I love being surrounded by my familiar trinkets when I work, be they demonic masks from Africa or Catholic rosaries and statues of Jesus, or antique Kewpie dolls.

What is amazing, is how much stuff I can fit into my tiny room! And I do change it up – I carefully curate the carousel of curiosities on display. 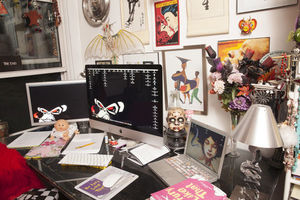 However, I don’t always write in my study. I have a dozen notepads scattered strategically throughout the house in case inspiration strikes, as well Post-it notes, an iPad and a small, antiquated Mac laptop (from about 2008), which has been a faithful coworker on many a book. It’s wonderful because the only program it can run is Word, therefore there is no temptation to check one’s email, or see if the world has ended according to Facebook, Twitter, Instagram or LinkedIn.

And I hate to admit it, but my iPhone does come in handy for making notes if I am out and about.

I do write on paper but I despise inputting to the degree that I try to avoid longhand – not to mention that my writing is so awful.

However, I’ve always had a writing space and it travels with me everywhere I go. The writing space is in my head, and all I need is a scrap of paper or a computer.

I also need printouts of my work at the various stages. I self-edit in number of ways – I read the book out loud and make meticulous notes on the pages and at the point I employ discipline to be legible. 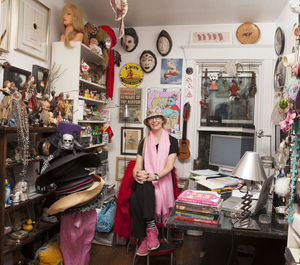 I never listen to music when I work but I chat to myself and I read out loud what I have written. I always wear a hat, I feel as if it helps me focus and I do like the comfort of a scarf. I light candles and the room starts off all neat and tidy but it quickly deteriorates and in no time at all, my study is a horrific mess of chocolate wrappers, coffee cups, papers, books, socks and cat hair. When I’m in the throes of writing, I simply don’t care how bad it gets but once the immediate task is done, I tidy it all up and start again.

There are times, when everything is a mess, the room, the writing, me, all of it. And I lie down on the shag rug ($25 from Walmart, bought because the cat loves them) and I close my eyes. Tired. So tired. Who doesn’t fall over, from time to time, from the sheer exhaustion of trying to say what you really want to say? You chase that elusive phrase, that half-formed idea but where, and how exactly, is it constructed? A child’s three-headed dragon, an inscrutable Jesus with decapitated heads embroidered on the hem of his cloak, Buddha, grinning on a spring, a range of demented dolls – the secret is there somewhere.

I’ve never travelled lightly. Dreams, memories, fears and phobias. My brain is filled with recollections and things which feel real but aren’t, I’m chased by crazy characters and their inescapable lies. But if I didn’t have my stories and my writing, my world, and my study, would be such a terribly boring place.

Originally from South Africa, Lisa de Nikolits has lived in Canada since 2000. She has a Bachelor of Arts in English Literature and Philosophy and has lived and worked as an art director in the U.S.A., Australia and Britain. No Fury Like That, her most recently published work, is her seventh novel (all Inanna Publications) and has received glowing endorsements from acclaimed international authors, Metroland Media, and high-profile members of the Crime Writers of Canada.

Julia Redner has to die before she can find these things out for herself – but is she really dead or is she being given the opportunity to rethink her life and solve an intricate puzzle of murders?